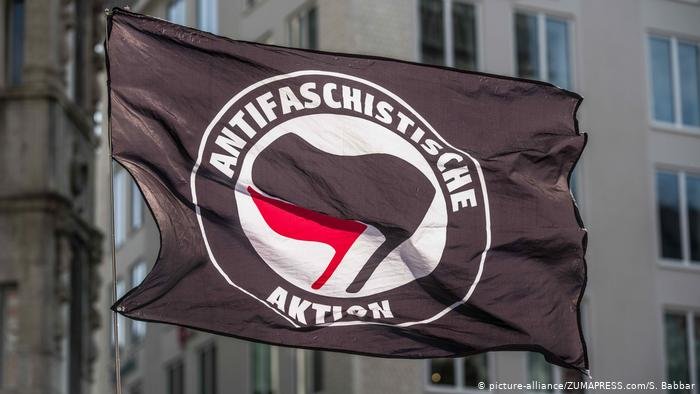 After President Trump’s tweet over designating Antifa, a terrorist organisation, it has created a turmoil amongst the left leaders, around Europe and Germany in particular.

Trump’s in his tweet said, “Consideration is being given to declaring ANTIFA, the gutless Radical Left Wack Jobs who go around hitting (only non-fighters) people over the heads with baseball bats, a major Organization of Terror (along with MS-13 & others). Would make it easier for police to do their job!”

His tweet has created a brawl over twitter’s left and right-wing politicians. While many left-wing leaders lash out Trump for his irresponsible tweet terming him as Fascist and propagator of White Nationalism in America and the world. Right-wing leaders appreciated Trump for his courageous decision.

Germany’s far-right, Alternative for Germany (AfD) party were the first among those who expressed support for Trump and called for a similar measure in Germany.

“If Antifa is finally classified as a terrorist organization in this country as well, then the currently popular hashtag ‘I am Antifa’ offers up a very rich pool of investigative leads in the fight against terrorism,” AfD parliamentarian Jürgen Braun wrote on Twitter.

“Donald Trump is making it possible, thank you very much!” the far-right politician added.

Who are the Antifa?

Antifa is short for (Anti-Fascists), it is a radical left organisation with its presence in Germany and the United States. It is a loose collection of groups, networks and individuals who fiercely oppose the far-right groups and their movements.

Their ideology belongs to the Nazi-era left, where they believe that people would’ve stopped the rise of Adolf Hitler and the Nazi Party, by actively fighting them. The group rose after WWII mostly in the 1960s in Germany, and the movement further reached the United States in 1970s. They’re known for their violent protests and resurfaced since Trump’s election, some activists with more mainstream political backgrounds have also joined their groups and rallies.

There are many civil rights organisations criticises Antifa, for their violent means, as they’re said to be focused on harassing right-wing extremists, both virtually through the social media and on-ground. They intend to spoil the right-wing gathering or raising the voices against the racists in the rallies, but their presence incites violence damaging the public properties and clashes with the police.

Their recent examples of protests are during G7 meets in Quebec, Canada and Hamburg, Germany where they created civil-war like situation.

The current political heat raises the risks of violent confrontations at protests and rallies. Antifa has extended their interpretation of fascist/fascism to cover not just white supremacists and other right-wing extremists, but also many conservatives and Trump supporters.

All forms of Antifa violence are questionable. Additionally, violence plays into the “victimhood” card for the white supremacists and other right-wing extremists. Images of these “free speech” protesters being beaten by black-clad and bandana-masked Antifa activists give right-wing extremists a powerful propaganda tool.

The Antifa reject racism but use unacceptable tactics. White supremacists use even more extreme violence to spread their ideologies of hate, to intimidate ethnic minorities, and undermine democratic norms. However, Antifa’s act is promoted as a tool to invoke sentiments against any left ideology.

Today’s Antifa argues they are the on-the-ground defence against white supremacists they believe are promoting fascism in the United States. However, Antifa, who have many anti-police anarchists in their ranks, can also target law enforcement with both verbal and physical assaults because they believe the police are providing cover for the fascists. They will sometimes chant against right-wing groups and police in the same breath.

Many of there violent tactics include throwing bricks, crowbars, homemade slingshots, metal chains, water bottles, and balloons filled with urine and faeces. They have deployed noxious gases, pushed through police barricades, and attempted to exploit any perceived weakness in law enforcement presence.

Away from rallies, they also engage in “doxxing,” exposing their adversaries’ identities, addresses, jobs and other private information. Leading to their opponents being harassed or losing their jobs. Members of the alt-right and other right-wing extremists have responded with their own doxxing campaigns, and by perpetuating hateful and violent narratives using fake “Antifa” social media accounts.

Because there is no unifying body for Antifa, it is impossible to know how many “members” are currently active. Different localities have Antifa populations of different strengths, but Antifa is also sometimes willing to travel hundreds of miles to oppose a white supremacist event.