Tempt not a desperate man﻿ 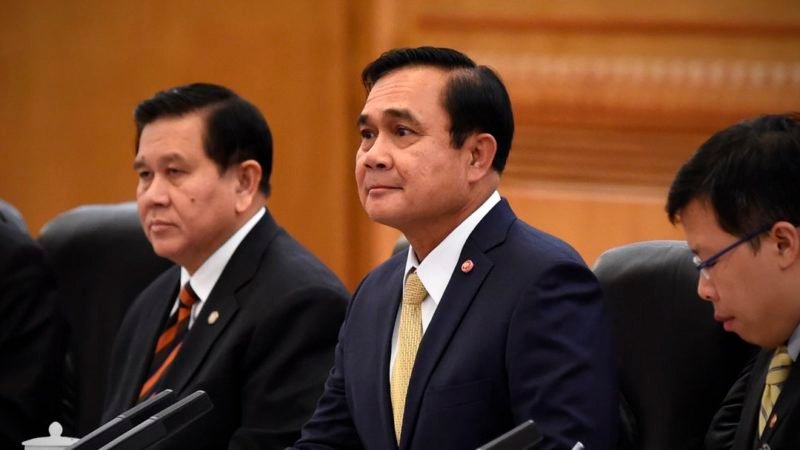 This has been Thailand’s year of living dangerously. It has seen serious diplomatic challenges, economic downturns, and a coronation attended largely by low-level bureaucrats sent over by the government; but the greatest unease has been with the first Thai parliamentary elections—of record—since 2011. As the official results came in, each major party owned its unique source of anxiety. The Democratic Party was desperate to remain relevant in Thai politics. Pheu Thai was desperate not to be dissolved as its Thai Raksa Chart allies were the week before the polls. Bhumjai Thai was desperate not to suffer the same threats of prosecution that the leaders of the Future Forward Party have faced for not playing along with the military government. And the Future Forward Party was desperate because… well, they refuse to be desperate, which makes them so dangerous. But among them all, the most desperate is the sitting Prime Minister Prayuth Chan-Ocha and his Palang Pracharat Party (PPRP).

While the PPRP was awarded the most popular votes by the Electoral Commission (EC), it only gained 116 of the possible 500 parliamentary seats, far short of the 251 needed to form a government on its own. Parties openly supporting PPRP have added another eighteen, eleven of which were given to small pro-Prayuth parties even though they did not meet their minimum vote totals. This still leaves the PPRP and its allies 117 seats short of forming a government and needing to form a coalition. These are only estimates, as the EC continues to perform recounts, tweak results, and retroactively ban newly elected opposition Ministers of Parliament. From all this, it seems that the PPRP will assemble the slimmest of majorities with the help of Bhumjai Thai and the Democrat Party—perhaps. But the worrisome question for Prayuth is why has this narrow victory taken so much effort? True strongmen shun slim victories.

A Life of Sleepless Nights

In Thai politics today, nothing is sure. It is likely that those who opposed Prayuth were more certain of his victory than Prayuth was himself. A fatalism surrounds Thai elections because incumbents tend to somehow win convincingly even if they have to overcome long odds. Prayuth has done his damnedest to do the same. In the five-year lead up to the election, the National Committee for Peace and Order (NCPO)—Prayuth’s military vehicle for governance since the 2014 coup—has tilted the playing field in its favour. The NCPO has repeatedly rescheduled elections, imprisoned those who protested the delays, appointed a pliant National Legislative Assembly (NLA) that rubber-stamped pro-government legislation, and authored its own constitution granting Prayuth absolute authority on command. And still, on the eve of the March 24th polls, no one was certain if these measures were enough, raising the junta leader’s unease.

Thais are no strangers to election manipulation and interference that preserve the status quo. But Prayuth and his PPRP allies have employed a dizzying constellation of impulsive schemes to maintain their grasp on power. The NCPO moved to crush the least public opposition, making it illegal to gather more than four people for political purposes, to flash the three-finger salute from Hunger Games, to possess Orwell’s 1984, to distribute free sandwiches, and to circulate any materials rejecting the junta’s constitution during the referendum campaign. The NCPO has also used many questionable lèse majesté, and sedition charges to silence opposition. Those fortunate to not receive long prison sentences have been assigned to reeducation programs and threatened with forfeiture of assets and property. In preparation for the new government, Prayuth has hand-picked a 250-member Senate that will help select the next prime minister; and in the election itself, the EC has interfered in vote counts, invalidated results, and defied election rules in the constitution to manufacture the NCPO’s slim advantage. None of these ploys are new to Thai politics, but the desperation shows in using them all. Prayuth has taken every autocratic trick in the Thai dictator’s handbook and applied them with relish, and yet only grabbed a one or two seat majority.

All these behaviours suggest that Prayuth is frenzied by the thought of a loss, and for good reasons. He has not been an especially effective prime minister. He has been rigid and dogmatic, and quick to rely on his absolute Article 44 authority to force through unpopular policies. More so, he has failed in his central goal to unify a country sundered by political partisanship, as shown in the tight election results. But a win is a win, right? Even the smallest majority keeps him in power, which is crucial for an autocrat who makes only staunch enemies and fair-weather allies—the alternative could be lethal. At least Prayuth did not have to nullify the whole election as the EC did in 2014, just before his coup…at least not yet. So his anguish should be soothed, yes?

Dancing on a Tightrope

Even with a victory, there are factors that keep Prayuth awake at night. For one thing, his honour is at stake. In Thailand, “losing face” does serious damage to a person, especially a person of high position. The more that he and the PPRP have to go around begging unaligned parties to join his coalition, and the more favoured cabinet seats the PPRP must surrender to achieve this, the more feeble and shamed Prayuth seems. He can swallow his pride and move on, but the loss of reputation will weaken his ability to manage rival factions of the Thai Army that believe they can govern better. Above all the concerns already mentioned, there is the issue of the turbulent King Maha Vajiralongkorn who has signalled early that he has no patience for sometime achievements and relentless inadequacy.

This feeds the key driver of Prayuth’s desperation: that he will not be able to maintain order after the new government is formed if his inescapable victory is narrow to be legitimate. A clearly rigged election would cause protests and civil unrest similar to what prompted his coup five years ago. Bangkok traffic, habitually static, was barricaded at main intersections as Red Shirt versus Yellow Shirt tensions rose on the streets. However, in truth, the threat of losing power does not come from the masses. It comes from the new King who demands that order be imposed on the wayward population, and who is not afraid to give his blessing for another coup that could bring silence. Prayuth’s real fear is that he cannot perform to the King’s liking. It is one thing to be voted out of power, it is another to have to slip across the Cambodian border and beg for Hun Sen’s hospitality.

Prayuth may be suffering from high anxiety, but this desperation makes him the most dangerous man in Thailand today. Because he cannot afford to fail, he will not permit any public criticism or activities that highlight his weaknesses for fear of being removed. Even now the government is targeting opposing politicians with suspect court cases, while high-profile activists are beaten in the streets by Prayuth loyalists. He is bent on fabricating some kind or order from the chaos around him. He will continue to plot and deal and cobble together enough parliamentarians to claim triumph. Sadly, he will not hear the new generation of activists who are calling his bluff; he has too much to lose.