Interview: Privatization of Warfare and Mercenaries 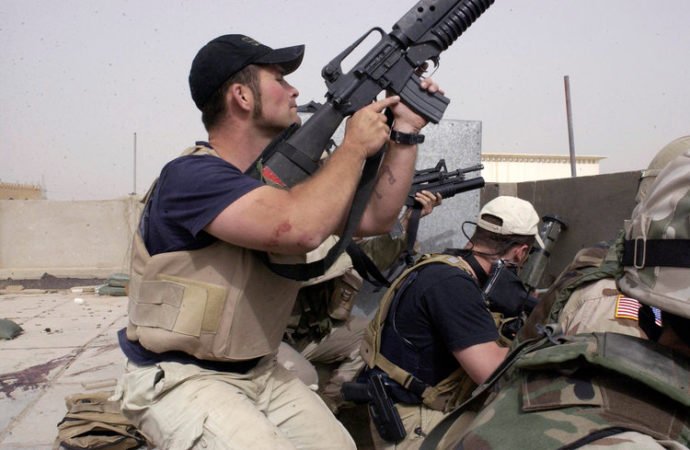 The involvement of Military Companies in warfare is not new. However, in recent armed their numbers have increased significantly and the nature of their activities has changed, leading some commentators to speak of a growing “privatization” of war.

Their activities include protecting military personnel and assets, training and advising armed forces, maintaining weapons systems, interrogating detainees and, on occasions, even fighting.

How big is this warfare-privatization industry, which are the major countries and at what extent they’re relying on their private counterparts?

Privatizing warfare and mercenaries can be regarded as old as war itself. However, it was after the cold war that states began to reduce military budgets and standing armies, leading to questions of cost-effectiveness and hence the notion of outsourcing warfare. Afghanistan and Iraq especially remain the most lucrative markets for private military companies (PMCs) since the Iraq Invasion of 2003. The sudden need for boots on the ground saw the birth of some PMCs almost literally overnight.

In some cases, such companies consisted of little more than retired (US) soldiers who kept military and related contacts in Iraq and saw a business opportunity in the so-called War on Terror. Due to the Abu Ghraib Prison Abuses and the Nisour Square Massacre linked to US military firm Blackwater, there is an extensive focus on the US as a major country that exports privatized warfare. However, other countries that have birthed PMCs include the UK, South Africa and more recently Russia’s Wagner Group and its involvement in Syria and Sudan.

The nexus between PMCs and states is complex; a state such as America acts as a country of origin for many firms that operate abroad (e.g. in Iraq) while the US government may also be a client of these very firms and deploy them in conflict zones worldwide. At the same time, the Arab Spring has seen some dictators rumoured to have hired individual mercenaries as opposed to whole companies to address unrest against their rule. Further, NGOs may also hire PMCs for much-needed security when venturing into war zones or occupied territories where no central government exists to guarantee security.

At what extent, privatization of the warfare, having an impact on war-fighting, especially on the ground?

Privatizing warfare has serious political and legal implications. It is worth mentioning that many PMCs do not directly participate in armed combat but are often deployed alongside government forces to oversee non-combat tasks such as logistics, weapons maintenance, catering, escorting high profile figures such as ambassadors and other related protective services. The main problem is when PMCs are involved in direct battle space as armed actors. While International Law should regulate armed conflict, the legal definition of a mercenary is an accumulative six-point definition. Because of the accumulative nature of such a definition, very few PMC employees would be found guilty of being a mercenary, even if they are deployed in a war zone and motivated by financial gain.

Note that PMCs are ultimately transnational private and for-profit companies. Hence, one can argue that they would not prioritize political considerations such as accountability abroad and thorough regulation. The consequence of the privatization we see in Iraq is the possible loss of political control over PMCs by states and the erosion of a state’s credibility in relation to its ability to monopolize force as a sovereign political actor. Further, it can be argued that the behaviour of PMCs acting abroad on behalf of a client state can erode that state’s foreign relations if scandals such as Nisour Square emerge involving such contractors.

America’s reputation in the Middle East has been severely damaged by its political activities in Iraq, with scandals such as the Nisour Square Massacre feeding into the resentment of US presence in the Middle East. Lastly, as warfare evolves from boots on the ground to drones in the air, there is the concern of drone technology being developed and weaponized by both government and private actors, with such drones then operated by a mix of government troops and private employees. Although contractors may be regulated and given limited, non-combat tasks (such as drone maintenance), any government reliance on commercially manufactured drone technology raises questions about the future of warfare and to what extent the state truly retains its monopoly over legitimate force.

“Business interests and politicking are convoluting modern warfare” How you see this statement? How much responsible are businesses in initiating warfare?

Another relevant question is, business going to war and have they always? Again, should for-profit enterprises contribute to and profit from combat and the violence that has traditionally been waged exclusively between states? During the period of colonialism, companies went to war against states and each other for profit. For example, the East India Company expanded rule, across India and boasted of its own private army. Once its size reached a certain level and it was a significant political player, the British Government absorbed the company rather than let it continue as a commercial enterprise that had started to act like an expansionist state. In a sense, this absorption acted as a balance of power to maintain the state as the legitimate authority in the use of force and imperialism.

However, in the contemporary we may argue we are seeing the reverse: states outsourcing inherently governmental tasks to private firms rather than limiting what such firms can do. This pattern grants non-state actors a dangerous status as for-profit institutes that can affect political decisions across the globe in a relationship where the state may become reliant on such ‘private intervention’ rather than PMCs being heavily regulated by governments.

How do you see the occasional use in media reports of the word “mercenary” in relation to employees of private military and security companies?

The term ‘mercenary’ is often used by media when discussing specific scandals and accusations of abuse involving PMCs. As previously addressed, for any individual employee of a PMC to meet the definition of mercenary is almost impossible due to the accumulative nature of this definition, provoking questions of whether International Law should be revised to take into account the power and influence of non-state actors in International Relations. At the same time, discourse from media can be sensational yet also capture the mood of public opinion.

In my book, The Privatization of Warfare I analyzed media discourse from the Nisour Square Massacre and the Abu Ghraib Scandal to understand how the term ‘mercenary’ was applied and to what extent the general public did not regard PMCs as legitimate methods of states outsourcing security. To my surprise, the term ‘mercenary’ was hardly used. Instead, many outlets referred to the companies involved in both scandals as ‘military contractors‘ and  ‘private security contractors‘, with such headlines vividly describing the brutal acts such companies were accused of participating in. Most PMCs want to be regarded as security firms and hence as protective rather than militant. Therefore, being referred to as ‘military contractors’ or a detailed description of the violence they have caused undermines this image and reveals that the general public does not regard them as legitimate sources of security.

However, once some of these firms had settled out of court, especially in the Abu Ghraib Scandal, media headlines referred to them as ‘defence contractors‘, playing into the protective image such PMCs desire. This shift in tone illustrated an arresting point: out of court settlements were headed by state authorities, emphasizing that the state could provide legal avenues of remediation and punishment for PMCs that had perpetrated violence. In other words, the general public can accept the existence of such contractors and their use by states if states demonstrate that they are in control of such a relationship and can ensure there is a system of accountability, even if some would argue that system could only provide financial rather than moral remediation.

Cyber warfare and drones are the future of conflict. Governments will be forced to match the efficiency of the private sector; however, the monopoly of the private sector on emerging cyber and drone technology means that states must be careful not to fall into the trap of relying on external actors for cyber defence and related defence technology, as companies will treat all states as they would any client. In my opinion, cyber warfare may become the next battleground by non-state actors seeking to attack states. Viruses and related programs that can disrupt state systems, be they security-related, for data collection or for the operation and maintenance of vital systems can be launched by individuals rather than standing armies.

Cyberspace has no defined territory and cyber terrorism allows for the freedom of anonymity, cost-effectiveness and for cyber terrorists to attack their home governments even if they are living in exile. In an earlier publication, I discussed how viruses have been used against oil states to disrupt software governing oil and gas production, with the risk of fatalities and plunging oil-dependent nations into chaos. As recently as August 2018, Saudi Arabia was hit with a virus intended to not only disrupt petrochemical operations but to trigger an explosion. Further, cyber terrorism and drone warfare may soon meet. Imagine if remotely operated drones were hacked and hijacked by non-state groups. For this reason, governments must keep up with any technology that can challenge the monopoly of force in any domain, including online.

Nicolai Due-Gundersen is a political commentator at Kingston University, London and author of 'The Privatization of Warfare' (Cambridge Intersentia). He has worked in Jordan and Turkey and now resides in London. He can be reached at [email protected]