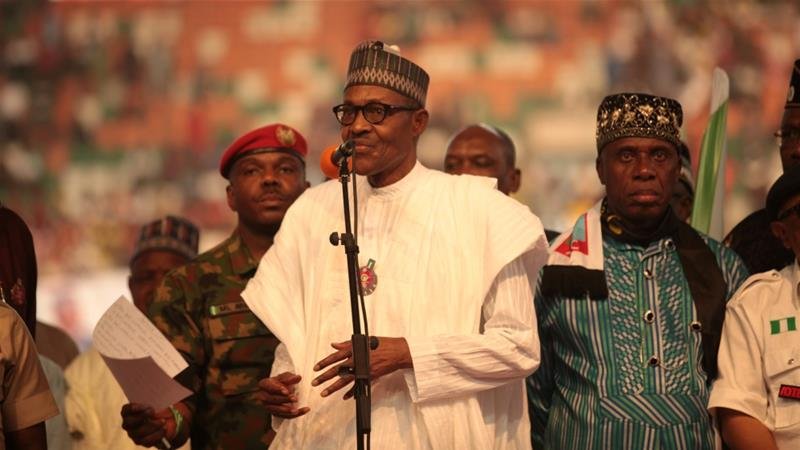 As for the longtime presidential aspirant Atiku Abubakar, one can take solace in the Bollywood film Gully Boy‘s famous number “Apna Time Aayega”(Our Time Will Come), but when is the open question. For the moment, President Buhari remains crowned but the challenges are many and Nigerians are hoping for a turnaround of the economy and opportunity.

Nigeria, the most populous state in Africa and a rich country with inherent developmental contradictions went to polls on February 23 to elect the President, Vice President and the National Assembly. The Independent National Election Commission (INEC) had postponed the elections by a week due to logistical and security issues which was criticized by the opposition parties as a ploy to help the ruling All Progressives Congress (APC) of President Muhammadu Buhari, a former General and also a President.

Contradictions in Nigerian polity and society like abject poverty and excessive riches, developed and under-developed education and illiteracy, health and incidence of diseases are galore. It is a powerhouse of human and natural resource base with abundant hydrocarbon reserves. The plight of the people and the country with immense potential has been accentuated by the indifferent polity and selfish commercial interests as is common in many developing countries. Nigerians had become infamous due to 419 scams preying upon the greed of the unsuspecting and gullible clients from across the world. One can’t really fault the Nigerians’ Con-innovation for writing beautifully crafted letters, proposals and emails but technically it falls well into the ambit of cyber crime.

Nigeria also has a well established norm and tradition that a President can run for a maximum of two terms, and usually as per convention there is a rotation among the Christian and Muslim politicians after two terms of four years since the population is evenly divided between the two religious communities. Like the one before President Buhari was Goodluck Jonathan, a Christian. Breaking of that understanding and protocol could result in communal disturbances which in reality has nothing to do with religious differences but the quest for power. Hence, it has been an unwritten law since 1979. The current President was into his first term, hence the other main opposition party, the People’s Democratic Party (PDP) had fielded the former Vice President Atiku Abubakar as its Presidential candidate .

President Buhari was declared a winner by a good margin regaining his Presidency over his nearest rival Atiku Abubakar. During the course of violent elections, Buhari had beseeched the voters to favour him so that he could tackle corruption, handle security effectively and revive the economy in recession. Buhari has broadly enjoyed a clean reputation in this oil rich country where corruption was not a political anathema. Atiku has been in politics for long and was Vice President of former President Obasanjo. He fell from favour of his boss when the latter tried to look for a third term decimating his chances to move to Aso Rock, the Presidential Villa. But he was back in the reckoning. There are no permanent enemies or friends in politics. This time round Atiku the billionaire and his PDP were quite hopeful given the ground situation in the country and the failing health of Buhari. However, the results were not to their expectations and they obviously called the rigged. It also claimed the victory and wrote to the INEC Chairman and international interlocutors accordingly. While Atiku is looking to resort to legal recourse calling it a “sham election” which he lost by almost four million votes, the international community seems to have expected and endorsed the victory of President Buhari.

The British were quick to congratulate Buhari while admitting the lapses in electoral process including logistics and results collation as well as violence and intimidation. UK’s statement, quoted the Minister of State for Africa Harriet Baldwin, “I offer my congratulations to President Buhari on securing a second term as the Nigerian President. UK is a long-standing friend and partner of Nigeria and the Nigerian people and a stable and prosperous Nigeria benefits Africa and the world”. They also certified that the results declared by INEC were commensurate and consistent with the parallel tabulation undertaken by the civil society groups. They also urged the people of Nigeria to have confidence in the results.

People’s apathy for the democratic and electoral process and elections was quite evident as probably they felt nothing much is going to happen or the political class has failed them. The elections that were hailed to be the biggest ever landed up having the lowest polling and votes cast. Only a third of the 73 million voters exercised their franchise which was the lowest in 20 years -indeed a worrying sign. This trend has been continuing from 2003 especially in the oil rich southern states. It could possibly be due to security concerns and the threats of Boko Haram and its allied group Islamic State of West Africa Province. The count could also be less due to introduction of electronic machines that reduce the error and manipulation. In 2006 an Indian company ECIL had given demonstration of Electronic Voting machines (EVMs) to the INEC and other relevant ministries and organizations. Ironically, they were not far too upbeat as they felt that the machines could be stolen or manipulated and both the voters and authorities would not have enough confidence in them to begin with. Nigerian people have travelled far since then.

Like any other political system, in every democracy there are shortcoming. Nigeria after independence had its own trials and tribulations with occasional coup d’états by military officers and Junta. Interestingly, democracy found its roots with the efforts of a former President, Olusegun Obasanjo who in the initial years eschewed the temptation for the continuing army rule. Obasanjo was also trained in Indian military establishments and held India in high esteem like several others including President Buhari who did his Defence Services Staff College in India. It is indeed good for continuity and emphasis on the bilateral relationship for which no doubt the two sides are closely engaged.

As for the long time presidential aspirant Atiku Abubakar, one can take solace in the Bollywood film Gully Boy‘s famous number “Apna Time Aayega”, but when is the open question. For the moment, President Buhari remains crowned but the challenges are many and Nigerians are hoping for a turnaround of the economy and opportunity.