Polish PM cancelled his visit to Israel- Here’s why? 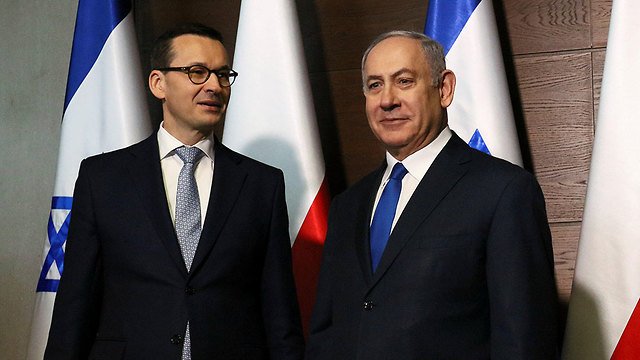 Polish Prime Minister Mateusz Morawiecki cancelled his trip to Israel due to Israeli Prime Minister’s comments in Israeli media about Polish co-operation with the Germans during the Holocaust.

According to Polish media, Prime Minister Benjamin Netanyahu in his comments intended to accuse the Polish nation of complicity in the Nazi Holocaust. Later, Bibi in an attempt to defend himself said he was not referring it to the Polish people.


However, PM Morawiecki made it clear that he was not going to attend the summit on Tuesday. The meeting in Jerusalem was subject to represent the Czech Republic, Poland, Hungary and Slovakia.

Polish government’s spokesperson Joanna Kopcinska in a statement, said “Polish Prime Minister conveyed Netanyahu that Poles are going to be represented at the summit by the secretary of state Jacek Czaputowicz.

Prime Minister Netanyahu was on a visit to Poland when his comments were reported in Israeli media. But later his office had clarified that his comments were for the Poles and not for the Polish people in general or for the country. He further made it clear in his Twitter post that there was “no Polish regime” during the Nazi occupation of Poland. Many of the diplomats said that if Netanyahu had spoken this about Israel then Israel would not be a good place to meet.

Earlier, Poland summoned Israeli ambassador on Friday (Feb 15) in warsaw and threatened to cancel the summit in Jerusalem after reported comments.

Prime Minister Morawiecki announced his trip to be cancelled finally on Tuesday.

Israel offered to host the meeting of the Visegrad just to strengthen ties with the European Union.

During World War II, Poland suffered a huge brutal occupation by the Nazi and Soviet Regimes and more than half of the Polish people died during the annexation. The previous year, Poland introduced a controversial law which made it illegal to accuse the Polish government or the state of collusion in the Nazi Holocaust. After pressure from the US government and an outcry in Israel, Poland agreed to change the law and it now no longer exists carrying three years of imprisonment in jail.

Netanyahu’s office had made it clear that his comment was taken in a wrong way by the Jerusalem Post which issued a corrected story. Katz told Israel’s Reshet thirteen TV, “In diplomacy, one always tries to avoid causing offence. But nobody can amend historical truth, Poles collaborated with the Nazis, certainly.” Further, Israeli Ambassador Anna Azari was asked for the clarification of Netanyahu’s comments.

However, several Poles still refuse to simply accept analysis showing thousands taking part within the Holocaust in reference to thousands UN agency additionally risked their lives to assist the Jews.

However, Netanyahu was initially quoted by Israeli media outlets saying not “Poles” but “The Poles” cooperated which in some way blamed the whole Polish nation.

Priya Sarma is a Former Research Intern at The Kootneeti (Feb 2019 - March 2019). She can be reached at [email protected]