“Peru is one of the most vulnerable countries,” Peruvian President Martin Vizcarra Cornejo said. “Our great biodiversity is the principal natural capital on which we rely and thus climate change and extreme climatic events like droughts and deluges put us in a particularly vulnerable position.”

Mexican President Enrique Pena Nieto highlighted the importance of implementing the UN’s Paris climate accord, which seeks to avoid the most catastrophic effects of climate change by keeping global warming well below 2 degrees Celsius above industrial levels by the end of the century.

President Hilda Heine of the Marshall Islands, a low-lying Pacific atoll nation little more than one metre above sea level, which is threatened with annihilation by rising oceans, called for urgent implementation of the Paris accord. 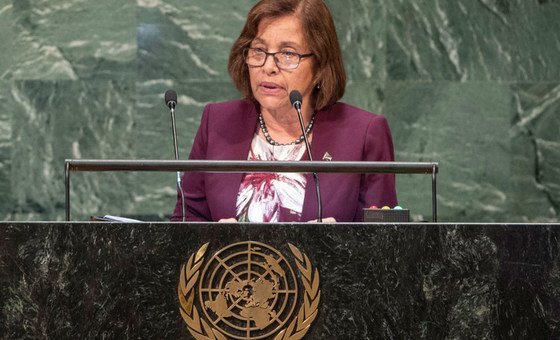 President Hilda Heine of the Republic of the Marshall Islands addresses the seventy-third session of the United Nations General Assembly. UN Photo/Cia Pak

“The future of the Marshall Islands hangs in the balance,” she warned. “But it is not just us, even if, as an atoll nation, we are the most vulnerable. We are joined not only by other small island developing States, but many other countries who face serious challenges posed by climate impacts.”

Speaking from the opposite spectrum of low-lying island States, President Sooronbay Jeenbekov of the high mountain Central Asian nation of Kyrgyzstan, warned that climate change is having an increasing impact on the glaciers and water resources in his country, contributing to the growth of natural disasters.

Many leaders recounted the problems and achievements of their own countries. But they also highlighted the UN Sustainable Development Goals (SDGs), which seek to eliminate a host of social ills in an environmentally friendly way by 2030,  and underscored the UN’s prime role in attaining the global partnership needed to combat climate change and resolve a slew of other problems, including the current worldwide migration crisis.

A discordant note came from United States President Donald Trump, who rejected the ideology of globalism, opposed the new Global Compact on Migration, scheduled to be adopted in Morocco in December, and complained that the US’s trading partners had taken advantage of it, explaining his policy of unilaterally imposing billions of dollars in import tariffs.

Delivering a sound argument against this position was Swiss President Alain Berset, who bemoaned the “tendency at the moment” to seek answers to such problems as globalization, inequality, conflict, extremism, migration and climate change “in nationalist isolation and in a growing mistrust with regard to cooperation between States.”

“We are witnessing a real crisis in multilateralism – paradoxically at the very moment when we are trying to forge the main pillars of the global governance of the future,” he said. “The United Nations is indispensable and ideally placed to tackle contemporary challenges, especially the fight against inequality.”

He also decried “policies relying on trade protectionism and selfish interests” that undermine trade and prosperity, and reiterated his countries support for the [International Criminal Court] as “this unique international cooperative effort in favour of the victims of the most serious crimes.”

The defense of multilateralism must begin here … The UN and its members need to show their will to act together, not past each other – Finnish President Sauli Niinistö

Brazil’s President Michel Temer also made the case against protectionism. “Protectionism may even sound seductive, but it is through openness and integration that harmony, growth and progress can be achieved,” he said. He also underlined the importance of adopting the he Global Compact for Migration.

Finnish President Sauli Niinistö also championed multilateralism. “Unfortunately, there is now reason to be worried for all of us who believe in the benefits of multilateralism,” he said. “The international system we have built together is visibly under pressure. Its capability and credibility are questioned. We can no longer take the rules-based order for granted. It is our common responsibility to actively defend and develop it.”

He called the UN “the core” of the multilateral system. “Therefore, the defense of multilateralism must begin here,” he said. “The UN and its members need to show their will to act together, not past each other.” 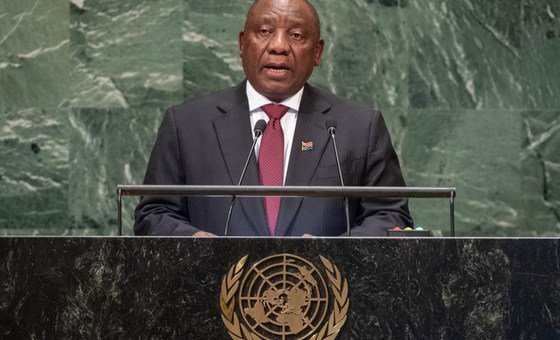 South African President Cyril Ramaphosa also robustly defended multilateralism. “We must resist any and all efforts to undermine the multilateral approach to international trade, which is essential to the promotion of stability and predictability in the global economy,” he declared.

Many speakers declared their support for the Global Compact on Migration. “We look forward to its adoption in Marrakech later this year,” Nigeria’s President Muhammadu Buhari said, noting that irregular migration is not a consequence of conflicts alone, but of the effects of climate change and lack of opportunities at home, calling climate change “one of the greatest challenges of our time.”

“The current two-track system of global governance is unsustainable,” he said. “A few get to be the ones to define the norms by which others shall be judged. But standards that do not apply to everyone equally are not universal. Addressing this imbalance in the very foundation of our system is what will give shape to a revival of multilateral cooperation, and renew the legitimacy of the international institutions, that are so crucial to our planet’s future.”

Ecuador’s President Lenin Moreno Garces gave a personal dimension to the value of UN compacts, treaties and conventions, sharing his personal story of suffering an assault 20 years ago that cost him the mobility of his legs. “I see the world from the height of the heart,” he said, referring to his stature in a wheelchair.

“This is not just my story, but that of one billion people in the world,” he added, calling the UN Convention on the Rights of Persons with Disabilities, and its optional protocol, “the best guarantee that, together, we will develop a commitment.”

But it was Malawi’s President Arthur Peter Mutharika who perhaps best captured the true essence of the UN. “Every nation is important and we all have something to offer,” he declared. “There are no minorities here. There are no small nations here. There are only nations in the United Nations.”