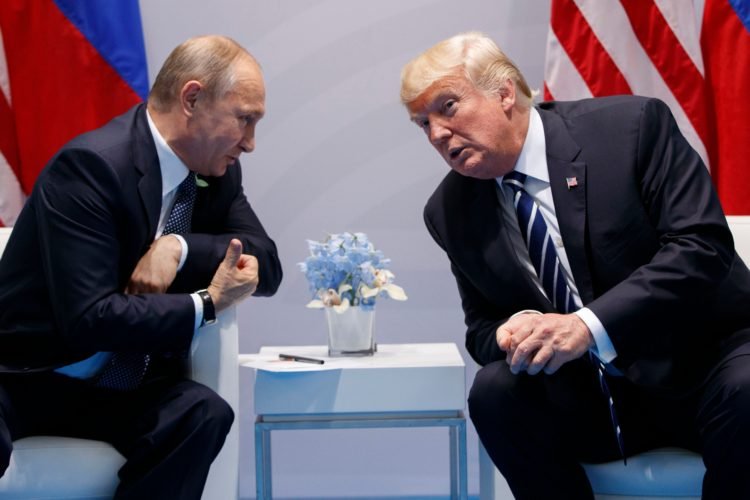 It is a known fact that Trump and Putin, two strong men, have a certain liking for one another. But while Putin is a strategist who brought about the resurgence of the Russian pride and regained lost global influence, Trump, in his quest for “America First”, has left a trail of discomfort and discontent in his most recent forays and interactions with, besides his adversaries, even the long-time partners and allies – Ambassador Anil Trigunayat*

Ensuring Peace is a global good and a responsibility of all countries and stakeholders. But it is more so of the Hyper and Superpowers, who always indulge in the political chess games and move their rooks adroitly and sometimes bluntly, to ensure their fiefdoms, areas of influence and critical strategic interests through alliances, diplomacy and military and economic power. In the past decades, the global hot spots have proliferated along with increasing mistrust among the major international players. A major fallout of narrow national interests blunting efforts is the reverberation of extremism and terrorism, which ideally should have seen a unified international response, but have not been met with the requisite force. In a free for all, competition theatres have become breeding grounds of more extremism and rabid terrorism like Daesh (ISIS). War and destruction continue apace.

It is in this context that the July 16 Helsinki meeting between President Trump and President Putin, despite the divided public opinion in the US and its allies, acquires much greater importance. They have a lot on their table including the deteriorating bilateral relations, the situation in Syria, Iran, Afghanistan, China, Korean Peninsula, Iran and West Asia, nuclear non-proliferation, cyber security and space cooperation. Moreover, the worsening Sino-US Trade war and the increasing imposition of tariff regimes and sanctions have added a far more difficult complexity to this matrix.

When President Trump was elected, he was keen to meet Putin and had aspired to work more closely with Russia – an ideal situation. But the domestic debates and investigations on Russian interference in the elections in favour of Trump and Russian adventure in Ukraine and annexation of Crimea gave enough firepower to the deep state in the US to blunt any semblance of normalisation. Instead, the vitriolic became sharper. Although Trump and Putin have met at G-20 and Vietnam, when Trump is said to have raised the issue of the Russian interference and expressed his satisfaction at the Russian response that they had not indulged in undermining the US electoral process, but the issue does not go away and will again come up at Helsinki, even if for the sake of semantics. Trump has claimed that it would be easier for him to deal with Russia, and Putin and he seems ready to do business with them. This time, Trump and Putin have agreed to meet without aides and can have the free and frank exchange of views on the whole gamut of their concerns and could perhaps bridge some gaps.

It is a known fact that Trump and Putin, two strong men, have a certain liking for one another. But while Putin is a strategist who brought about the resurgence of the Russian pride and regained lost global influence, Trump, in his quest for “America First”, has left a trail of discomfort and discontent in his most recent forays and interactions with, besides his adversaries, even the long-time partners and allies. This is particularly true of the G-7 Summit in Canada and NATO Summit in Brussels, as well as his famous visit to Riyadh last year. What added fuel to fire in the Middle East was his withdrawal from the Joint Comprehensive Plan of Action (JCPOA) with Iran and shifting of US Embassy to Jerusalem. All this combined with the fuelling trade war with China, EU, North America Free Trade Agreement (NAFTA) neighbours, India etc., US withdrawal from UN organisations, Climate Change Agreement and the Trans-Pacific Partnership deal, and the threat to decimate World Trade Organisation (WTO) have tended to undermine the globalisation, free trade and international institutional arrangements . But given his flamboyant style, Trump was able to break the ice with the North Koreans that, if successful, might be a big positive in his slate of achievements. With the Russians, Trump may adhere to the dictum “mutual respect with mutual interest”.

On the other hand, Putin, the master strategist, has been riding high on his continued domestic popularity and enhanced international influence, including in Syria and the Middle East. Russia’s friends look up to them and Putin tries to stand by them. In the wake of the Helsinki Summit, Iranian Supremo sent his special emissary in Ali Akbar Velyati, an old Russia hand, to brief Putin of their concerns. Putin has committed to standby the JCPOA. Surely Trump would hope to persuade Putin to rein-in Iran both in the context of the nuclear deal and application of sanctions, and its involvement in Syria. After the fall of Al Darra, seven years later the Syrian armed opposition and revolution has grounded to a halt, and President Assad is firmly entrenched with Russian blessings and Iranian support.

In the wake of developments in Syria and need for de-confliction and de-escalation, King Abdullah II of Jordan has started hectic diplomatic manoeuvres so that the adverse impact of Syrian situation could be stunted. He has excellent personal relations both with Trump and Putin and has often acted as a trusted interlocutor between Russia and the US. Similarly, the Saudis, Emiratis and Israelis have been conducting parleys with senior officials on both sides so that a “Grand Bargain” to wean away Russians from Iranians could be achieved. While it may be too early for Russia to find relief from sanctions, the Gulf countries have been willing to invest billions there. Whether Putin will strike some bargain in this regard and would sacrifice his considerable edge, remains to be seen. In the meantime, conducting his sports diplomacy, he extended invites to the leaders from Palestine and Israel to witness the finals of World Cup Soccer which was so meticulously organised.

As for us, India definitely stands to gain by this Summit through the easing of tensions between our two major strategic partners, especially in the defence and energy sectors. We are a considerable market for both in these areas. Several deals are in the pipeline which could be allowed to fructify. The controversy generated and implicit restraint imposed upon the Triumf vs THAAD weapon systems and energy supplies have created a major problem for India. Hopefully, India could avoid direct confrontation with either if the two world leaders agree on ceding or sharing the space of their core interests rather than playing a zero-sum game. India has extended an invite to President Trump to be the Chief Guest at the next Republic Day which is a distinct honour, especially as last President Obama enjoyed Indian hospitality just four years ago.

The stage for a favourable or at least a neutral outcome of the Summit has already been laid with Trump urging the G-7 to invite Russia back to be a part of the Group despite the Novichok-Skirpal British controversy, consequent expulsion of Russian diplomats and the ongoing sanctions. Moreover, President Trump’s somewhat unifocal approach even towards its transatlantic partners conveys the impression that the Western alliance may not be directed against Russia, and that may be music to Putin’s ears. On the question of Crimea, Trump passes it off as an Obama legacy issue and hopes to convince the Russians to go slow on Ukraine.

Indeed, certain mutual give and take and strategic accommodation of mutual interests could pave the way for a good beginning. As in the UK at the joint press conference with Theresa May, President Trump said he would love to have good relations with Russia but it may be a “long process”. Trump is taking a domestic risk by meeting Putin. Putin, therefore, might consider favouring Trump with some flexibility by agreeing to limit nuclear proliferation and weapons, and so make the Summit a success. Whatever be the outcome then, a good beginning would have been made. Putin-Trump Summit, even if moderately succulent, will bring down the global temperature and will be beneficial for India. But what will it take to make it successful, that is the question not easy to answer.