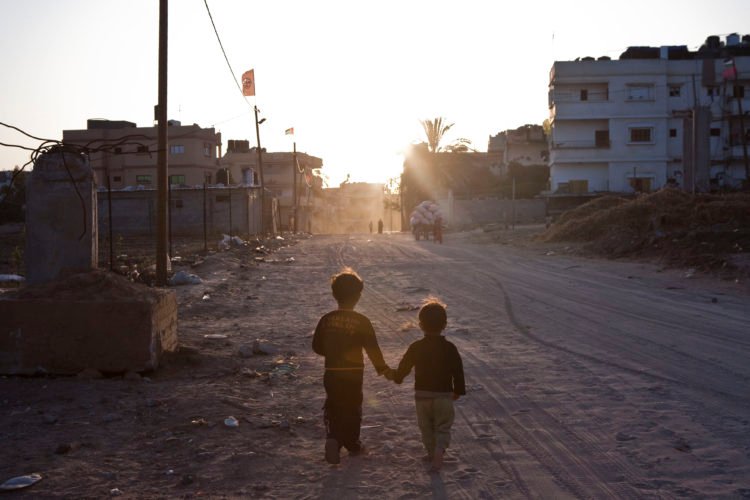 Jabalia, Gaza, an area close to the Israeli/Palestinian border that was hit hard by the 2008/2009 war in Gaza also known as "Operation Cast Lead."..Credit: Katie Orlinsky/Caritas 2010
PDF Button

Jabalia, Gaza, an area close to the Israeli/Palestinian border that was hit hard by the war in Gaza also known as “Operation Cast Lead.”..Credit: Katie Orlinsky/Caritas

100 years of Balfour declaration and Sykes-Picot agreement continues to haunt the generations and the legacy of imperialism. ‘Divide, and let them rule or not’ remained the dictum in this almost intractable Middle Eastern conflict which remains the core issue if any peace or stability is to be expected in the region- Ambassador Anil Trigunayat*

Middle East Peace Process has been dormant and lying in a limbo for quite some time as a result of sporadic and non-sincere efforts, or for that matter, simple lip service. Last US initiative on reviving the peace process was stalled in 2014. The Palestinians continue to suffer and the Israelis remain ever so cautious and concerned of their security- a no winner paradox indeed. The situation has lasted for over seven decades with several wars and umpteen number of violent incidents leading to the death of innocents. No one counts the dead these days since polarisation has become so rabid.

100 years of Balfour declaration and Sykes-Picot agreement continues to haunt the generations and the legacy of imperialism. ‘Divide, and let them rule or not’ remained the dictum in this almost intractable Middle Eastern conflict which remains the core issue if any peace or stability is to be expected in the region. Camp David, Oslo Accords, UN Security Council Resolutions and the Quartet efforts, as well as the Arab Peace Plan, have had only incremental results. But Intifada, Gaza conflicts and the hardships to the Palestinians, and indulgent insecurity among the Israelis are there in a day-to-day discourse which has further worsened with increasing mistrust and disappointments with one another. For the objective observer, it is an untenable situation. Neither the brutal force of one side nor the extremist incidents perpetrated by the other can yield an acceptable outcome. Vitriolic and venom would only define the course of further destruction. Can the international community just watch the horrors with helplessness or it is just a matter of convenience? Moreover, recent developments in the region have cast a darker shadow on the prospects for a settlement or enduring peace.

USA has been the certain arbiter of security in the region given its special relationships with Israel and the Arab especially GCC countries. Several Administrations have one time or the other tried to reach a partial solution. Unfortunately more often than not these efforts have led to the more unstable environment due to local and domestic compulsions. Countries in the region trusted on the good faith of the USA despite its perceived preference for the Jewish state. However, on entering the White House, President Trump gallantly announced that he will resolve the Palestinian issue once for all through his “Deal of the Century”. But, his very first visit to the region inadvertently led to the splintering of the Gulf Cooperation Council (GCC) with the expanding Qatar-Saudi-UAE spat and cancellation of the nuclear deal with Iran, thus ceding greater role for Turkey in the GCC which is also emerging as a major contender for the Palestinian cause. The equations are changing with the Shia-Sunni divide accentuating further and major Sunni states like Saudi Arabia and UAE hoping to close the loop with Israel pursuant to the US initiatives which many observers consider naïve and disruptionist, to say the least. Hence ‘my enemy’s enemy is my friend’ appears to rule the roost.

In December, President Trump almost quashed the chances of any resumption of Middle East Peace Process when he declared that the US will shift its embassy to Jerusalem, which they did a couple of months later, leading to widespread protests and shuttle diplomacy among the Arab countries. President Erdogan of Turkey took a lead calling the Organisation of Islamic Countries (OIC) meet and reiterating the essential ingredient that “East Jerusalem will be the capital of Palestine as agreed and reiterated in several resolutions”. Arab League followed suit and other Arab and Iranian leaders decried the US move. Even the UN General Assembly castigated the move.

King Abdullah II of Jordan has been the strongest bulwark for the Palestinian cause who always maintained and reiterated his stance that, “A just and lasting solution to the Palestinian issue will bring peace and security to the Middle East region. That inter alia means a two-state solution in accordance with international law and the relevant UN Security Council resolutions on establishing an independent State of Palestine with East Jerusalem as its capital and living side by side with Israel in peace and security”. Jordan is also the only country other than Egypt that has a Peace Treaty with Israel and feels a direct impact from related developments since almost 60 percent of its population is of Palestinian origin. But it also depends on the bounty of its Gulf brothers and that of the US, who ipso facto wield disproportionate influence over it. Jerusalem is a more sensitive issue for King Abdullah who is the ‘custodian’ of the third holiest Al Aqsa Mosque there, apart from the Christian religious sites. He, therefore, protested against the US move which would de facto and eventually de jure will take Jerusalem off the table in any future negotiations. But without Jordan being on board, things might just go south; he was invited to visit Washington after conferring with Kushner, and President Trump was all charm this time.

June has witnessed some significant activities with regard to the Peace Process and the Trump Plan as soon as he had dealt with his North Korean nemesis. President’s son-in-law Jared Kushner and his Middle East Envoy Jason Greenblatt were dispatched to the region to confer with the key stakeholders. They visited Saudi Arabia, Egypt, Qatar, Israel and Jordan before the ‘grand strategy and plan’ could be made public. To assuage the Jordanians, King Abdullah was invited to Washington DC and to discuss the bilateral assistance and the regional issues – most importantly the Palestinian proposal. There is a missing link in the puzzle – the current Palestinian leadership in President Abbas do not consider “US as a trusted and honest broker” any more. In the wake of US decision on Jerusalem, they have been refusing to meet the US leaders and delegations, starting with Vice President Pence. But Palestine, as it stands today, is a divided house with Hamas and Abbas becoming the two sides of the coin and so giving others a leverage. Moreover, with mixed signals emanating from their capitals the traditional gung-ho support from the major Arab countries has turned lukewarm. The remaining lip sympathy, due to their priority in dealing with Iran at any cost, is music to the Israelis and Americans alike.

Since no one had the exact idea of the “Plan or the Vision” rumours like alternative Palestinian capital in Abu Dis or a US intent to change the recalcitrant Palestinian leadership, especially the eight-year-old Abbas, were afloat. Abbas’ spokesmen and negotiators junked the Kushner-Greenblatt tourney calling it “doomed to fail”. It is no wonder that in an interview to the Palestinian Al Quds newspaper, Jared Kushner stated “President Abbas says that he is committed to peace and I have no reason not to believe him. More importantly, President Trump committed to him early on that he would work to make a fair deal for the Palestinian people. However, I do question how much President Abbas has the ability to, or is willing to, lean into finishing a deal. He has his talking points which have not changed in the last 25 years. There has been no peace deal achieved in that time. To make a deal both sides will have to take a leap and meet somewhere between their stated positions. I am not sure President Abbas has the ability to do that.” Although the blueprint of the Trump Plan is not yet clear, it does have Marshal Plan like ingredients for investments and developments in the region, especially in Palestinian as it will look like. Kushner tried to appeal to the Palestinians directly as the donor fatigue sets in. But the leaked details do not augur well. Meanwhile, Prince William became the first British Royal to visit Palestine last week and conferred with President Abbas as well as Prime Minister Netanyahu. Although it was not said to be a political visit it did provide a feedback from the Palestinian leadership which surely would be plugged into the game plan. In any case, the humanitarian situation in Gaza was discussed with concern by all parties. The most disconcerting question dogging every one’s mind is as to how will the US Plan be successful when Palestinians are not part of it.

India has consistently supported and provided assistance to Palestinian people and was always seen as a major supporter of the cause. Prime Minister Modi’s separate and highly successful visits to Israel and Palestine and the immense bonhomie he has developed with other leaders in the Middle East have raised hopes that India could emerge as a reliable and honest partner which could help find a thaw in the Peace process if the current efforts by the Trump Administration do not succeed. With enhanced regional and global role, expectations from a resurgent India are bound to be there. Already Palestinian and regional leaders expect an enhanced role for India in regional affairs. But one has to remember and be cautious that Palestine is an emotional issue and the region is a minefield of sensitivities, historic wrongs and sharp differences, and above all the prevailing distrust which is difficult to bridge. Meanwhile let’s wait for Trump’s “Deal of Century”, as to and what it entails.