Is realism as a theory in international relations still relevant today? 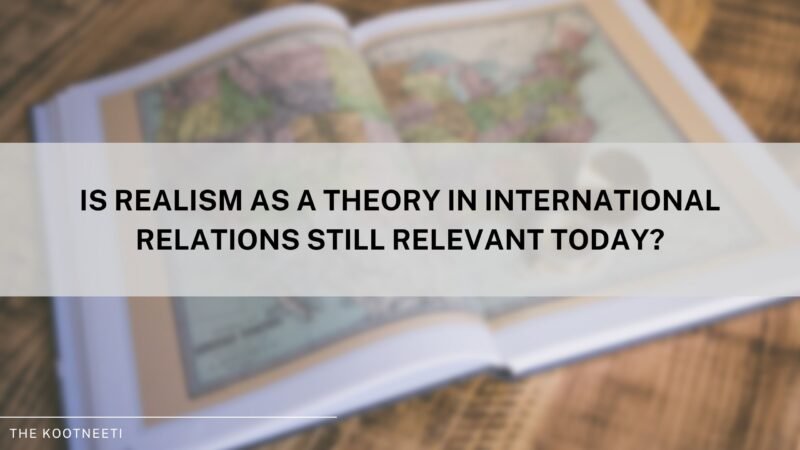 Understanding the academic of international relations has been the sole domain of western scholars and their ideas. The discipline of international relations has traditionally followed established principles like realism and constructivism by Kenneth Waltz and Alexander Wendt. The Scholarship regarding the work on realism has been present since the field of International Relations began. Realism as thought has been present since the times of theorists such as Thucydides, Hobbes, and Machiavelli.

Realist thought is nothing but a school of thought of international relations that tries to find the solution to world order; it emphasizes the national interest and concern about the world anarchy system and always tries to create pessimistic images of the international system. It puts survival instincts among the states as the main interest. It resembles Charle’s Darwin conception of ‘Survival of the fittest as a way to survive in the anarchic world order.

Around 1920 the scholars of Idealism created an optimistic image of international relations; gradually, the world faced several failures like economic depression, the collapse of the league of nations, and World War II. These several failures of the international system turn its image into a pessimistic view. Then the international scholars came up with a new approach: realism. It looks at the world as what it is and the reality of the global system. Realism may classify into two types classical realism and structural realism. Again, structural realism may classify into three types neo classical realism, defensive realism, and offensive realism. The crucial scholar of realist thought, Morgenthau, criticized liberals as romantic as he traced that the international system is more conflict than cooperation between the countries.

Realists believe that conflict will always be a part of world events and international relations; as governments pursue their national interests, they will unavoidably come into conflict with one another. this conflict will occasionally be played out in military terms, which raises the prospect of war. There is two ways realist account for violent power politics. First, classical realists strongly emphasize state egoism, contending that political rivalry between and within communities reflects innate human inclinations towards self-seeking, competitiveness, and hostility. Even when logically overwhelming, realism lacks the springs of action required to pursue the thought. Realism often proves to be just as conditioned in practice as any other mode of cognition if we attack it with its tools. In contemporary times, the realist school of thought comes into the limelight with the Russian invasion of Ukraine. Offensive realists like John Mearsheimer blamed the west and its military arm NATO for the Russian actions. He blamed the US and its European allies for provoking the kremlin by expanding the membership of NATO by incorporating members like Ukraine and Finland. He sympathizes with Russia’s action to defend its national interest and sovereignty. Though nowadays the UN is exiting lots of transnational, transgovernmental organizations, no one can stop Russia from war conflict. And also, there is another incident occurring, the Nagorno-Karabakh conflict between Armenia and Azerbaijan. It is a border dispute over the military standoff between both countries. Each side blamed the other for changing the status quo established after the USSR’s dissolution.

The limitations of realist thought are that they talk about the state actors and try to solve the problems of the international system. But now, several non-state actors are rising in the international arena. Realists cannot give the solution to the war between non-state acts likewise – such as terrorism, civil war, the issues linkages, and technology warfare. Terrorism is the biggest threat worldwide; no country is free from it, but there is no solution from realists to address it. The human catastrophe in Syria is an example of actors from different factions fighting in the impoverished region to promote their sectarian interests.

Similarly, the Climate change crisis is shaping the world more than ever. The danger to the countries near the sea is experiencing vast climate-related refugees. This outward movement of people from the climate-ridden areas can bring instability to the recipient countries.

There is no denying the fact that realist thinking has done great scholarly work in the field of international relations. It was the first to understand the world through the lens of power politics in the present decade. But as the system as fundamental changes, so should its attributes change too, or else there is a huge possibility that the thought will become redundant.   But the recent crisis has shown that it is too early to write the obituary of realist thought.