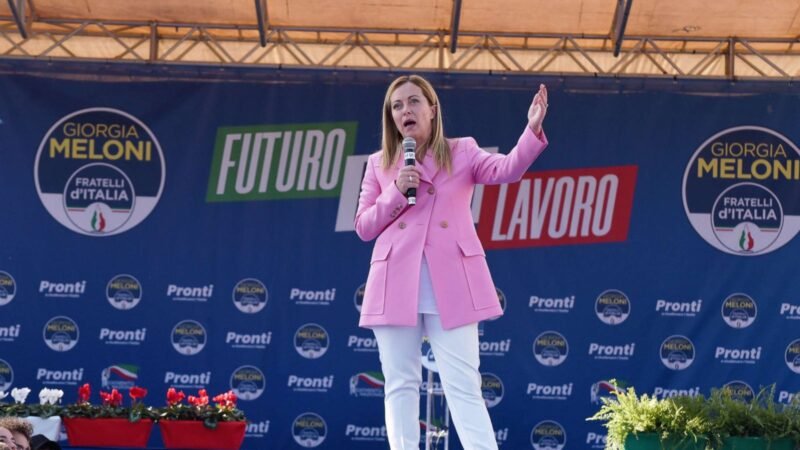 Italy has seen a change of government about sixty-nine times since the end of the Second World War. This constant political instability has resulted in the voters seeking a definitive change in power. As Italy once again gears up for elections, Giorgia Meloni’s Brothers of Italy party is leading the pre-election polls by almost 25%, according to Politico. Is the right-wing populist party the answer that Italians are looking for?

Brothers of Italy is the successor of the neo-fascist Social Movement. Although Meloni has been categorical in distancing herself from fascism, she has stuck to using the slogan ‘Dio, Patria, Famiglia’ (God, Homeland, Family), closely associated with the fascist era. The party also continues to use several symbols of fascism including the fire logo in the colours of red, white and green, simultaneously the colours of the country’s national flag. Additionally, supporters of the party have been spotted using the fascist salute during public events. Such behaviour has resulted in other countries sitting up and taking notice of the political developments taking place in Italy.

Where did Meloni start her journey?

Giorgia Meloni was born in the city of Rome in 1977. She was raised by a single mother in Garbatella, an urban area of Rome. She claims to have graduated high school with a diploma in foreign languages however inconsistencies have been found in her story. In her youth, she has worked in various roles such as a nanny, a waitress and a bartender.

Meloni’s involvement with politics started when she was just 15 years old. She joined the Youth Front, the youth wing of the patriotic Italian Social Movement (MSI) in 1992.  Later, she became the central leader of the student movement of the National Alliance, a successor of MSI. Since then her political journey has been on an upswing.

Meloni was elected as the youngest ever Vice-President of the Chamber of Deputies in the 2006 General Elections. She was appointed as the Minister of Youth in 2008 in the fourth government formed by media mogul, Silvio Berlusconi. In the past, her controversial stances on Chinese policy towards Tibet and against Euthanasia resulted in Berlusconi distancing himself from her.

After a series of unsuccessful attempts at political alliances, she finally helped find the conservative Brothers of Italy Party (or Fratelli d’Italia, FdI in short)  in December 2012 along with other right-wingers Ignazio La Russa and Guido Crosetto. The party fought the February 2013 general elections as part of Berlusconi’s centre-right coalition and received 2% of the total votes culminating in 9 seats in the Chamber of Deputies, the lower house of Parliament in Italy. Meloni was appointed as the leader of the party in the house but quit in 2014 to dedicate all her time to the expansion of the party. She was subsequently elected as the President, a position that she holds to this day.

The 2018 general elections saw a steep jump in the number of seats won by Fdl. It became the 5th largest party in both the houses of parliament. On 21st July 2022, Prime Minister Mario Draghi resigned following disagreements with Giuseppe Conte, a former prime minister and incumbent leader of the Five Star Movement (M5S) over a stimulus package presented in parliament to help fight the ongoing energy and economic crisis. The snap elections were conducted on 25th September. There is a strong belief that Fdl will emerge as the winner and go on to form the government with Giorgia Meloni being elected as the first woman Prime Minister of the country. If Meloni’s centre-right coalition wins the absolute majority, it is going to be the most right-wing government in the history of the Italian republic.

Meloni has never shied away from expressing contentious opinions. In a resurfaced interview from 1996, she is seen showing appreciation for Benito Mussolini. She lavished praises on him such as calling him “a good politician, the best in the last 50 years”. More recently, in January 2016, she participated in a Family Day rally where she made it known that she was not in favour of LGBTQ+ persons adopting children.While interacting with a young activist this year, she clarified that while she believes a child has the right to be raised by a mother and a father, she was not against the civil union of queer people according to Italian law.

Her anti-immigrant and anti- EU policies have also been made public on several occasions. She has been called Xenophobic and an Islamophobe. Last year, Meloni expressed her support for the conspiracy theory of Great Replacement, popularised by Frenchman Renaud Camus. It argues that caucasian Europeans were being replaced by non-Caucasians which would eventually lead to their extinction. The theory has no historical or scientific basis.

As of the morning of 26th September 2022, Reuters reported that more than half the votes have been counted and Meloni’s party is in the lead. It is most likely that FDL would be in the majority in both the houses of parliament in Italy. In a speech on the day of voting, she said that “If we are called on to govern this nation we will do it for all the Italians, with the aim of uniting the people and focusing on what unites us rather than what divides us. This is a time for being responsible.”

Observers all over the world wait with bated breath to see how Meloni will lead the country, already fractured with the many shuffles in government. Some issues that need her immediate attention are the fledgling Italian economy, the war in Ukraine (Italy has been supplying arms to the country) and the role of the European Union in Italy.

Sarah Qureshi holds a Post Graduation degree in Politics from Jamia Millia Islamia University, New Delhi. Her interests include geopolitics of the Indo-Pacific with a focus on the use of diplomacy.