Slow but steady – How is the QUAD faring? 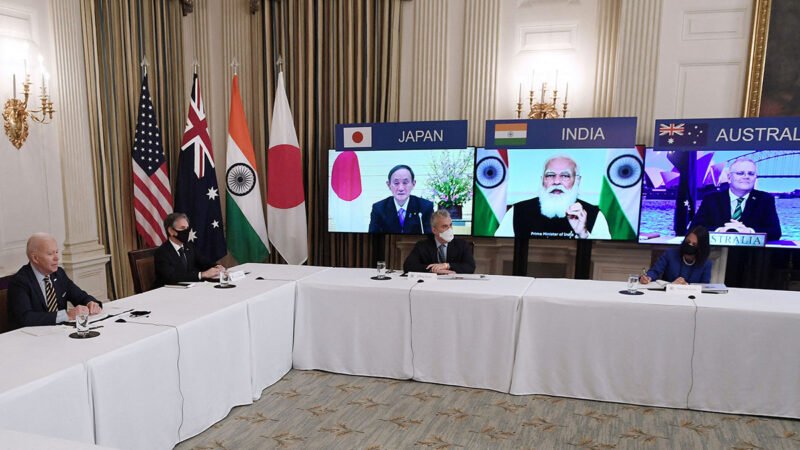 Maritime alliances amongst QUAD members are leading to novel and recurrent engagement concepts addressing the Indo-Pacific security system. Having built a fascinating vision and a whole “spirit of the QUAD,” this arrangement has a distinct charm. Through a variety of military and commercial initiatives, QUAD is influencing and revitalising the Indo-Pacific. The introduction of the Neutralised Automatic Identification System (AIS), is the latest creative strategic initiative to ensure a safe corridor in the Indo-Pacific. Initiatives from the United States involve safeguarding partners against China’s “aggressive approach”. Synchronising India’s urgent need to secure its territory against Chinese aggression, leads it to a unique and shared vision to establish free and open waters in the Indo-Pacific with other QUAD partners. Thus, this arrangement of QUAD could be the decisive factor in cultivating and shaping the future of Asian politics.

At a cursory glance, the progression of QUAD deems minimal when compared to its influence on world politics, however, it is incumbent to understand another aspect fueling the progression of QUAD i.e., China’s incessant threat to the Indo-Pacific status-quo. With its inaugural Virtual Leaders’ Summit being held in March 2021, QUAD has since developed and achieved a level few would have predicted. Washington, D.C hosted the inaugural QUAD Leaders’ summit in September 2021, the former Australian Prime Minister Morrison, Indian Prime Minister Modi, and the then Japanese Prime Minister Suga were in attendance. Thereafter, QUAD leaders virtually gathered again on March 4, 2022, to reaffirm their commitment to the Indo-Pacific and to discuss the ongoing violence and humanitarian situation in Ukraine.

The uniqueness of QUAD

In March, last year (2021) a declaration laying out the “spirit of the QUAD”, noted, “We bring diverse perspectives and are united in a shared vision for the free and open Indo-Pacific.” Quite evidently the objective is to build a region that is liberated, transparent, welcoming, healthy, based on liberal ideals, and unbounded by violence.

QUAD has successfully responded to the situation caused by the coronavirus pandemic. To understand the challenges of the virus, in 2020, a meeting was held between the QUAD members. The effects of the pandemic (Covid-19) on the economic sector, public health, climate change, and dealing with standard problems in marine domains were also pondered upon. Strong monetary investments in cyberspace, crucial technologies, counterterrorism, and quality infrastructure were also looked into. Furthermore, countries such as Vietnam, South Korea, and New Zealand were invited to find ways to curtail the pandemic. Brazil and Israel, two nations sharing no border with the Pacific Ocean, were invited to the second meeting in May 2021 to talk about the distribution of COVID-19 vaccines, illustrating that the openness of the dialogue is not restricted to the member states only.

The dialogue has developed a holistic aspect as national leaders, foreign ministers, senior officials, and experts from the QUAD nations communicate with each other regularly. This lays the groundwork for an even greater partnership in which leaders might be able to influence political developments in South Asia.

Moreover, satellite data about the maritime movements of Chinese vessels under the ‘Indo-Pacific partnership for maritime domain awareness’ program is being shared with smaller South Asian nations, the goal remains to maintain peace and prosperity while boosting universal ideals of democracy.

India has successfully emerged as a leading member of the QUAD. Indian inclination to QUAD provides it with a competing chase to influence Asian politics. To resist China’s ambitious attempts to engulf the Indo-Pacific, India, the US, and a few other nations have repeatedly emphasised the necessity for a free, open, and rule-based Indo-Pacific.

Since May 2020, tensions between China and India have escalated, with PLA forces developing infrastructure along the Ladakh border. The QUAD  arrangement has boosted India’s ties and confidence with the United States. In the QUAD meet held on 11 February in Melbourne, the United States released a lengthy statement on its broadening strategic collaboration with India.

In an interview conducted by CNBC retired Maj. Gen. Dhruv Katoch of the Indian Army claimed that “While the QUAD as of now is not a security organisation, it has the potential to quickly metamorphose into one”. The quadrilateral security dialogue is strengthening the strategic alliance between the US and India.

Since the very beginning, the United States has played a primary role in this non-military partnership and now as stated by President Biden, the US “ Envisions an Indo-Pacific that is open, connected, prosperous, resilient, and secure—and are ready to work together with quad partners to achieve it.” The United States is also willing to support partners against China, that is, influencing world politics with each passing day.

US Defence Secretary Lloyd James Austin highlighted Chinese over-enthusiastic military exercises along Indian borders, and suggested that America should stand behind its partners who are protecting their territorial rights against Beijing’s cunning “war tactics” and “aggressive approach”. Austin also highlighted that Delhi’s growing military capability and technological prowess can be a stabilising force in the region. Therefore, the claims to back other QUAD partners could enable India to challenge China in shaping the future of Asian politics.

Japan’s case has been intriguing, former Japanese prime minister Abe proposed that Australia, India, Japan, and the United States construct a ‘Diamond’ to protect the maritime region stretching from the Indian Ocean to the Western Pacific. Japan aims to deal with North Korea’s nuclear development, the PRC’s rapid military modernization, and resolve the ongoing dispute over the Senkaku Islands. ‘New Defence Policy Guidelines’ are being studied by the Japanese authorities to alter their military orientation.

The expansion of military cooperation between Japan and other QUAD members has been most notable. Japan’s regional diplomacy includes building economic ties with its neighbours and partners throughout the Indo-Pacific region. Indeed for Japan,  QUAD has emerged as an important trade and investment outlet during the last 20 years. In 2019, Australia ranked fifth among Japan’s trading partners. Furthermore, India has become an important market for both Japanese exports and Official Development Assistance Funds (ODA). In 2018, India received the highest Japanese aid, with 15.6 percent of Japan’s total ODA going toward infrastructure and other investments in the Indian economy.

The QUAD agreement is an imperative factor in Australian foreign policy and significantly improves their capacity for negotiations and alliances with the rising powers being ‘India’, ‘Japan’ and the ‘United States’. Australia, in addition to QUAD, has also joined the AUKUS, which is a bloc started by the United States. The Australian-US Ministerial Consultations that took place in July 2020, inspired deeper cooperation between the two nations as they vowed to step up their support for the Pacific Island territories. Interestingly, Australia subsequently received USD 118 million from the US to support its COVID-19 relief efforts.

India-Australia relations have blossomed over the years with 17 percent of products being imported from Australia to India through coastal routes. With $22 billion in bilateral trade between the two nations, India ranks among Australia’s top trading partners. Project Sagarmala (Security and Growth for All in the Region) and Project Mausam are operations carried out under India’s action-oriented Act East Policy. Parallel to this, Japanese foreign direct investments have also surged under the Japan-Australia Economic Partnership, making substantive progress in conjunction with the Australian Pacific Step-up initiative.

QUAD is in a unique position to help meet Asia’s expanding demands for funding and developing infrastructure. Willingness runs high, just like the Japanese Prime Minister Kishida on, 24 May 2022 hosted the fourth QUAD Leaders’ Summit, other leaders have also prepared to inaugurate several initiatives including marine security collaborations that would allow member nations to monitor illicit fishing, follow ‘black ships’, and operationalise other tactical-level action plans. There exists perfect confidence that this critical maritime accord between the QUAD member nations would strengthen the Indo-Pacific region’s security system.

A media statement released by the white house claims that the world has entered a “decisive decade that holds considerable promise and historic obstacles for the indo-pacific, the American role in the region must be more effective and enduring than ever”. Indeed, a commitment has been made to put in place, a plan to reveal key and emerging-technology task groups to accelerate collaboration and coordination on international standards and creative technologies for the future.

Tejvir Bawa holds a graduate degree in Political Science from Zakir Husain Delhi College, University of Delhi. His areas of interest are energy security, military history and war studies || Anmol Rattan Singh is pursuing a Master’s in Public Policy from Jamia Hamdard and is deeply interested in international relations and geopolitics.