Vostok 2022: The military exercise to watch out for 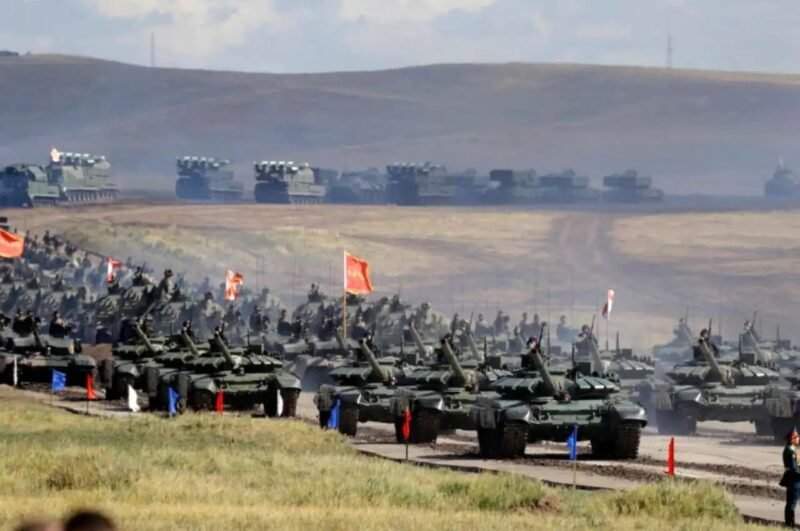 The Russian Federation-led Military exercise “VOSTOK 2022” is going to be held in the far east district in Russia from August 30-September 5. The exercise will see the militaries of China, India, Belarus, Mongolia, Tajikistan, and other countries to be in action together. China has allowed the People’s Liberation Army (PLA) to participate in the upcoming drill, while the Indian side is still to officially communicate its presence. But the highly placed sources in the media and government have confirmed that India is going to participate with its military in the exercise.

According to the Russian news agency, TASS “Vostok 2022 ” strategic command and staff exercise will be conducted under the command of Chief of the Russian General Staff Valery Gerasimov at the District’s 13 training grounds. The exercise will see contingents employing combat groups in ensuring military security in the Eastern region.

The eastern region of Russia includes strategically important districts of Siberia with its headquarters in Khabarovsk, near the Chinese border.

Kremlin’s Message to the West

This year’s exercise is going to be significant in many aspects. This is the first such multilateral military drill to be conducted after Russia annexes Ukraine on what the former has called “Special Military Operations”. In Response to this war of attrition, the west led by the United States has imposed significant sanctions on the Putin regime both politically and economically.

Vladimir Putin through this exercise has tried to send a message to the West that it still has the diplomatic capabilities to organize other nations with him despite being left as a ‘pariah’ state by the west. One of the stated aims of the war is to restore the Russian Federation to its Lost glory of the earlier Russian empire.

Western scholars in recent times have termed Russia as a ‘retreating power’, but the reality is Russia with its vast geography and resources like Gas still commands a dominating position from Asia to Europe. This can be gauged from the fact that the whole of Europe depends on Russian gas to power its economy and any disruption to it will bring the European powers to their knees. This is the reason why Germany and France have insulated the Russian gas from their wide range of sanctions.

If there is one crucial development to watch out for in this Geopolitical churning, it’s the growing bonhomie between Moscow and Beijing. The Sino-Russia relationship is at its peak since the end of the cold war. Both the countries under their respective leadership have taken the relationship to new heights and termed it a ‘No Limits Partnership’. Their relationship has much more depth and substance with cooperation in areas ranging from political, and military to cultural exchanges.

While announcing their participation in the exercise, China’s defence ministry said “The aim is to deepen practical and friendly cooperation with the armies of participating countries, enhance the level of strategic collaboration among the participating parties, and strengthen the ability to respond to various security threats,” the statement said. In recent times China and Russia have undertaken numerous military exercises across land and sea to increase mutual trust and interoperability among their militaries.

All these endeavours suggest that there is a natural meeting of minds among both nations and the relationship enjoys more political backing at the highest level. The siding of Russia to the Chinese orbit is much to do with the activities of the west especially the United States of America. The misplaced obsession on the part of the USA to sideline Russia from the global order has made the Russians go for tacit alignment with China.

Where does India fit into the equation?

As far as India is concerned, there is a lot of delicate balancing for New Delhi to do. At one end there is the West and Russia and to the other end are Russia and China, India has a lot of manoeuvres to do to make a diplomatic space for itself. The Biggest concern among the Indian Strategic circle is the growing closeness between Russia and China. As noted by the former Foreign Secretary of India Ambassador Shyam Saran, a weakened and junior partner Russia is not in India’s interest. There is a substance to the Ambassador’s statement. India’s defence hardware is majority based on Russian spares and parts and any disruption to it under the undue influence of China will be a grave threat to India’s National security. This was the reason why the Defense Minister of India Rajnath Singh has to travel a long way to Moscow to ensure an uninterrupted supply of defence spares aftermath of the Galwan valley’s clashes with China.

Similarly, the historic and time-tested relationship with the Russian Federation has stopped India from directly condemning Russia for the invasion of Ukraine. It has only symbolically pointed to Russia for its action. India has also refrained from joining the western led sanctions on Russia despite being under pressure from various quarters. India’s Foreign minister has accurately pointed to the unfair western diktat to toe its line. He said during a conference in Slovakia that “Europe has to grow out of the mindset that its problems are the world’s problems but the world’s problems are not Europe’s problems”.

West needs to mend its ways

The time has come for the western world to see the present order in terms of what it is rather than what ought to be. It cannot compel other nations to choose sides and be in a particular bloc. Every country has its own sets of problems and issues which may not converge with the others, India is a prime example of that. Its Geography and the geopolitical happenings around him do not allow him to abandon Russia. While the West especially the United States is an important strategic and pivotal partner for India but the latter has a bigger challenge in the form of Rising China to its Land borders. The west needs to take a holistic picture into account while seeing the world as a whole.