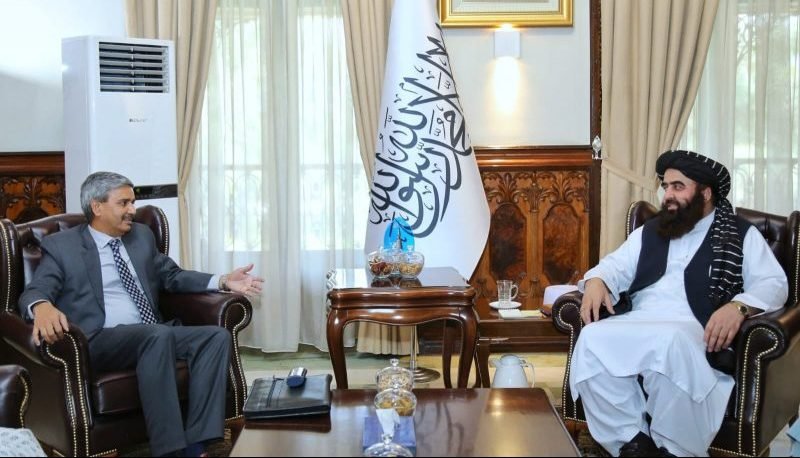 After the Taliban took over Kabul, Prime Minister Narendra Modi expressed concerns and raised questions about the legitimacy of the new Afghan regime. He wanted the international community to decide on the critical question of granting “recognition” of the new regime in Kabul, which has been in place since August 15, 2021.

For the first time after nine months of these developments, an Indian official team met and had meetings with Islamic Emirate Foreign Minister Amir Khan Mottaqi on June 3, 2022, in Kabul. The team was led by senior officer J P Singh, the Joint Secretary in the Pakistan-Afghanistan-Iran division in the Ministry of External Affairs. Interestingly, India made IFS officer Deepti Jharwal part of the Indian team meeting Taliban leaders. This was to show that India values women’s participation in administration. The Afghan cabinet is devoid of women.

Has India officially recognised the hardline Taliban regime in Afghanistan with this visit? In the absence of any such declaration to this effect, no such presumptions can be made. There is no international consensus to consider the Taliban government as it is not considered an inclusive government. It has not fulfilled the United Nations Security Council’s counter-terrorism obligations under international human rights law and international humanitarian law. In the late 1990s, only Pakistan, Saudi Arabia, and the US recognised the first Taliban regime. But this time around, none have recognised the Taliban government. There is no rule for states to recognise other governments. Countries may like to have diplomatic relations though they do not recognise a government’s legitimacy.

In the case of the Islamic Emirate, various states, including India, are dealing with the Taliban to provide humanitarian assistance. While India closed its embassy in Kabul soon after the Taliban took over the reins of administration, some countries continued to have their embassies. India, while withdrawing its officials from Kabul, is maintaining its office.

India has been generous in sending humanitarian assistance to the people of Afghanistan even after the Taliban takeover and since the US withdrawal. The country is facing a severe humanitarian crisis. There is a shortage of food. The healthcare and banking systems have collapsed. According to the UN, Afghan children are starving to death daily. The economic crisis is so acute that people have resorted to beggary, while scores of families are going hungry. There is no employment generation. The plight of women and girls is inexplicable as they are barred from having a formal education and also from getting paid jobs. The economic sanctions by the US and other countries, along with the slashing of World Bank-funded programs, have pushed Afghanistan into a deep crisis. This was a country that was utterly dependent on the US for its economy to run.

For its own stated and unstated reasons, India has been coordinating with the Taliban to provide food and medicine. Before the Indian delegation stepped into Kabul, India had dispatched 20,000 tonnes of wheat, 13 tonnes of medicine, 50,000 doses of Covid vaccine, and winter clothing. The consignments were delivered to the Indira Gandhi Children’s Hospital, Kabul. More grains and medicines are expected to be sent. India has donated one million doses of Covaxin to Iran for Afghan refugees there. Through Unicef, 60 million doses of polio vaccine and two tonnes of essential medicines have been supplied, as per a statement by the Ministry of External Affairs.

India’s relationship with Afghanistan is deeply rooted. Since the US toppled the Taliban regime in 2001, India has invested huge sums in infrastructure projects in that country. Some of the important projects are the $150 million Zaranj-Delaram highway in south-western Afghanistan. It facilitates India’s trade with Afghanistan through Iran’s Chabahar port and thus bypasses Pakistan. India’s investment in the port is about $500 million. It gives New Delhi access to Kabul and Central Asia. Through a strategic partnership, India assisted the Afghan military.

In 2020, India announced its plans to construct the Shatoot Dam in the Kabul district. This is in addition to several other major and minor projects. India’s investment was ruled between 2006 and 2001 when the Taliban ruled. India created an opportunity for itself after the collapse of the Taliban’s first government in 2001. It was put back after the 1999 Kandahar hijacking incident. It tried to maximise its footprint by investing time and money in the US-backed Hamid Karzai-led government. All the ongoing projects have come to a standstill since August 2021.

There was speculation that New Delhi lost its leverage on Afghanistan after the US ended its 20-year war. But the latest visit of Indian officials doesn’t support this speculation. India, while asking the media not to read too much into the visit, said it would try to visit several places in that country where India-assisted projects and programmes are being implemented.

Afghan Foreign Minister Amir Khan Muttaqi has already announced that his country wants India to resume its stalled projects, reopen the embassy, and offer consular services to Afghan students and patients, among others. He has also thanked India for its recent humanitarian aid. However, the MEA maintained that the purpose of the visit was to oversee the delivery operations of humanitarian assistance.

In an interview with an Indian media house, Afghan Defence Minister Mullah Yaqoob insisted that his government will safeguard India’s efforts to revive relations, and the first step would be to have good diplomatic relations. Afghan External Affairs Minister Amir Khan Muttaqi has said that India should resume its projects in Afghanistan. He had said that his country would not hurt anyone on Afghan soil. He has also claimed that Afghanistan now has no association with al-Qaeda, and separatist groups have been crushed.

Whether India believes in these claims or otherwise, for it, Afghanistan is geopolitically crucial. To reach the five Central Asian Republics and to checkmate Pakistan and China, Afghanistan holds importance. No doubt, Afghanistan and Pakistan continue to have border demarcation issues. But what is more concerning for Islamabad is the Taliban’s unstinted support of the Tehreek-e-Taliban Pakistan (TTP), which is working against Pakistan. This raises the question of how far the Taliban government is true to its claims that it will not support terror operations from its territory.

New Delhi prefers to engage with an elected government in Kabul. But it has no option but to move on for its own stability in the region as well as to placate any dubious moves by Pakistan. India has stumped Pakistan with the visit. Indians have not explicitly contested the Taliban. All it has done is to establish political authority in Kabul and empower the Afghan people. The Taliban government, like its predecessor Karzai government, knows well it stands to gain considerably by renewing its ties with New Delhi rather than cozying up with Pakistan, which in no way improves the condition of Afghans. Pakistan can only contribute further to destabilising Afghanistan.

The MEA has played down its first official visit to Kabul by saying it is guided by long-standing “historical and civilisational ties with the Afghan people.” But the world knows that it is India’s strategic move, coupled with following up its overseeing the humanitarian assistance programs besides the infrastructure projects. It is trying to play a safe game in a given situation. However, India, which has been maintaining neutrality in the internal affairs of Afghanistan for decades, will not remain independent of the international community when it comes to giving recognition to the Taliban government.