The Divided States Of America 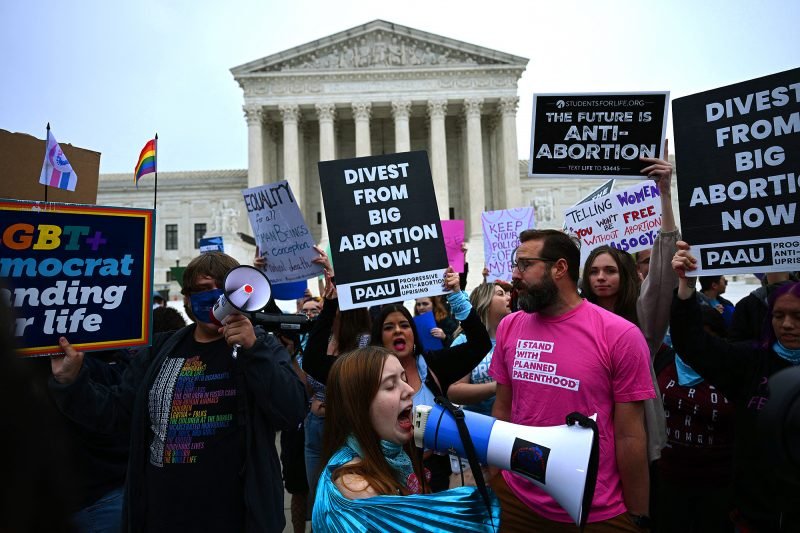 Pro-life and pro-choice demonstrators gather in front of the US Supreme Court in Washington, DC, on May 3, 2022. - The Supreme Court is poised to strike down the right to abortion in the US, according to a leaked draft of a majority opinion that would shred nearly 50 years of constitutional protections. The draft, obtained by Politico, was written by Justice Samuel Alito, and has been circulated inside the conservative-dominated court, the news outlet reported. Politico stressed that the document it obtained is a draft and opinions could change. The court is expected to issue a decision by June. The draft opinion calls the landmark 1973 Roe v Wade decision "egregiously wrong from the start." (Photo by Brendan SMIALOWSKI / AFP) (Photo by BRENDAN SMIALOWSKI/AFP via Getty Images)
PDF Button

The curious case of Norma McCorvey and her quest to get an abortion in the state of Texas gave birth to a historical constitutional case in America, popularly termed Roe v Wade.

In January 1973, the Supreme Court Of The United States in a 7-2 majority verdict ruled that the 14th amendment to the United States Constitution protected a woman’s right to abortion. This case upended the conventional wisdom and in an instant declared many of the state’s abortion laws illegal. Needless to say, the case is one of the pivotal polarizing moments in the history of America which bought conservatives and liberals to each other’s guts and dashed a mortal blow to bipartisanship.

Expectedly In 1992, in Casey v Planned Parenthood, the Supreme Court Of The United States overturned the Roe trimester framework in favour of a ‘viability’ analysis essentially allowing many states to bring the restrictions on abortion.

This ‘expected decision’ might come as a surprise to many considering the three Trump appointees Gorsuch, Barrett and Kavanaugh hadn’t explicitly stated about overturning Roe and Thomas and Alito had talked about respecting constitutional precedents in their respective confirmation hearings, but if anyone understood politics they did see it coming. After the sudden demise of  Justice Ruth Bader Ginsberg, the court lost the critical balance it was in, a balance that even John G Roberts, the Chief Justice’s often swing vote cannot put to work now.

With midterm elections approaching, this issue can provide enough fodder for both democrats and republicans to serve their constituents. For republicans, it could be a flashing badge of honour they’ve always wanted to show the ‘base’ of their competence and for democrats, it could be a rallying cry for people who think precedents are important and the right to abortion is an essential virtue.

Abortion as an issue is prone to fester the gashed wounds of the past but as a political tool, it can reap wonders or wreak havoc-a side suitable to choose by the contenders.

If Roe v Wade were to be overturned, the next would be ‘expectedly’ the LGBTQIA+ rights on the chopping axe of a reactionary supreme court. With a strong 6-3 majority the Supreme Court can turn every protection granted to the vulnerable section into a non-essential one hence not required.

The slew of peaceful protests outside the justice’s house and subtle yet needed reprimanding of the GOP ‘moderate’ senators who voted for the GOP nominees are a sign that this issue is not going to die anytime soon. The recent effort by the Senate Democrats to codify Roe v Wade provisions into a bill was shot down by Republicans and yes-Joe Manchin. With no legislative recourse possible and no other effort in hand, the democrats can best hope and put their eyes on the midterms. The frugal senate majority unless enhanced cannot pass any measure that could aid the vulnerable in their course to justice. The problem would be to spread the message-an art Democrats are not very good at.

The republicans on the other hand have started using roe as a victory in rallies. With Trump showing no signs of going quietly in the night, he is bound to use the ‘3 justices’ card for his political benefit, an act that could reap dividends.

A country in the midst of a deadly pandemic and eroding hegemony is at a crossroads. The case of abortion and the issue of life’s beginning is probably the most polarizing issue in America. With a majority of republican electorates not believing Joe Biden’s victory in 2020 and democrats seething hatred for Donald Trump, the issue of abortion rights would push the country into further division and discontent.

The era of bipartisanship and collective efforts toward the good of the American people is almost over, the upcoming midterm election would see one of the ignoble and hard-fought political campaigns in modern times. The results would be an eye-opener and an expected shocker but it all certainly divides the nation more or push a united cogent nation towards division. A nation which would look less united but more like The  Divided States Of America.