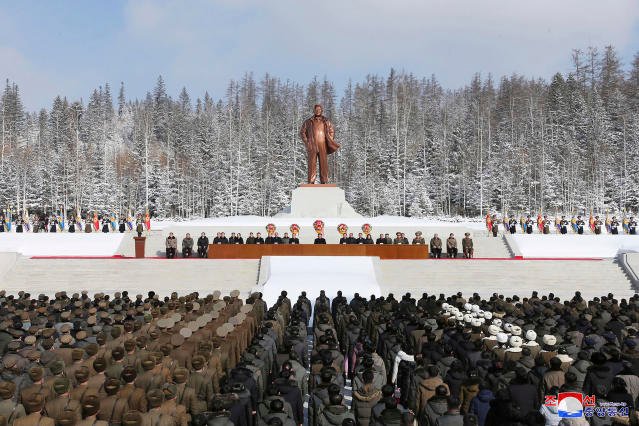 North Korea has celebrated the 80th birthday anniversary of leader Kim Jong Un’s late father with a music concert and fireworks in a refurbished holy city, but no missile launch or military parade, state media KCNA reported on Wednesday.

Kim attended a gathering of government, military and ruling Workers’ Party officials which took place on Tuesday in front of the statue of Kim Jong Il in Samjiyon City to commemorate the anniversary, a major holiday called the Day of the Shining Star in North Korea, KCNA said.

Dubbed the “holy land of revolution” by KCNA, the northern alpine town of Samjiyon is near the border with China and Mount Paektu, the holy mountain where Kim’s family claims its roots.

However, it was rare that North Korea held such celebrations in the remote region.

The young leader has sought to transform the city into a massive economic hub, by building new apartments, hotels, a ski resort and commercial, cultural and medical facilities.

The project has been a key initiative to foster a “self-reliant” economy amid sanctions over nuclear and missile programmes, and Kim has made multiple visits touting it as a “socialist utopia” and “epitome of modern civilisation.”

Kim laid flowers at the statue during the meeting but KCNA did not release any of his remarks. Ri Il Hwan, a senior party official, gave a speech vowing to uphold the late strongman’s mantra of self-reliance, KCNA reported.

“The meeting showed well the firm will and enthusiasm of the participants to … build a people’s paradise prospering with self-reliance on this land,” KCNA said.

The celebrations also included fireworks and a music performance, but no military events, as has been the case in the past.

KCNA released a photograph of thousands of people wearing a olive green or grey suit in the gathering, with the Kim Jong Il statue and a snowy forest in the backdrop.

North Korea conducted a record seven missile tests in January, and has warned it may resume testing intercontinental ballistic missiles or nuclear weapons for the first time since 2017 amid stalled denuclearisation talks with the United States.

Analysts have said Pyongyang could use key holidays, including the upcoming 110th birthday anniversary on April 15 of Kim’s late grandfather and national founder, Kim Il Sung, to carry out a major weapons test.

Those holidays come at a sensitive time as South Korea is set to hold a presidential election on March 9, with formal campaigns starting this week.

Outgoing President Moon Jae-in has warned a restart of North Korea’s nuclear weapon or long-range missile tests could “instantly” send the peninsula back into crisis.