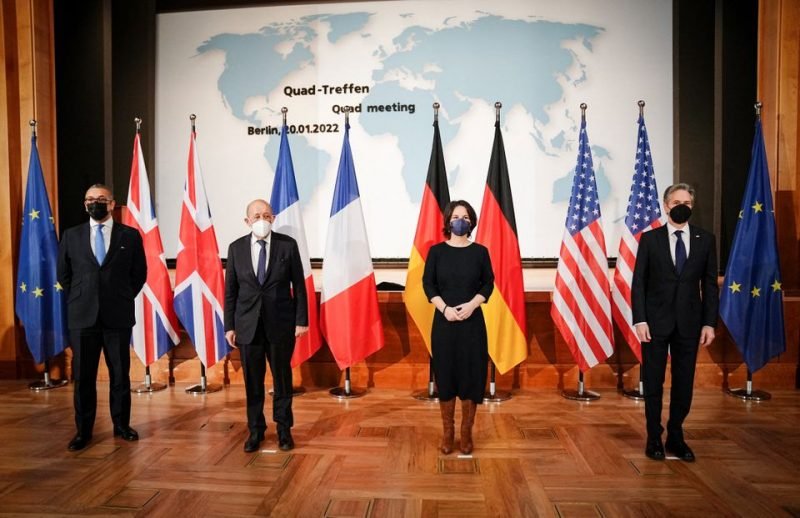 The United States and Western countries sought to project unity and a tough stance over Ukraine on Thursday, after U.S. President Joe Biden suggested allies were split over how to react to any potential “minor incursion” from Russia.

Biden rowed back on his comments, made during a Wednesday news conference, saying on Thursday that “I have been absolutely clear with President (Vladimir) Putin, he has no misunderstanding. If any, any assembled Russian units move across the Ukrainian border that is an invasion”.

Such an invasion would be met by a “severe and coordinated response, economic response as discussed in details with our allies, as laid out very clearly with President Putin,” Biden told reporters.

His remarks echoed efforts from other members of the administration earlier on Thursday and late on Wednesday, as the White House sought to scotch any suggestion that a smaller-scale Russian military incursion would meet a weaker U.S. response.

Russia has massed tens of thousands of troops on its borders with Ukraine, and Western states fear Moscow is planning a new assault on a country it invaded in 2014. Russia denies it is planning an attack, but says it could take unspecified military action if a list of demands are not met, including a promise from NATO never to admit Ukraine as a member.

At his Wednesday news conference, Biden said he expected Putin to launch some kind of action, and appeared to suggest Washington and its allies might disagree over the response if Moscow stopped short of a major invasion.

“It’s one thing if it’s a minor incursion and we end up having to fight about what to do and what to not do, et cetera,” the president said, adding that an invasion would be a “disaster” for Russia.

Ukrainian President Volodymyr Zelenskiy responded sharply to that on Thursday, tweeting in English and Ukrainian:

Biden’s remarks on Wednesday sent his administration and allies quickly into damage control mode, with a stress on unity.

“No matter which path Russia chooses, it will find the United States, Germany, and our allies, united,” said Secretary of State Antony Blinken, speaking at a press conference with German Foreign Minister Annalena Baerbock during a visit to Berlin to meet ministers from Britain, France and Germany.

“We urgently demand that Russia takes steps towards deescalation. Any further aggressive behaviour or aggression would result in serious consequences,” Baerbock told the news conference.

No green light for invasion

British Prime Minister Boris Johnson said: “Be in no doubt that if Russia were to make any kind of incursion into Ukraine, or on any scale, whatever, I think that that would be a disaster, not just for Ukraine, but for Russia.”

Moscow, for its part, said U.S. threats of sanctions were not calming the situation.

With Western countries having long emphasised their united position in public, some officials privately expressed frustration at Biden’s remarks on Wednesday, although they described them as a gaffe, unlikely to alter Moscow’s calculations.

“It was not helpful, in fact it was a gift to Putin, but we should not read too much into it. Biden has not given Moscow the green light for an attack on Ukraine. It was a slip of his tongue, and the official Western position will prevail,” said one Western security source.

Moscow presented the West with a list of security demands at talks last week that produced no breakthrough.

But such moves have had scant impact on Russian policy, with Moscow, Europe’s main energy supplier, calculating that the West would stop short of steps serious enough to interfere with gas exports.

U.S. and European officials say there are still strong financial measures that have not been tried. Germany has signalled that it could halt Nord Stream 2, a new gas pipeline from Russia that skirts Ukraine, if Moscow invades.

But Germany could find itself in a no-win situation if Russia invades Ukraine, pitting Berlin’s main gas supplier against its most important security allies.

Meanwhile, Turkish diplomatic sources said on Thursday that both Russia and Ukraine are open to the idea of Turkey playing a role to ease tensions between the two countries, as proposed by Ankara in November.