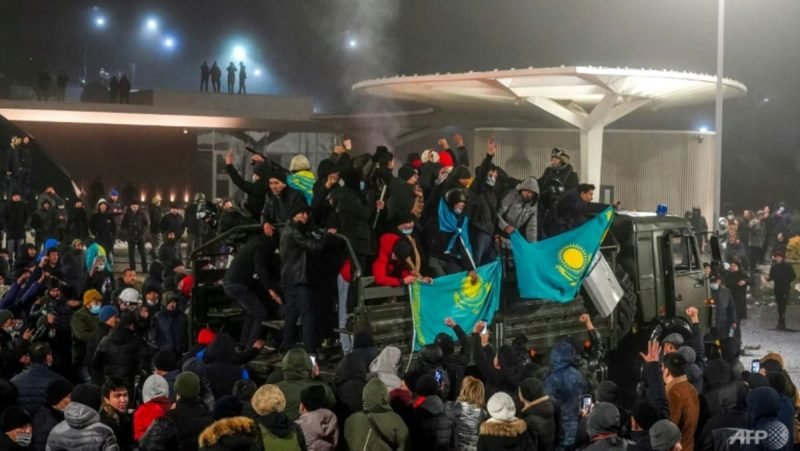 A Russia-led military alliance said it would send peacekeeping forces to “stabilise” Kazakhstan, blaming mass protests that have plunged the ex-Soviet country into chaos on “outside interference”.

Long seen as one the most stable of the ex-Soviet republics of Central Asia, energy-rich Kazakhstan was facing its biggest crisis in decades after protesters angry over rising fuel prices stormed government buildings.

Kazakhstan’s President Kassym-Jomart Tokayev said in an address to the nation early Thursday that he had appealed to the Russia-led Collective Security Treaty Organisation (CSTO), which includes five other ex-Soviet states, to combat what he called “terrorist groups” that had “received extensive training abroad”.

The CSTO’s chairman, Armenian Prime Minister Nikol Pashinyan, then said on Facebook that the alliance would send “collective peacekeeping forces… for a limited period of time in order to stabilise and normalise the situation in this country” that was caused by “outside interference”.

Tokayev said that “terrorists” were seizing buildings, infrastructure and “premises where small arms are located.”

He added that they had also commandeered five planes at the airport in the country’s biggest city Almaty and said that Kazakhstan’s air forces were engaged in a “stubborn battle” near the city.

“I intend to act as tough as possible,” he warned in an earlier address. “Together we will overcome this black period in the history of Kazakhstan.”

In Almaty on Wednesday night, AFP correspondents saw hundreds of protesters — some wearing helmets — gathered in the city centre and parading a police vehicle draped with Kazakh flags.

Videos on social media showed protesters seizing weapons, while others showed mostly empty streets with the sound of explosions and automatic weapons firing in the background, after local authorities announced the start of “anti-terrorist” operations.

Protests spread across the nation of 19 million this week in outrage over a New Year increase in prices for liquid petroleum gas (LPG), which is widely used to fuel cars in the west of the country.

Thousands took to the streets in Almaty and in the western province of Mangystau, saying the price rise was unfair given oil and gas exporter Kazakhstan’s vast energy reserves.

After a night of unrest that saw more than 200 people detained, several thousand protesters stormed the mayor’s office in Almaty on Wednesday afternoon and appeared to have seized control of the building.

Police fired stun grenades and tear gas at the crowd, some armed with batons and shields seized from police, but were unable to prevent them from entering the building, an AFP correspondent at the scene said.

Local media said protesters then set their sights on the presidential residence in Almaty. Both it and the mayor’s office were reported to be in flames.

Kazakh media reported that at least eight police officers and military servicemen were killed in the unrest, including two while clearing the airport.

The full picture of the chaos was still emerging after authorities disrupted communications for several hours on Wednesday, including a nationwide shutdown of the internet, the blocking of online messengers and cuts to mobile phone services.

The protests are the biggest threat so far to the regime established by Kazakhstan’s founding president Nursultan Nazarbayev, who stepped down in 2019 and hand-picked Tokayev as his successor.

Tokayev tried to head off further unrest by announcing the resignation of the government headed by Prime Minister Askar Mamin early on Wednesday.

He also announced he was taking over from Nazarbayev as head of the powerful security council, a surprise move given the ex-president’s continued influence.

But with protests escalating, the government late on Wednesday said a state of emergency declared in protest-hit areas would be extended nationwide and in effect until January 19.

Much of the anger appeared directed at Nazarbayev, who is 81 and had ruled Kazakhstan since 1989 before handing power to Tokayev.

Many protesters shouted “Old Man Out!” in reference to Nazarbayev and images posted on social media showed a statue of the ex-president being torn down.

“Kazakhs are accustomed to patience, but we have grown tired,” protester Rafik Jarylkasyn told AFP in Almaty. “We’ve had enough.”

Moscow, a close ally of the Kazakhstan regime, called for a “peaceful solution… through dialogue, not through street riots and violation of laws.”

The EU and the UN called for “restraint” on all sides, while Washington urged authorities to allow protesters to “express themselves peacefully.”

Spontaneous, unsanctioned protests are illegal despite a 2020 law that eased some restrictions on freedom of assembly.