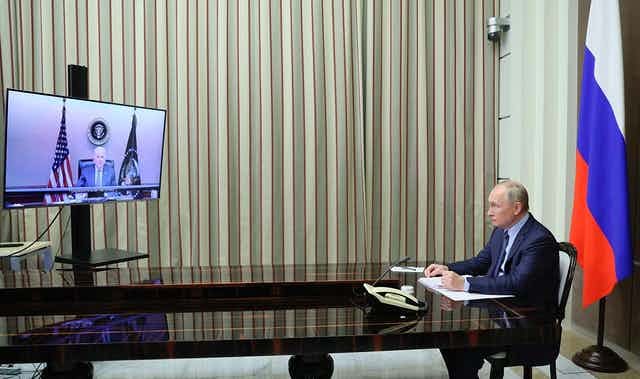 The Biden administration is threatening harsh, “high impact” sanctions against Russia if it invades Ukraine.

U.S. intelligence officials say Russia has been preparing for a potential invasion by amassing tens of thousands of troops along the border and engaging in other aggressive tactics. President Joe Biden and his Russian counterpart Vladimir Putin held a virtual summit on Dec. 7, 2021, to discuss the matter.

The new measures would come on top of a wide array of already existing sanctions against Russia imposed both earlier this year and over the past several in response to Moscow’s criminal cyber activities, its takeover of Crimea – a peninsula in the Black Sea that was a part of Ukraine – and its support for rebel groups in eastern Ukraine.

Policymakers claim that sanctions are an effective means of achieving policy goals. But is that true? Are new measures against Moscow likely to be successful?

Research on sanctions that I and others have conducted has shown that yes, they can sometimes be effective.

But there are serious problems with additional U.S. sanctions on Russia.

While it’s unclear what new sanctions the U.S. might unleash, early reports suggest they may target Russia’s financial system, including its biggest banks and ability to convert rubles into dollars. Such sanctions would be meant to punish Russia’s economy, Putin allies and the country’s wealthier residents.

For these or similar sanctions to be effective the United States would need allies. Past U.S. measures against Russia have often been unilateral and without the support or participation of other major states or the United Nations.

A landmark study published in 1997 by the Peterson Institute for International Economics found that unilateral U.S. sanctions achieved their foreign policy goals only 13% of the time. More recent quantitative research shows that multilateral sanctions involving several countries are more effective than unilateral measures.

The rare instances when unilateral American sanctions worked involved countries that have extensive trade relations with the U.S., clearly not the case with Russia. Russia is low on the list of U.S. trading partners, and previous sanctions on Moscow have further reduced commercial relations with the U.S. Russia is not dependent on U.S. trade and thus is unlikely to submit to American economic pressure.

Furthermore, when a targeted country faces sanctions, it can seek commercial ties elsewhere. This was the case with Cuba. When the U.S. imposed an embargo on its former trading partner after the revolution in 1959, Havana turned to Moscow for help and became a part of the communist bloc. Sanctions had no impact in changing Cuban policy.

In recent years, Russia has been increasing its commercial relations and energy cooperation with China, which will make it less susceptible to U.S. economic pressure.

There are reports that European allies have been convinced by U.S. intelligence assessments that the threat of more sanctions is warranted – but whether all EU members will agree to go along with them is another matter.

Russia is the European Union’s fifth-largest trading partner, while the EU is Russia’s biggest. Moscow’s extensive commercial ties with states in the EU would allow it to mitigate the impacts of sanctions that do not have full European support and cooperation. Russia supplies Europe with much of its natural gas, assuring access to trade and revenues regardless of U.S. measures.

Germany and other European countries have expressed concern about Russian activity against Ukraine. And the EU has imposed some sanctions against Russia after the takeover of Crimea.

But in recent years, the European Union has favored diplomatic strategies rather than economic sanctions to decide the future of Ukraine.

It can’t be all stick and no carrot

This raises a second factor influencing the effectiveness of sanctions: the importance of combining penalties with diplomatic bargaining.

My research with economic sanctions expert George Lopez shows that sanctions work best when more coercive measures are coupled with some kind of a carrot to incentivize compliance.

Offers to lift sanctions and open diplomatic and commercial relations also worked successfully in the 1990s and early 2000s to induce the government of Libya to halt is support for international terrorism and give up its program for developing weapons of mass destruction.

The use of sanctions and incentives was also successful in achieving the 2015 nuclear deal with Iran. Rigorous U.S., United Nations and EU sanctions were combined with an offer to lift sanctions if Iran complied with demands to restrict its nuclear program and accept intrusive inspections.

The International Atomic Energy Commission verified that Iran kept its side of the bargain and significantly curtailed its nuclear program, and U.N. sanctions were removed in 2016.

The Trump administration unilaterally abandoned the agreement in 2018, however, and imposed new “maximum pressure” sanctions on Iran. The deal collapsed, and Iran resumed its prohibited enrichment activities.

Negotiations are underway now to restore the agreement. The U.S. has offered to ease sanctions if Iran accepts renewed restrictions on its nuclear program, but the two sides have not been able to reach agreement. The U.S. policy of withdrawing from the Iran deal and reimposing unilateral sanctions abandoned a multilateral diplomatic approach that was working.

Biden’s threat of new sanctions on Russia is unlikely to have much of an impact on Putin’s behavior unless European states support and participate in the decision. An alternative approach might be to support European attempts to negotiate a solution to the Ukraine crisis, using the offer to ease current sanctions as an incentive for reducing the pressure on Kiev.