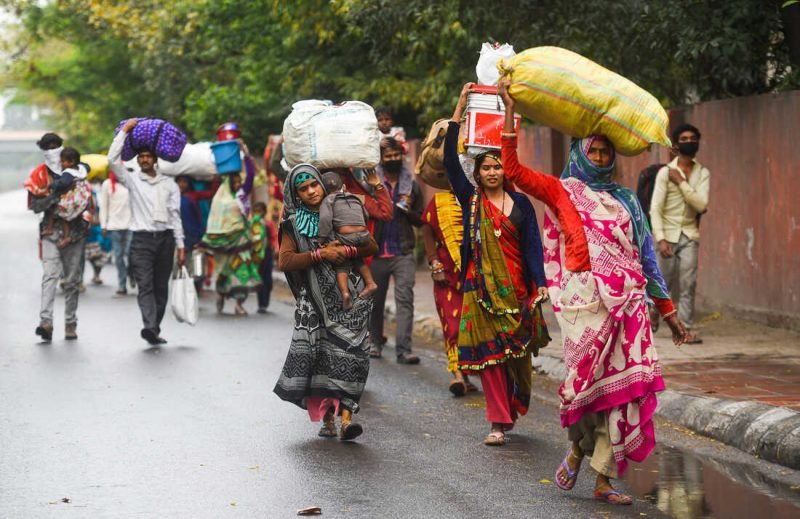 The sudden outbreak of pandemic and worldwide imposition of lockdown caused unprecedented hardship to almost all, especially to those who were living away from their native land in search of better income and employment opportunities and working in the informal sector. Particularly to women, gender inequalities and gender-based discrimination often reduce employment opportunities. It is quite common that migrant women workers, often employed in the job at the bottom rank and also least paid, which typically reflects the social stereotype mindset of patriarchy. While women migrants are least paid but they remit the largest percentage of their income than men. It is ironic that women are least protected and always remain the first target in any economic recession. The ILO has predicted that relative poverty for informal workers and their families could increase by 34%. It is therefore a matter of concern that women who are already at the bottom of the informal economic hierarchy have been born to burn of this economic crisis.

The imposition of lockdowns and shutting of industries and workplaces has adversely shattered the global economy and led to a flood of job loss and reduction in income. As per the 2011 census of India, Jharkhand is one among the 12 states which have high out-migration. Being a rich source of minerals and resources, Jharkhand is still among the poorest states of India. Due to that, the experience of pandemic suffering was relatively heavy in comparison to other states, managing the affairs of returned migrants’ affairs was another burden caused to the state during lockdown

Migrants always remain the major sufferer during any pandemic as they not only suffer economically but multi-dimensionally, as, during the pandemic time, they often act as carriers to the virus or influenza. Talking about women migrants, the risks and suffering became relatively high because of various traditionally constructed stereotype social norms and practices. First and foremost, the thing is low literacy rate among females in states like Jharkhand normally intensifies the risks during pandemics. In pandemic times, it has been seen that many women were either reduced to lower-paying grades or forced to resign during pandemics. During pandemic sexual harassment at the workplace has been also relatively increased, especially to migrant-women of poor states like Jharkhand, Odisha, Bihar etc. In Jharkhand, women are primarily engaged in beedi rolling, collecting fuelwood, agriculture, street vending, domestic, and construction work. Seasonal migration during the off-agriculture season is also common in this Jharkhand. But in pandemic this wasn’t possible to migrate not because of health risk only but due to reduction in employment opportunities to women as well, because it has been seen that construction industries and many other industries were giving priority to male workers over women, even in MNREGA as well, men were given priority. Covid 19 has relatively increased domestic violence, increased the cases of early marriage, and, most importantly, a rapid decline in nutritional accessibility among women.

Although, during the pandemic time both Center and state governments came up with various schemes and policies to overcome this hardship but unfortunately, women were not benefited to a large extent due to prevailing socio-structural norms and gender-based stereos. There is an urgent need of framing separate programmes to supplement women sufferers of the Pandemic.

Akshat Pushpam is a Post-graduate (Gold-Medalist) in Political Science, From Central University of Haryana.