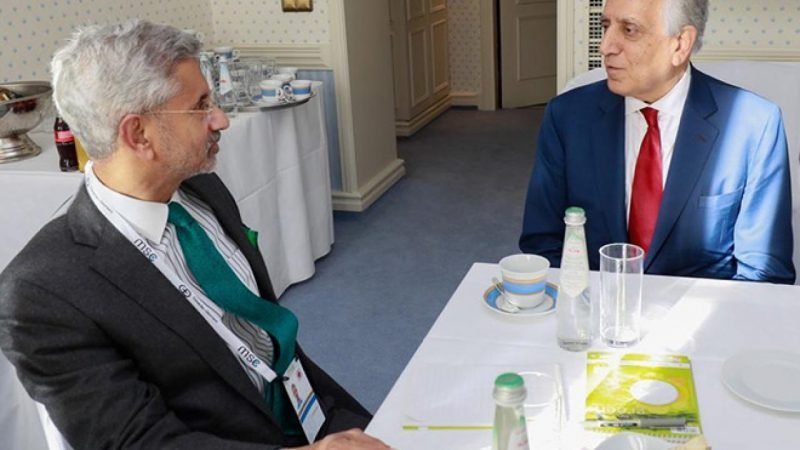 India should be proactive in solving its Afghan Dilemma :

India’s policy with regard to the security of Afghanistan has remained cautious ever since the United States dislodged Taliban rule in the country in 2001. India since beginning has been firm in its approach to not involve itself in the security affairs of Afghanistan. Yet, in the post 2001 scenario, New Delhi furthering its charted policy of soft power did participate in the nation building process of Afghanistan. India took up many infrastructure projects such as building up of Afghan-India friendship dam also known as Salma Dam, the parliament of Afghanistan in Kabul, the Zaranj-Delaram Highway connecting Afghanistan’s Zaranj city to Delaram on Iran’s border to building several schools and hospitals. In 2011, India signed a Strategic Partnership Agreement with Afghanistan to support its security forces by providing them with high-end defence equipments.  However, India was always guarded in its approach and exercised restraint in supplying the defence equipments as it was worried of these devices falling into the hands of the Taliban if they captured power. A decade later, New Delhi’s apprehension came true with the collapse of Ashraf Ghani’s government.

India shares deep historical and cultural linkages with Afghanistan that can be traced back  several centuries. The post-2001 scenario brought a lot of hopes and aspiration between the two countries in rebuilding their bilateral relations which was ruptured during the first Taliban rule. However, in the present framework, the new political dispensation has not just led to security concerns but also derailed India’s trade policy of reaching out to Central Asian nations via Afghanistan.

New Delhi has in the last one month connected itself in the back-channel talks with the Taliban leadership in Doha, unlike during the Taliban’s past regime when India in coherence with global powers refused to recognise it the Taliban govt in Afghanistan. It may be recalled that a few United Nations offices that operated after Taliban takeover in 1996 also shut all their operations in the country by July 1998. However this time around, with the evolving geopolitical scenario and India’s limited options in the regional neighbourhood with hostile neighbours like Pakistan and China, India will have to be more proactive in exploring its feasible options to avoid one more hostile country in the region. In the past few years India has unofficially tried to engage with The Taliban. The Indian government had sent two former seasoned diplomats, Amar Sinha and T.C.A Raghavan, who are also well versed with the Af-Pak region to engage the Taliban in an unofficial talks on 9th November 2018 during the ‘Moscow Format’ of Afghan peace process. Cut to the present, after years of hesitation in engaging the Taliban officially, the Indian Ambassador to Qatar Deepak Mittal met senior Taliban leader Sher Mohammad Abbas Stanikzai to discuss the safe return of its nationals who were stranded in Afghanistan after the group captured power. The Indian ambassador is reported to have categorically insisted on India’s security concerns at the meeting. In the given circumstances the official negotiations between India and Taliban leadership is doubtlessly a major shift  in India’s policy vis a vis  Taliban.

The Taliban captured the seat of power in Kabul on August 15 even as Russia, China and Pakistan seemed least perturbed by the developments. While the entire country was in chaos and other international allies rushed to evacuate their nationals and their partners, the apparent calmness displayed by these nuclear powers, while choosing to remain in Kabul, explicitly expressed their comfort with the new Taliban regime. These three major regional stakeholders have not officially set any new conditions for the new Taliban government, yet it is very likely that Russia and China would not be pleased if the new dispensation turns out to be the caricature of their past, especially going overboard with their religious fundamentalism.

India’s need of the hour:

It might not be an exaggeration to argue that New Delhi immensely missed the writing on the wall  especially when all other powers were in someway or the other negotiating with the Taliban. After  having spent almost $3 billion in the country’s nation building, apparently India in the current scenario is not even a stakeholder in the Afghanistan’s affairs. In the backdrop of unfolding events in Afghanistan, New Delhi should move on from the past and has to figure out a tactical shift in its policy. India has so far stated the any peace process that happens in Afghanistan should be ‘Afghan led, Afghan owned and Afghan controlled’, but given the unprecedented changes, India needs to weigh its options in a more calibrated approach while dealing with the new chaos in its wider neighbourhood. While it would be an utopian idea to expect the Taliban to hold any elections in the country, India must pressurise the Taliban to include all stakeholders in the government and set it as a pre-requisite condition for any diplomatic recognition.

The Indian government must prioritise and carefully weigh its security considerations. While it has upgraded the security apparatus along its borders, the threats posed to India could be entirely different when compared to the previous regimes of Hamid Karzai and Ashraf Ghani. Indian security agencies are concerned about the Taliban and their direct or indirect security implication in Jammu and Kashmir. Earlier this month, many separatist groups in Kashmir valley welcomed the regime change and around the same time, Taliban spokesperson of Doha office Suhail Shaheen, in an interview with BBC, said they have the right to speak for Muslims in Kashmir, India and in the whole world. This statement coming from a senior leader in the Taliban govt raises serious security concerns about an intensification of activities by militant groups in Kashmir with the tactic support of Pakistan’s security agencies. It is worth mentioning that Pakistan was one of the very few countries to recognise the previous Taliban government, while it has in the past and will seek in the future too to use the Afghan territory as its ‘strategic depth’. Thus, it is vital for India’s representatives to categorically define the red lines as and when the Indian government sets about building a relationship with the Taliban government.

Afghanistan is a litmus test for Indian government:

Afghanistan has become a litmus test for leaders and officials at the North and South block. During his visit to Washington D.C in the first week of September, India’s foreign secretary Harsh Vardhan Shringla, while interacting with a journalist, admitted that there have been ‘limited but reasonable conversation’ with the Taliban. The admission holds value as the Taliban government has so far assured India that its interest will not be harmed. Recognition of Taliban’s rule would amount to the impression that India is softening its stance on Islamist fundamentalists and terror propagators. Furthermore, that will augment a larger sense of betrayal among the Afghan nationals who stood firmly against the Taliban as they aspired for a  better future under the now-ousted democratically elected governments. At the same time, back home the Indian government will have a daunting task in communicating to its citizens who have over the decades developed a deep hostility for Taliban given the fears that the group is backed by Pakistan, which might use this to facilitate its agenda of creating instability and propagate terror activities in Jammu and Kashmir.

New Delhi cannot keep itself in an indefinite ‘wait and watch’ mode and allows other nations take the lead in deciding the road ahead in Afghanistan. After being on the sidelines from most of the Afghan peace dialogue in last few years, it is both  imperative and an opportune time for the Indian political and diplomatic establishment to chart its own independent Afghan policy while maintaining its relations intact with the rest of the world.  While prioritising its own security interests, India must not wait endlessly for the global and regional powers or international organisations in dealing with the new government in Afghanistan.  It is time the Indian government prepares a substantial framework if it proceeds to deal with Taliban. If India is to develop any diplomatic relations with the new Taliban government, it must first get an uncompromising assurance that the Afghan territory will not be used as a launch pad for terror attacks on the Indian soil.