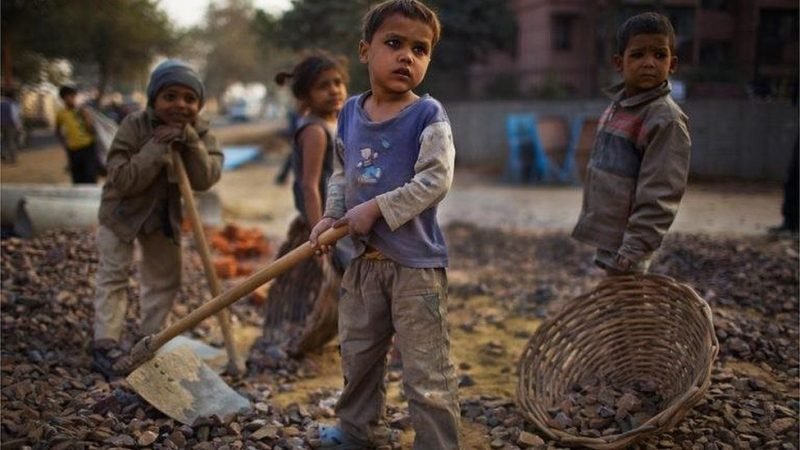 According to a definition given by the Census of India, a child labourer can be easily deciphered as a worker who works for the major part of the day and is below fourteen (14) years of age. This kind of employment deprives them of their childhood and interferes with their ability to attend school and also nears certain social, economic and psychological consequences for them. Approximately 10.12 million children in India have lost their childhood and are engaged in menial economic activities like carpet-weaving, domestic labour, agriculture etc. Children are forced into such hazardous jobs at an early age, owing to extreme poverty prevalent in their families. Some children owing to financial compulsions and lack of awareness are forced to work even in illicit activities such as prostitution. drug trafficking etc. Though the menace of child labour can be easily spotted in almost every industry in India, however nearly 60% of the child labourers are indulged in fishing, hunting and forestry.

International Labour Organisation (ILO) considers poverty as the main cause of child labour as for the poor households, a child’s income is a valuable asset and its contribution to the household is of utmost importance for the sustenance of the child itself and other family members. Lack of affordable schools and awareness regarding the importance of schooling further drives these children to work as labourers and earn two scents for their family members who are already struggling to make both ends meet. The phenomenon of bonded child labour is also very rampant in Indian society which happens to be a part of the informal sector. Bonded child labour is another form of captive slavery where a child is supposed to work as a labourer against a debt or a social obligation by the family of the child.

A child is both a hope and a promise for mankind and the destiny of a nation is shaped in its classroom. It is deplorable to figure out that child labour is so deeply rooted in India as pointed out by a national survey which affirms more than 16 million children between the age of eight to sixteen years working in various hotels, tea-shops and other commercial places and their future is shrouded in a dull cloak of ambiguity and pity. The presence of such a large proportion in menial labour jobs poses a serious threat to the socio-economic well being of India in near future as ramifications of the same are going to be too complex to cope up with. Children who do not get the opportunity to procure good quality education in the nascent years of their life will be deprived of the opportunity to develop themselves mentally, socially and emotionally. The lack of education will limit their ability to be financially secure. Around 70% of the child labourers in India are employed in low skill labour-intensive sectors such as sari-weaving or domestic helpers which do not require any formal education or skill-based training. The lack of formal school education makes them unable to acquire further skillsets or technical aptitude which might make them eligible for some better productive jobs in their future and release them from the vicious cycle of poverty.

However, the magnitude of child labour in India has been witnessing an enormous decline in the past two decades in terms of its workforce participation rate. Meticulous scrutinization of the preventive measures about the eradication of child labour is conclusive of the fact that various proactive measures have been taken from time to time. Indian Constitution has made essential arrangements to ensure universal education which exists in the form of the Right to Education Act and the government has launched various initiatives to corroborate the same such as the “Sarv Shiksha Abhiyan” initiative. Several labour commissions and committees have been set up from time to time such as the National Commission for Labour, The Sanat Mehta Committee, National Policy on Child Labour whose contribution towards the extermination of forced child labour has been commendable to a considerable extent. Various Non- Government Organisations (NGOs) such as Child Rights and You (CRY), Smile Foundation have come forth and contributed to liquidising the menace of child labour.

At the legislative front, Child Labour (Prohibition and Regulation) Act (1986) has been formulated to obliterate this issue. As a part of the National Child Labour Policy, a very comprehensive project entailing the multi-prolonged strategy in the form of the National Child Labour Project has been strengthened and initiated in 1988 which has further given rise to a couple of projects at the district, state and national level. The main area of focus of this initiative has been to target the areas where the concentration of child labour is reposing at its peak. It tends to bring down the intensity of the child labourers in these areas by raising awareness about the education levels and focusing on increasing the gross enrolment ratio. Also, the eleventh five-year plan has emphasized the importance of child development as its core objective which has played an instrumental role in eradicating child labour. It has made several attempts in reaching out to the most vulnerable child labourers.

Though several legislative measures and crucial policies have been formulated about the prohibition and regulation of child labour but, these norms are flouted with impunity due to improper governance mechanisms. Stringent laws with no loopholes need to be implemented so that child labour can be minimized if not rooted out properly. The workplaces which employ children must be confiscated and severely punished to set a precedent. Effective and thoughtful cumulative efforts at the level of an individual, family, community and nation need to be taken out to eradicate the menace of forced child labour.

Himanshi is a Research Intern at The Kootneeti