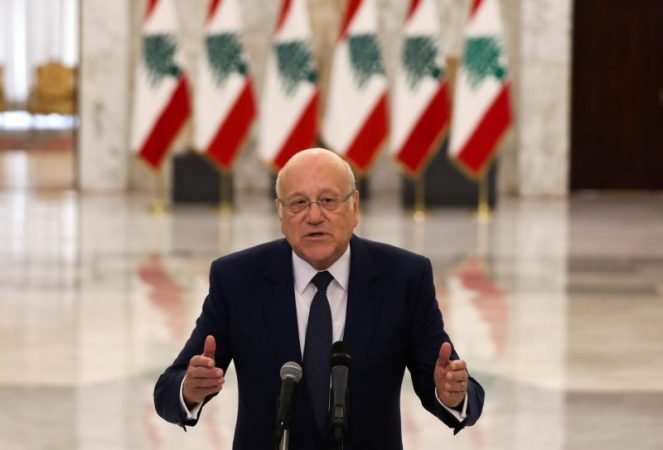 A country facing grave challenges from within and without, Lebanon’s economic crisis, unfolding since 2019, has been described as one of the worst in the world in the last 150 years. It’s been a year since one of the world’s largest-ever non-nuclear explosions ripped through Lebanon’s capital, killing more than 200 people, which have forced the resignation of then Prime Minister Hassan Diab’s government. Rival political groups were locked in disagreement over the make-up of a new government since then, hastening the country’s economic meltdown.

Thus, after a 13-month feud, a catastrophic economic collapse, and despite demands for reforms required to unlock desperately needed aid, Lebanon’s politicians have finally agreed to a new government. The new Cabinet of 24 ministers headed by billionaire businessman Najib Mikati, who has already twice served as premier, was announced by the president’s office, and later by the secretary-general of the Council of Ministers, Mahmoud Makkieh. Ministers were handpicked by the same politicians who have ruled the country for the past decades and whose corruption and mismanagement many blame for the country’s current crisis. “The situation is very difficult. But it’s not impossible if we united as Lebanese. We have to put our hands together,” Mikati told the press. “We are all going to work together, united with hope and determination.” Though PM Najib Mikati is optimistic about getting Lebanon out of the mire, analysts say Mikati and his government have much to do to stop Lebanon from economic freefall – with a turnaround not on the horizon any time soon.

The new government thus formed have an enormous task to overcome the financial crisis prevailing due to the government deadlock. Among its first jobs will be overseeing a financial audit of the central bank and resuming negotiations with the International Monetary Fund for a rescue package to stem the country’s collapse. The new cabinet is also expected to oversee general elections scheduled for next year.

Even before the coronavirus pandemic started in 2020, Lebanon seemed to be headed for a crash. Its public debt-to-gross domestic product was the third highest in the world; unemployment stood at 25%, and nearly a third of the population was living below the poverty line. Now things only seem to worsen after the pandemic, the political sectarianism and the unfortunate explosions as the Lebanese pound has lost more than 90 percent of its value to the dollar on the black market, inflation has soared, and people’s savings are trapped in banks. With foreign currency reserves plummeting, the cash-strapped state has been struggling to maintain subsidies on basic goods. Petrol and medicine have become scarce, the state barely provides two hours of electricity supply a day, and almost 80 percent of the population now lives in poverty.

The international community has repeatedly urged Lebanon to reform its wasteful and ineffective economic sectors, restart negotiations with the International Monetary Fund, and hold general elections scheduled for May 2022.

With the government now formed, Parliament will soon convene to issue a vote of confidence for the Mikati government.

One may wonder how Lebanon has found itself in such a dismal economic, political, and humanitarian crisis. The answer is decades of rampant corruption by a network of virtually untouchable political elites. All the Lebanese people want is stability.

The Lebanese people have not been granted stability yet because of corrupt politicians that have forcefully embedded themselves into the nation’s political infrastructure. The younger politicians are not even being given a chance to have a voice. Simply, the old guys have blocked them out. They know the system inside and out, and they cater to foreign entities that will support them, whether it be financially, militarily. As a result, four out of every 10 Lebanese are out of work.

While Officials and analysts have admitted that major economic restructuring would be necessary to make the country’s economy viable again. The traditional ruling class that has dominated politics in Lebanon since the 1975-1990 war was likely to be reluctant. Although some of the 24 new ministers in Mikati’s cabinet are technocrats, all have been endorsed by at least one of Lebanon’s many competing political parties.

This government was formed with the business-as-usual mentality so everybody there represents one political leadership or the other. This means political parties can use the ministers within the government to block any reform they see as undermining their interests or unpopular in the street. Previous prime ministers have described these reforms as “painful”.

For the first time in more than a year, Lebanon has a functioning government. The question remains, however, whether it will be strong enough to challenge the Iranian-backed Hezbollah from taking over the country. Though, Lebanon’s new Prime Minister Najib Mikati is promising to stop the country’s dramatic economic collapse and is urging politicians to work together. There is no doubt that the terror group runs the Lebanese political order. And through this government, Hezbollah will now lead Lebanon’s engagement with the outside world.

Just recently, Hezbollah portrayed itself as a national saviour, stepping in where the Lebanese government and its Western backers had failed in bringing much-needed aid to a country nearly paralyzed by fuel shortages. It trucked more than a million gallons of Iranian diesel fuel into Lebanon from Syria thus proving their point of a failed state.

Be that it, Lebanon’s new cabinet recently held their first meeting and has agreed on the new policy programme that aims to tackle one of the worst financial meltdowns in history. It included resuming negotiations with the International Monetary fund – for a short- and medium-term support plan, tackling solutions to the fuel and medicine shortage, renew and develop the previous financial recovery plan, Government will work with parliament to pass capital control law and that the parliamentary elections due next spring would be held on time.

As a matter of fact, as part of the new policy, the Government has hiked the petrol prices by nearly 38% to dial back subsidies and reduce gasoline shortages.

However, some experts are of the opinion that due to the changing geopolitics of US withdrawal from Afghanistan and its gradual pullback from Syria and Iraq. Regional actors from Iran to Saudi Arabia are exploring de-escalation. If that progresses, countries like Lebanon, arenas of deadly competing influences, might just benefit.

While many countries like France, US, Egypt, Arab League have already extended their welcome to the new Government. Going forward, Lebanon must prioritize building better institutions and recapitalizing the banking sector. The World Bank has issued a macro-fiscal framework that will get the Lebanese state back on track. It emphasized several important needs:

These are the prerequisites if Lebanon is to ever maintain a legitimate government in the long term. However, to save the Lebanese people from months of dealing with Lebanon’s economic crisis, foreign aid is desperately needed. And even if the new government can make successful reforms and policy implementations, one should not forget that a total economic recovery will take years for Lebanon. The biggest obstacle to the recovery process was the absence of a government. The government formation is indeed a good start, but only time will tell whether the Mikati government can rescue Lebanon from this desperate situation.