Japan: why PM Suga unexpectedly stepped down – and what happens next 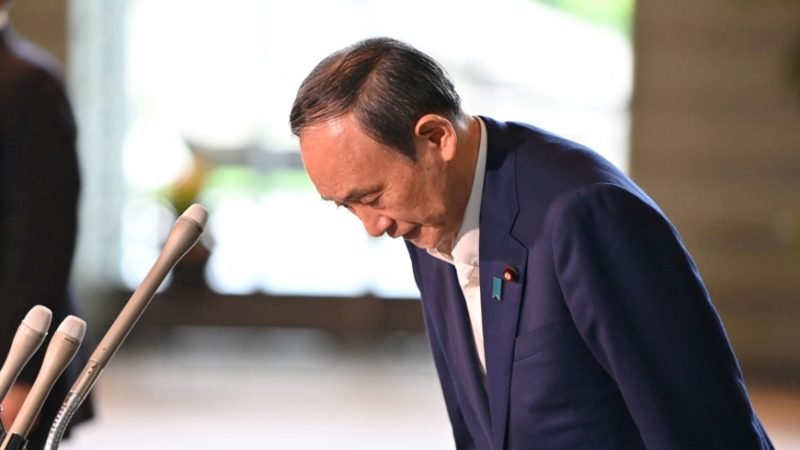 Japan's Prime Minister Yoshihide Suga bows during a press conference at the prime minister's office in Tokyo on September 3, 2021, following his announcement that he will not seek re-election for Liberal Democratic Party (LDP) leadership this month. (Photo by Kazuhiro NOGI / AFP)
PDF Button

Japanese prime minister Yoshihide Suga has announced he will not seek re-election as leader of the ruling Liberal Democratic Party (LDP) next month, which will effectively end his tenure in the top job after only one year. What will this mean for Japanese politics with a general election due later in the year?

Q: Why has Suga made this decision now and where does this leave the ruling LDP?

Suga’s decision to resign was an abrupt change of course. The previous day he met with the LDP’s leadership to announce his intention to run for a second term as leader. The fifth COVID wave, triggered by the delta variant and poor crisis communication, has been his undoing. This led to declining support both within his party and among the public, jeopardising the LDP’s prospects of winning in the upcoming elections.

It is difficult to characterise Suga’s short reign. An uncharismatic figure, he had no overarching message, few signature policies, and no “vision” for Japan. He never fully emerged from the shadow of his predecessor, Shinzo Abe. Even a year into his rule, he still seemed like a caretaker leader.

Unable to recover public support for his cabinet, even after Japan’s very strong performance at the Tokyo Olympics, his approval ratings slid throughout the summer, reaching record lows, and this week plunging below 30%. Suga stepped down in order to improve the LDP’s chances of maintaining power.

Though Japan is considered a mature democracy, the LDP has dominated postwar politics. Since its founding in 1955, the party maintained power until 2009 with just a brief interlude in opposition between 1993-94. After 2009, analysts believed Japan would finally develop into a Westminister-style democracy, in which power would pass back and forth between the conservative LDP and the progressive Democratic Party of Japan (DPJ).

Instead the DPJ ruled for only three years and was unfortunate enough to be running the country when an earthquake and resulting tsunami caused the Fukushima nuclear meltdown in March 2011, leading to a collapse in support. The LDP returned to power under Abe in 2012 and the DPJ collapsed, splintering into smaller less effective parties. Abe went on to become Japan’s longest-serving prime minister.

In 2009, such an outcome was almost unthinkable. It demonstrates the LDP’s incredible election-winning ability, flexibility and pragmatism. Where other leaders cling to power until the bitter end, Suga’s resignation puts party first.

Q: How will Suga’s decision affect the upcoming elections?

The scheduled election for the LDP’s president post was supposed to be a rubber-stamp for Suga’s leadership. His resignation has obviously changed the stakes, and more and more candidates are announcing their intention to run. Meanwhile, the whole idea of staging the leadership election prior to general elections was to lock public and media attention on the LDP at the expense of the smaller opposition parties – so that mission has been accomplished.

The date of the general election has yet to be announced, but by law it must be held by November 14. The fact that rank and file LDP politicians are cheered by Suga’s resignation tells us that, even before his successor is chosen, the LDP’s chances of retaining power have increased.

At this point it is impossible to say who will win the leadership battle. We think there are two candidates to keep an eye on: vaccination minister Taro Kono and Fumio Kishida, Japan’s former minister for foreign affairs.

Q: This is widely thought to be connected with the administration’s handling of the COVID pandemic. Where has it gone wrong?

Suga launched his administration in 2020 with a pledge to prioritise the fight against the pandemic – and Japan was initially seen as a model of how to fight COVID while keeping society as open as possible. But as time progressed, Suga’s administration lapsed into mixed messaging and generally poor crisis communication.

His cabinet promoted a nationwide travel campaign, “Go To Travel”, subsidised by the government, encouraging domestic tourism despite the pandemic. This was criticised by the medical community and was eventually suspended, but not before it contributed to the third COVID wave.

Unable to develop its own vaccines, Japan then lagged behind other countries in distributing its imported shots. It has since caught up, but too slow to ensure the promised “secure and safe” Olympics.

Multiple layers of newly added bureaucracy have further slowed Japan’s crisis response, as the task of fighting the pathogen is divided across various health and economics ministries, with little leadership displayed by Suga to steer a national response.

From an outsider’s perspective, it may still appear puzzling that Suga has resigned while his country’s COVID response has been comparatively good, with fewer infections and much lower death rates than most other wealthy countries. But the public’s perception of Suga’s administration is one of failure: failure to lead and failure to communicate.

Suga rarely spoke directly to the people to explain his goverment’s efforts to address the crisis, instead leaving the task to his cabinet ministers and medical experts. As infections surged and hospitals switched to disaster mode, his low profile proved insufficient in convincing an increasingly reluctant public to follow government measures.

Initiatives such as Go To Travel and, of course, staging the Olympics against the public’s wishes, further muddied the waters. If COVID really is as serious as the government has been telling the Japanese people, why promote tourism and stage a massive sporting event involving thousands of people entering Japan?

Q: What does this mean in terms of political stability in Japan?

The LDP’s core competency is to preserve its power as the ruling party. Suga’s decision serves to avoid internal instability and enables an orderly succession. Lacking his own power base, he came to power only by mobilising support from a range of LDP factions. In light of public frustration with his cabinet and declining approval ratings, the LDP’s internal support for Suga was flagging.

Had Suga stayed on, the LDP would likely have stayed in power but would have lost seats at the election. This would have made governing more difficult and increased political instability. So by resigning, Suga has sent a message that the LDP will take crisis response seriously through renewal at the top while making sure the party does not split further as a result of frustration with his cabinet. Public attention now rests on the LDP’s internal manoeuvring, with little focus on the opposition parties’ policy platforms.

It remains too early to tell what the fallout of this sudden leadership change will be for Japan’s politics. But it seems likely that the party will try to avoid a return to the pattern of [revolving-door prime ministers] with one-year tenures, which characterised Japanese politics prior to 2012.

Within the LDP much will depend on the actions of former prime ministers Abe and Taro Aso (2008-2009), who both still control large factions and are thus kingmakers in the leadership election. With memories of 2009 still fresh, the LDP will surely attempt to signal unity and stability.

Meanwhile, Suga has caught the opposition by surprise, and even before his announcement they have failed to generate a powerful counter-narrative to challenge the LDP.