Explainer: Why does Haiti have earthquakes? 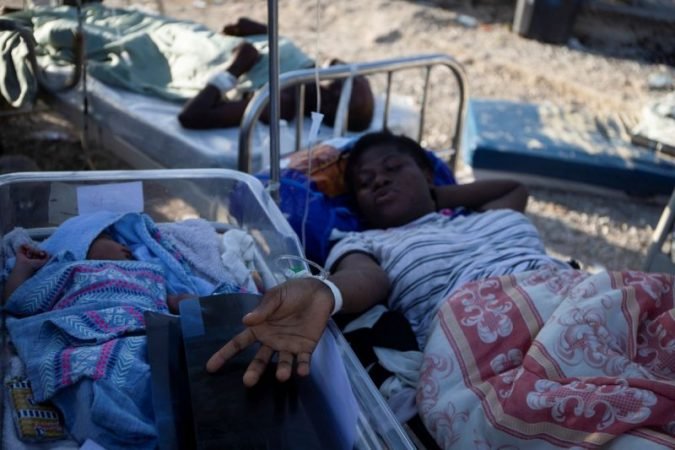 A woman on a stretcher is pictured with a baby after a 7.2 magnitude earthquake in Les Cayes, Haiti August 15, 2021. REUTERS/Estailove St-Val
PDF Button

Almost 1,300 people have been reported killed by a powerful earthquake that rocked Haiti on Saturday, with thousands more injured, and tens of thousands of buildings destroyed or damaged.

The destruction came little more than a decade after a devastating 2010 earthquake that destroyed Haiti’s capital Port-au-Prince and killed more than 200,000 people.

Here’s a look at why the Caribbean country is affected by earthquakes.

What causes earthquakes in Haiti?

Haiti occupies the western part of Hispaniola, a Caribbean island it shares with the Dominican Republic. Hispaniola is sandwiched between two fault systems, the Septentrional fault system to the north, and the Enriquillo-Plantain Garden fault system in the south.

The Enriquillo-Plantain Garden fault system is considered likely responsible for Saturday’s quake, as well as the one in 2010, according to the U.S. Geological Survey (USGS).

Earthquakes happen when two tectonic plates – separate parts of the Earth’s crust – suddenly slip past each other. Though friction holds these two plates together, the sudden release of energy in seismic waves cause the shaking associated with earthquakes.

Saturday’s quake measured 7.2 on the Richter scale, which is used to measure earthquake size, according to the USGS.

Though the quake in 2010 measured 7.0, the Richter scale is logarithmic, meaning that Saturday’s earthquake released twice as much energy as the previous one. It was felt in Jamaica, more than 200 miles (320 km) away.

Damage caused on Saturday so far appears less than in 2010, the reasons for which are being studied.

While the 2010 earthquake struck in Leogane, just outside of Haiti’s capital, Saturday’s quake hit further from Port-au-Prince, in the Nippes department of southwestern Haiti.

Preliminary work suggests the quake’s further distance from the capital and the mountainous, sparsely inhabited location of the epicenter – where a quake starts on the Earth’s surface – could have had an impact, he added.

Will there be more earthquakes in Haiti?

Before the 2010 quake, the Enriquillo-Plantain Garden fault system had not produced a major earthquake in decades, the USGS says.

However, the fault system was probably behind three other major earthquakes, occurring in 1751, 1770, and 1860 respectively, the USGS says, adding that the first two quakes destroyed Port-au-Prince.

Other quakes are likely to happen in the future.

Did lessons from the 2010 earthquake have any impact?

Back then, he said, people exposed themselves to more danger by sheltering in buildings while aftershocks continued.

“We have learned our lesson,” Prepetit said, but added more needs to be done. “We must build better, with better building materials, and then educate the population so that they can develop the right reflexes.”

Reporting by Oliver Griffin in Bogota and Gessika Thomas in Port-au-Prince; editing by Jonathan Oatis