Like Trump, Bolsonaro attacks voting system ahead of poll 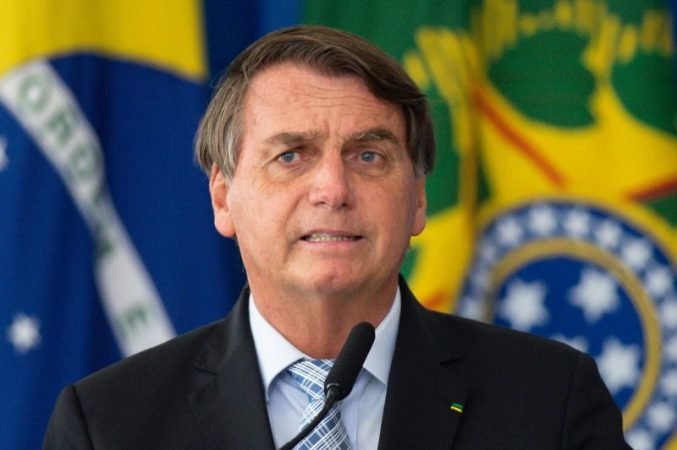 President Jair Bolsonaro has ramped up his attacks on Brazil’s long-established electronic voting system, suggesting he is bracing for defeat in elections next year — and to fight back, analysts say.

In rhetoric that could have been taken from the playbook of his ally, Donald Trump, Bolsonaro has been sniping at electronic voting, introduced in Brazil in 1996, and advocating instead for the use of “printable and auditable” paper ballots in the 2022 presidential race.

People in Brazil cast their ballots electronically at voting stations, and Bolsonaro has for years been arguing for a paper printout to be made of each vote cast, suggesting the absence of a paper trail makes cheating easier.

The far-right leader, 66, is under fire from several quarters; facing an investigation into his handling of the coronavirus pandemic that has killed more than half-a-million Brazilians, and with his popularity at a record low.

Thousands of Brazilians have taken to the streets to protest his leadership.

Facing a potential ouster at the ballot box, Bolsonaro has recently upped the ante, stating this month: “Either there are clean elections or there are no elections,” and insisting he would part with the presidential sash only for a rival “who wins with a verifiable and reliable vote.”

This week, he suggested that if Congress does not approve a constitutional amendment to make it compulsory to print out electronic votes, he might not run.

“Bolsonaro’s comments on the elections are part of a strategy to erode confidence in the electoral system and to facilitate a possible challenge of the results if he does not win,” Oliver Stuenkel of the Getulio Vargas Foundation, a Brazilian think tank, told AFP.

An opinion poll earlier this month put Bolsonaro’s approval rating at 24 percent, the lowest since he ascended to power in 2019.

He is seen as the likely loser in a potential head-to-head contest with leftist ex-president Luiz Inacio Lula da Silva, who recently had a graft conviction quashed on procedural grounds, clearing the path for him to seek a fresh term.

Bolsonaro’s popularity plummeted in January from an all-time high of 37 percent, when his government stopped handing out subsidies to mitigate the economic crunch caused by the coronavirus pandemic in the country of 212 million people.

The drop continued as the death toll climbed and corruption allegations emerged around the Bolsonaro government’s handling of the health crisis.

“This is without a doubt the worst moment of the Bolsonaro government,” said Creomar da Souza, an analyst with the Dharma consultancy.

Fighting back, Bolsonaro is seeking to generate confusion and keep his base united: “He wants to show himself to his constituents as a martyr, as a man persecuted by the system,” said Da Souza.

Bolsonaro had already claimed, without proof, that only fraud prevented him from taking the elections of 2018 already in the first round, and has said that Dilma Rousseff’s victory in 2014 was due to vote manipulation.

Dubbed the “Tropical Trump,” Bolsonaro cultivated a close relationship with the former US president, whom he openly admired.

He backed Trump’s claim of fraud in the US presidential election, and warned in January that the chaos that rocked Washington as Trump refused to concede could repeat in Brazil or “even worse.”

Trump’s refusal to accept the election result over what he claimed was mail-in voter fraud, culminated in a mob storming the US Capitol.

Like Trump, Bolsonaro may be preparing for the aftermath of potential electoral failure: “to remain politically relevant in the eyes of his most loyal supporters,” said Stuenkel.

He often boasts of support from “his army,” hinting it could play a larger political role, and hardline backers at rallies urge the military to intervene to give Bolsonaro the power to rule by decree.

He is a fan of Brazil’s 1964-1985 military dictatorship and has appointed former soldiers to several key position.

Not everyone agrees with Bolsonaro’s approach, and some allies in congress and even some Supreme Federal Court judges have recently contradicted him.

One such judge, Roberto Barroso — also president of Brazil’s Superior Electoral Court — has insisted that electronic voting is safe and said introducing a paper ballot could open the process to “manipulation.”

Bolsonaro, who has been elected to various positions at least six times with electronic voting, retorted by calling Barroso an “imbecile.”