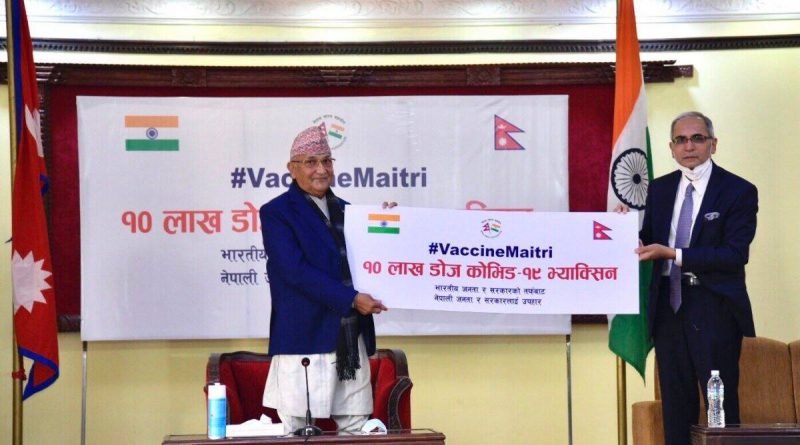 India and Nepal have had relations for centuries, dating back to the rule of the Sakya clan and Gautam Buddha. Both countries share an open border for trade and economic movements and close socio-cultural, religious, and people-to-people contact, which has helped both countries develop their “Roti-Beti” relations. The Indo-Nepal Treaty of Peace and Friendship, signed in 1950, has largely shaped the relationship between the two countries in modern times. The importance of Nepal has been emphasized by the Narendra Modi government’s Neighbourhood First policy. He has visited Nepal six times and has won the hearts and minds of the Nepalese through his speeches.

When Nepal was hit by a huge earthquake in 2015, India was the first country to send assistance under the operation “Maitri,” showing India’s positive role in Nepal. However, it cannot be denied that both nations have had tense relations on a variety of subjects with each other in the past (water, border, and commerce issues) and even now (citizenship, issuing of new political maps, Madhesi crisis, border blockade, and so on).

Even during this pandemic period, India and Nepal have witnessed both cooperation and conflict. For example, the Nepali citizenship act 2020 would have a severe impact on Indian women, under the new law the women’s will have to wait seven years before getting Nepali citizenship. While the law is not discriminatory for Indian women and universally applicable to all foreigners, its impact would be seen most clearly among Indian women because they comprise the majority of the foreign category.

However, a new development in commercial diplomacy between the two nation-states took place with the inauguration of the 69-kilometre Barauni-Amlekhagunj oil pipeline in 2020, the first South Asian cross-border pipeline, which will carry two million tonnes of petroleum products annually and will replace tanker trade that has been practised between the two nation-states since 1973 under the India-Nepal petroleum supply agreement. The pandemic has blurred international borders, and the world is currently battling with Covid, India and Nepal is no exception for it. With the second wave of coronavirus pandemics hitting the Himalayas, Nepal is the most devastated country in South Asia after India. Nepal receives the most remittances from India, and during the entire pandemic period, when both countries were under lockdown, people-to-people contact was disrupted, and even the open border between the two countries became politicised when India was blamed for spreading the virus through open borders.

Even during the pandemic, the Nepalese government decided to close 22 of Nepal’s 35 borders, leaving only 13 operational to prevent the coronavirus from spreading in the southern part of the country. As part of coronavirus containment measures, India’s border with Nepal has been blocked for almost a year. The freight operations, on the other hand, continue, demonstrating that bilateral trade and transportation will take place without allowing unrestricted movement of people. In the last 70 years, the border has never been closed for so long.

During the pandemic, India has made a special effort to enhance India-Nepal relationships by giving grassroots facilities in Nepal to combat the virus. The Prime Minister of Nepal and other senior government officials hailed India’s efforts. “Nepal has been obtaining liquid oxygen from India, and that is the only country from which we get liquid oxygen,” Rajan Bhattarai said. The oxygen demand has increased significantly, and the Nepalese government has been working hard to meet it.” In April 2020, India supplied 23 tonnes of critical medications to Nepal to combat the coronavirus. In January 2021, India once again aided Nepal by delivering one million doses of the Covid vaccination under the name of the “Vaccine Maitri.”

Even the Nepali Prime Minister thanked his Indian counterpart. As part of an aid initiative, India provided 100,000 doses of the same vaccination to the Nepalese military. Nepal also received 348,000 Covishield doses from India through the COVAX programme. In May, the Indian Army delivered medical support worth more than Rs 18.02 crores, including ventilators, ambulances, intensive care unit beds, personal protective equipment kits, and polymerase chain reaction test kits to diagnose SARSCoV2 infections. All of this help has fuelled India’s strategy of neighbourhood first policy.

During the pandemic, however, the two nations became entangled in a border dispute, which began in November 2019 when India issued a new political map, which included the Kalapani, Lipu Lekh, and Limpiyadhura as part of Indian territory and was passed by its parliament. Nepal objected, claiming that Kalapani, Lipu Lekh, and Limpiyadhura belonged to Nepal by the Sagauli Treaty and that India should not use unilateral actions to hurt the sentiments of Nepali citizens. The newly constructed 80-kilometre route from Dharchula in Uttarakhand to Lipulekh increased tensions between the two countries. In return, Nepal revised its constitution in 2020 and published a new political map that claimed Kalapani, Lipu Lekh, and Limpiyadhura as Nepali territories, as well as three Indian villages as part of Nepal.

From an economic standpoint, the pandemic has highlighted two crucial and contentious aspects of bilateral relations. It is the widening of Nepal’s trade deficit with India and the country’s porous borders. As the territorial dispute widens, these issues are gaining new prominence. Despite the border issue, the visit of Nepal’s foreign minister to India successfully directed the sixth meeting of the India-Nepal Joint Commission.

The timing of the high-profile visit was deliberately significant since Nepal is tantalizing India at a high degree of dynamic cooperation. Different advancement associations between India and Nepal have been examined by this joint commission, including the extension of the Motihari-Amlekhganj oil-based commodities pipeline to Chitwan and the foundation of another pipeline on the eastern side connecting Siliguri to Jhapa in Nepal, and the overhauled first traveller railroad line between India and Nepal from Jaynagar to Kurtha via Janakpur,  Nepal has even expressed support for India’s permanent accession to the expanded United Nations Security Council (UNSC). The second wave, however, has resulted in Nepal failing to meet its commitments and being unable to administer the second dose to its citizens because the expected vaccines from the Serum Institute of India under commercial contracts will not arrive, paving the way for China’s state-owned enterprise Sinopharm’s entry into Nepal.

India needs to play an active role in building Indo-Nepal relations stronger to keep Nepal from moving closer to China and to offer ample support for the corona pandemic through various platforms. To strengthen the Neighbourhood First policy, the emphasis should be on the four C’s: the formation of a constitution, the mechanisms for improving cooperation, cultural cooperation, and the improvement of connectivity.