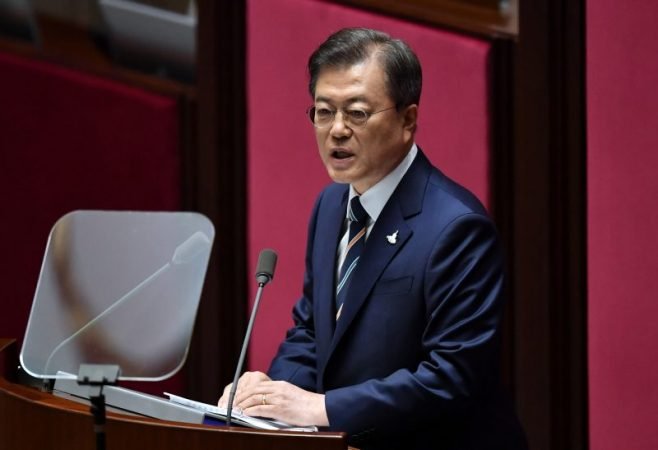 The South Korean President Moon Jae-in 2017 at Jakarta, the capital of Indonesia, launched his new foreign policy called New Southern Policy(NSP). The leader of South Korea appointed an Economic Secretary at its head.  This policy is targeted towards the countries of Southern Asia and India. The purpose of this New Southern Policy is to fill the gap in Korea’s strategic approach to ASEAN and India by placing them as priority partners on all policy fronts. This policy is considered as Seoul’s new regional strategy to diversify its economic and diplomatic alignments in search of greater strategic autonomy. This policy is well reciprocated by India and Southeast Asia.

The core elements in the New Southern Policy are:-

The three pillars of the New Southern Policy are “People, Prosperity and Peace”. The New Southern Policy is an enhancement to the past various policies of Seoul which were focussed either towards Northeast Asia or encompassed all of Asia. This policy is not only limited to economic cooperation with emerging countries but also to build strategic partnerships with them. In its policy framework it also includes cooperation to combat terrorism and other emerging threats in the region. This New Southern Policy of Seoul will make Southeast Asian countries and India to the same level of importance as China, US, Japan and Russia. The NSP also reflects Korea’s sense of heightened self-confidence and the nation’s desire to project its middle-power leadership and influence in the region.

The middle-power ambitions of Seoul to enhance its international stature and identify and to expand its regional leadership and influence and to gain economic benefits through higher investment and trade activities the same goals of Seoul has applied to NSP.

Through economic diversification the NSP wishes to have two fold benefits. First is to secure new markets and new sources of growth for South Korea which was struggling since the 2008 financial crisis. Since ASEAN and India have huge market potential, they can work as an engine to run the economy of South Korea. The second benefit is to reduce its economic reliance on China. The bilateral trade between Southeast Asia and Korea has grown to the level that ASEAN member states as a group stand at second position in terms of trade partnership after China. After the deployment of the Terminal High Altitude Area Defence (THAAD) by the US, China began to impose targeted measures of uneven retaliation on Korean companies. Therefore it is necessary for South Korea to reduce its vulnerability and look for better and sustainable options.

When it comes to regional cooperation New Southern Policy aims to join forces with like-minded countries to a multilateral and inclusive regional architecture. Following this vision Seoul at Commemorative Summit with ASEAN in 2019 reiterated its support for ASEAN-led regional mechanisms like ASEAN Outlook on the Indo-Pacific (AOIP) and Seoul even expressed its desire to cooperate with ASEAN in order to maximize synergies between the NSP and AOIP.

The relationship of both the republics belongs to the ancient times. In the cold war era both the nations maintained distance from each other because for India, Seoul was under the control of the US and for Seoul, India was inclined towards the USSR. When India opened its economy in 1991-92, Seoul got the economic gateway to reach India and develop mutual relationships. The economic liberalization policy of India gave mileage to the Korean companies to invest in India in heavy numbers. Both the countries signed “Comprehensive Economic Partnership Agreement” in 2009 and just after one year that is in 2010 both countries signed “Special Strategic Partnership”.

The relationship between South Korea and India under New Southern Policy was taken to the next level when the Korean President just after getting elected sent a special envoy to New Delhi. The President of South Korea wishes to develop the relationship through people-to-people connections and cultural relationship. The joint statement from the leaders of the both countries in 2018 was a significant step towards taking the New Southern Policy towards a different level when both the leaders agreed on “Shared Vision for Peace and Prosperity for the People of two countries”. Through New Southern Policy, both the leaders together inaugurated the world’s largest mobile phone factory in the city of Noida, India and the bilateral trade as the total trade volume crossed US$20 billion during 2017-18 and 2018-19.

•           The middle-power ambition of South Korea is limited by external geopolitical constraints and by the design of New Southern Policy.

•           The New Southern Policy lacks any strategic and security elements in its virtue and programs. The reason for such a void is to prevent or to minimize the risk of being drawn into the quagmire of US-China strategic rivalry.

•           The next challenge to this policy is the limitation of the balanced diplomacy of Seoul towards its closest security ally and geographically most proximate neighbour. The current stance of the ruling regime of South Korea is to maintain a solid alliance with the US at the same time maintain a strategic partnership with China. This stance of Seoul has ended the operational scope of the New Southern Policy.

•           The issues between Seoul and Tokyo are making it difficult to maintain regional cooperation and ensure regional security.

The New Southern Policy has shown its result in terms of increased bilateral trade between Seoul and ASEAN countries. This policy along with India’s Act East Policy acts as a double engine for regional cooperation. The shortcomings of the New Southern Policy can be reduced strategically as the US can build more trilateral relationships with Seoul and Tokyo which will reduce the distance between Seoul and Tokyo. To counter China, Seoul is part of the QUAD Plus along with Vietnam and New Zealand and whenever there will be a case of increasing the number of members of QUAD, Seoul will be the first choice. This New Southern Policy not only brings the two zones of Asia together in terms of economic cooperation but it also wishes to establish people to people exchange.