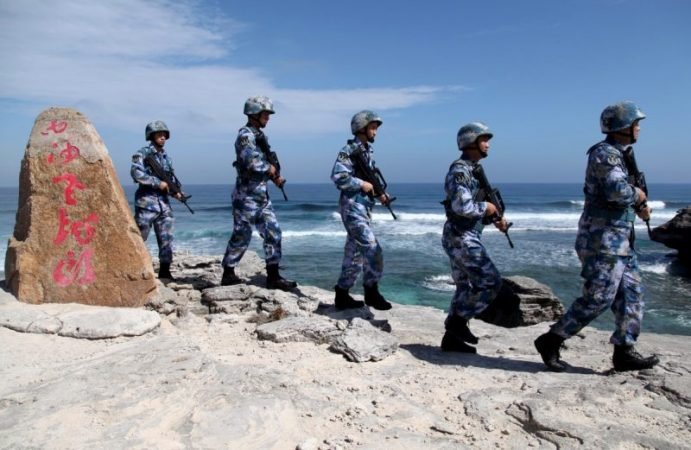 The China–Philippines relationship dates back several centuries and has been predominantly warm and cordial. However, in recent years, with China’s growing assertiveness in the South China Sea, the relationship between these two countries has deteriorated. In the past decade, territorial disputes in the West Philippine Sea have escalated, causing a rift between the two countries. Beijing and Manila both claim their rights over certain maritime areas and reefs in the Sea. The recent area in question, the boomerang-shaped Whitsun Reef, located in the northeast extreme of the Union Banks in the Spratly Islands, is the largest reef of the Union Banks, and comes under The Philippines Exclusive Economic Zone (EEZ), as given in the UNCLOS III. However, China claims historical rights over the area with its ‘nine-dash line demarcation’. The demarcation made by the said line gives China the rights over virtually 90 per cent of the South China Sea, which is one of the most resource-abundant maritime areas in the world. One-third of the world’s global trade travels through the South China sea annually.

In a 2016 United Nations Convention on the Law of the Sea (UNCLOS) arbitral tribunal ruling, China’s ‘nine-dash line’ claim to the sovereignty of nearly the entire South China Sea was rejected, for the reason that it does not align with the UNCLOS Convention.

In the most recent development, which came in March and April, the China – Philippine dispute made international headlines as more than 220 ships were docked in the Philippines’ territorial waters. Photos released by the Philippines Coast Guard displayed an array of ships bearing the PRC’s flag, moored at the Whitsun Reef. Philippine Defense Minister Lorenzana, accusing China of militarizing the area asked the Chinese to immediately recall the ships encroaching their sovereign territory. China, in response, played down the claims saying that the ships were not armed with militia but rather just fishing fleets trying to avoid bad sea weather. However, taking into account China’s record of aggressive expansionist approaches in its surrounding region, it becomes hard to believe that over 200 ships were just sitting in the waters to avoid ‘bad weather.

Although the Philippine Prime Minister, Rodrigo Duterte, is known to have a soft approach against China, the opposition leaders are constantly worried about the country’s sovereignty and openly condemn China’s constant encroachment in their EEZs. The Philippine Coast Guard has also not shied away from taking a hard stance against the Chinese practices.

Though the Chinese ships dispersed from Whitsun Reef in April, hundreds of Chinese vessels remained within or near the Philippines’ EEZ during May. According to counts, over 200 ships remained in the area, mainly clustered at Hughes Reef and Gaven Reef, with a few still at Whitsun. Observers are of the view that these vessels are likely the same Chinese Maritime Militia vessels that left Whitsun Reef last month.

The Philippines is following diplomatic tactics to drive away from the Chinese from their region. However, they know that the encroacher is strong and merely pleads and protests would not be sufficient to drive China away. Keeping the brewing tensions in mind, the Philippines has begun its planning to convert an island in the South China Sea into a military hub. Located deep in the centre of the South China Sea, Thitu Island would serve as the military hub for the archipelagic country and would be used to “sustain patrols in the South China Sea” as well as provide a base for “high-resolution, night-capable cameras to monitor activities around islands claimed by the Philippines.” said Chief General Cirilito Sobejana. The island has a few hundred residents and is already equipped with some military installations.

As tensions rise in the region, international presence in the South China Sea becomes essential to neutralize Sino dominance. The ASEAN countries, which are directly affected by China’s presence in the region, discussed maritime security in the ASEAN Defense Ministers’ Meeting (ADMM), held earlier this month. Participants also raised concerns about China’s new coast guard law, which will allow Chinese maritime-enforcing fleets to use small arms, such as rifles, or shipborne weapons such as deck-mounted guns, when handling foreign ships infringing upon waters that China claims as its own. This law is not only a huge contradiction of the UNCLOS but also ambiguous because China’s demarcation of its territory in the South China sea is the Nine-Dash Line, which is not internationally accepted. The American vision for the Indo-Pacific highlights the importance of allies and hopes to deploy a multilateral approach to combat security challenges in the region. The U.S. military has an increased presence in the region and is conducting 40 per cent more aerial reconnaissance missions as compared to the previous year.

In 2020, when China sank a Vietnamese fishing vessel and disrupted Malaysian oil exploration, the U.S. sent out aircraft and military vessels to take a close look at the situation. The US is freely navigating in areas that China claims as its own, which has given rise to heated debates between the two powers. In recent months, the Pentagon has decided to direct its focus on China, as the latter deploys more military vessels in its man-made structures in the Spratly Islands. Japan has allied with the US for ensuring peace and stability in the Taiwan Strait. The EU, as well, taking a strong stance against China’s actions in the hotly disputed sea, in some sense mirrors the US policy towards the region. The EU countries acknowledge the need for European presence in the Indo-Pacific, and deployments from European countries could soon be expected in the region.

China’s aggressive expansionist policy and sheer disregard for International treaties and Organizations prove to be harmful to countries in and beyond its vicinity. The South China Sea is a crucial area for both trade and natural resources and this region must not be monopolized. China’s aspirations to claim 90 per cent of this geopolitical area require urgent and sustained efforts from the world. Beijing’s new Coast Guard Law has been formulated to legitimize the anticipated Sino-violence in the region, and it wouldn’t be wrong to say that China would use this very law to justify itself in the international forums. China’s rapid building and heavy patrolling of the area cannot be curbed only by the country whom it affects the most at a given time. Until international support is extended, China’s presence in Indo-Pacific will only grow.