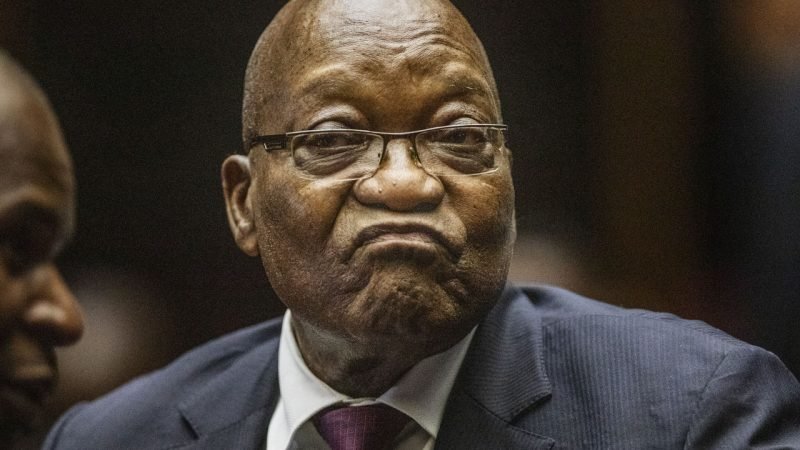 South Africa’s former president Jacob Zuma, ordered to surrender himself to start a 15-month jail term for contempt, said Sunday he would not be doing so by the court-set deadline.

“No need for me to go to jail today,” he told journalists at his Nkandla homestead in Kwa-Zulu Natal province, where hundreds of his supporters are camped outside in solidarity.

“They cannot accept papers and expect me to go to jail,” he said, referring to his legal challenge of the sentence.

“Sending me to jail during the height of a pandemic, at my age, is the same as sentencing me to death,” he added.

Earlier, the former president, 79, had told supporters his “constitutional rights were abused” by judges of the country’s constitutional court.

He and his legal team had written to the court to plead their case that the sentencing had been wrong, in a bid to either reduce it our strike it out entirely, he added.

He led supporters in a rendition of the anti-apartheid song “Umshini Wami” (Bring Me My Machine Gun), which has become his signature tune.

Zuma’s supporters have vowed to render South Africa ungovernable if he is jailed.

Zuma was sentenced to the jail term for contempt of court on Tuesday after he repeatedly refused to appear before corruption investigators to give evidence.

The investigating committee set up in 2018 to look into allegations of corruption against the former president has already heard from around 40 witnesses.

The court gave him five days to surrender to the authorities, which made the deadline Sunday.

The South African court nonetheless agreed to hear his legal challenge to rescind the order, and that hearing will take place on July 12.

In a show of force, loyalists clad in their African National Congress (ANC) regalia have been outside their embattled leader’s home for weeks.

Vowing to protect Zuma, the protesters called for President Cyril Ramaphosa to step down.

“We are here to say Ramaphosa must step down. Must step down”, a visibly angry loyalist said. “As from Monday we will make the country ungovernable.”

Police, under orders to arrest Zuma if necessary, were stationed across the province on Sunday to control the crowds descending on Nkandla.

Now that he has said he will not turn himself in, police have a further three days to arrest him.

“He probably won’t be jailed by Wednesday, but I can’t see him being charged twice with defying an order of court,” said constitutional expert Lawson Naidoo.

But he added: “If they don’t (arrest Zuma) South Africa will be and can be considered a failed state, in which the rule of law does not apply and does not matter.”

“This is embarrassing for the country and this thing is happening simply because there is a threat of political instability,” he told AFP.

“His power is fading nevertheless,” Mathekga added. “Zuma is a politician of yesterday.”

Some fear the ruling ANC could face a serious political crisis between those who back Zuma and others loyal to Ramaphosa, who has campaigned on a pledge to fight corruption.

Over the weekend, the ruling ANC sent representatives to speak with Zuma at his home, which was renovated while he was president at a cost of around 20 million euros ($24 million) to the taxpayer.

The party cancelled a meeting of its National Executive Committee (NEC) citing the unresolved situation in Kwazulu-Natal.

As well as the committee investigating him, Zuma has also been accused of involvement in a bribery affair dating back more than 20 years.

He faces 16 charges of fraud, graft and racketeering relating to a 1999 purchase of fighter jets, patrol boats and military gear from five European arms firms for 30 billion rand, then the equivalent of nearly $5 billion.