Friends to Foe: Deteriorating Relations between Australia and China in recent times 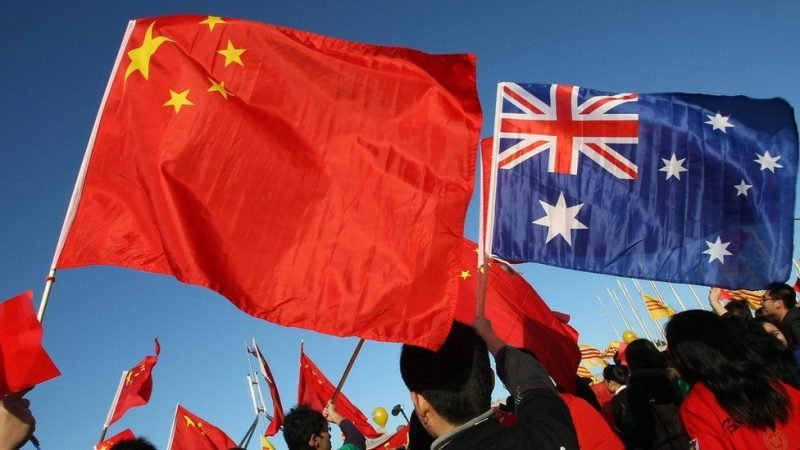 Australia and China had a growing relationship over the year. In fact, China is Australia’s largest trading partner and accounts for 39 percent of exports which are mainly from iron core and 27 percent of imports between 2019- 2020 according to Australian Bureau of Statistics. The bilateral relations took a slump in 1996 when Australia due to its interest with the United States increased its interaction with Taiwan prompting Beijing to respect its One China Policy. Apart from the rare occurrence and few other incidents, both countries have maintained a steady relationship over the years until 2020, when Australia demanded for an inquiry into China’s alleged role in Covid19. This angered Beijing and it retaliated by imposing heaving sanctions on imports such as Barley, Wine etc. Wine exports fell to almost 95 percent. In fact, Beijing will impose 200 percent of tariffs on Australian Wine causing the already strained industry to suffer more. (Schaffer, 2021)

While experts believe that the crack between the two countries aroused due to latter’s demand for inquiry of Covid19, it can be easily said that the seeds of distrust between the nations arose way back in 2017, the repercussions of which are being felt today more than ever. Way back in 2017, Australian Security Intelligence Organization warned Canberra of growing influence of Chinese businessman into Australian Politics. Later that year, Australian government under Prime Minister Malcom Turnbull proposed laws to curb foreign interference in politics. The Chinese embassy in Australia remarked that the statement will hurt the relations. (Khalil, BBC News, 2020)

In 2018, Australian government passed the foreign interference laws under which the lobbyist of the foreign country has to register them as a public register. This angered Beijing resulting in freezing of diplomatic visits. The already strained relationship suffered a major setback when Australia became the first country to ban Huawei and ZTE from being involved in the rollout of its 5G networks. While Australia claimed that the ban is owing to security reasons, China responded by saying that the ban is discriminatory and on the pretext of United States, which blacklisted Huawei a week before. (Schaffer, 2021)

While it was believed that the relations will not get any severe and will improve, Australia in 2020 cancelled two MOUs signed by the state of Victoria under China’s Belt and Road Initiative. This was done in response to the legislation which allowed veto powers over foreign arrangements by States, local bodies and universities in a broad range of sectors such as infrastructure, trade cooperation, tourism, cultural collaboration, science. Though Australia said that these MOUs were inconsistent with Australia’s Foreign Policy and were comprising the foreign relations with another nation. The Chinese Embassy in Australia expressed displeasure and said that it is a discriminatory behavior by the Australia government on pretext of United States, its major ally (Wadhwa, 2021)

China on its official twitter account posted an image of an Australian soldier murdering an Afghan child sparkling a widespread controversy. The Australian Defense Forces or the ADF denied those allegations though some credible evidence of unlawful killings by the ADF elite units. Prime Minister Scott Morrison referred to China’s act as outrageous, offensive. As was expected, China’s spokesperson said that these acts shows the hypocrisy regarding human rights by the West. Australia in return demanded an apology from China for the’ fake’ image it posted which led to the relations going to an all-time low. (Khalil, BBC News, 2020)

The increasing crack between the two countries soon became a major rift as China in 2021 detained writer Yang Jun and journalist Cheng lei. Cheng an anchor for English broadcaster has been detained on account of passing sensitive information overseas which hampered China’s national security. This was seen majorly as a retaliation by China against Australia after the latter arrested Sanh Duong, who is the president of Oceania Federation of Chinese Organization. This was done after a yearlong federal investigation by the Australian Security Intelligence Organization who were observing Duong’s relationship with a foreign intelligence agency. (Wadhwa, 2021)

China and Australia have been on face to face on a number of issues such as issue of Doctored image where Australian troops were accused of War Crimes in Afghanistan, Stance of Australia on South China Sea, Hong Kong and Uighurs Muslims.

It will be true to say that the Sino Australian relations have reached its worst in decades. It will be difficult for both nations to stabilize relations as before due to a number of issues pending between them which nobody is ready to compromise or improve.  China and Australia can have a stable relationship only if it has a steady relationship with United States. Only then China and Australia can solve their issue but until then the tit for tat battle between them will keep on going causing a sense of tension in the Asia Pacific region

Mridul Jha is an incoming MBA Candidate at IFMR GSB, Krea University Batch of 2021- 2023. With a strong interest in international relations, he has written for JIA SIPA, Columbia University, New York.