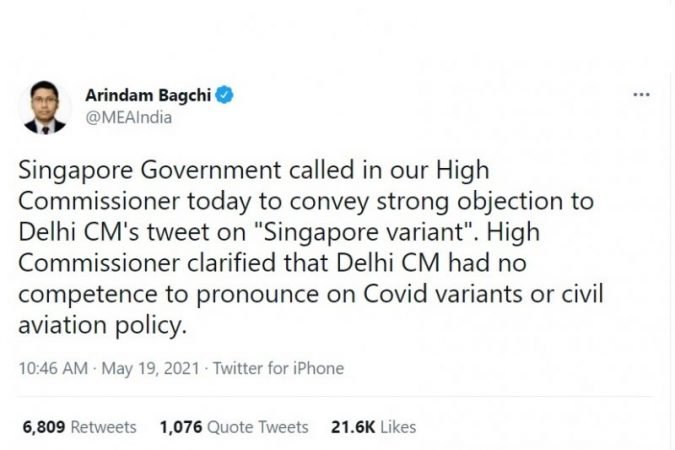 Amid the ongoing second wave, political confusion between India and Singapore emerged. The centre of all confusion began when New Delhi Chief Minister Arvind Kejriwal tweeted mentioning how the ‘Singapore variant’ has an adverse effect on children. The tweet also came as a suggestion to the Centre that suspension of flights between India and Singapore be halted with immediate effect. However, the tweet was not seen in a positive light and Singapore called it out as the High Commissioner of India was summoned. The summon came as an outright reaction of Singapore to object to the statements made by CM Kejriwal.

The Foreign Minister of Singapore Vivian Balakrishnan took to Twitter and responded to Kejriwal’s tweet stating that politicians must stick to facts as there has been no trace of any ‘Singapore variant’. The Ministry of Health in Singapore slammed media reports saying that traces of Indian variant are found in the country rather than how the scenario is being presented. A statement released by the Singapore Health Ministry read, “There is no truth whatsoever in the assertions…There is no Singapore variant. The strain that is prevalent in many of the COVID-19 cases in a recent week is B.1.617.2 variant, which originated in India. Phylogenetic testing has shown this B.1.617.2 variant be associated with several clusters in Singapore.”

With the summoning of the Indian High Commissioner in Singapore, EAM Jaishankar also shared his concerns over the diplomatic disorientation. He said, “Singapore and India have been solid partners in the fight against COVID-19. Appreciate Singapore’s role as logistics hub and oxygen supplier.

Their gesture of deploying military aircraft to help us speaks of our exceptional relationship. However, irresponsible comments from those who should know better can damage long-standing partnerships. So let me clarify-Delhi CM does not speak for India.” As much as it had a cold undertone for the Delhi CM, this reprimanding was necessary as India and Singapore have shared a warm and cordial relation over time.

The scenario presented to the world is confusing and stressful, however, it is equally important to remember that the pandemic is not the issue of one particular country and therefore calls for humanism over anything. As Balakrishnan stated, “Nobody is safe until everyone is safe,”; this motto must be accepted and take precedence.