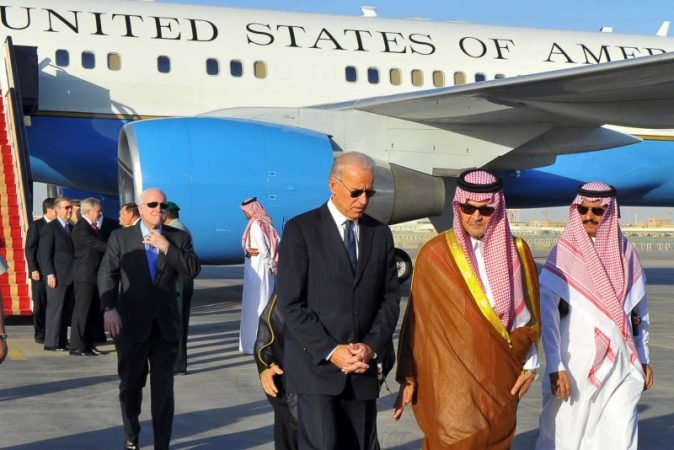 In a recent interview with a local television outlet, Saudi Crown Prince Mohammed bin Salman (popularly known by the initials, MbS) expressed Riyadh’s desire to have “a good and distinguished relationship with Iran.” It was only three years ago MbS said in another interview that Iranian Supreme Leader Ayatollah Ali Khamenei “makes Hitler look good,” indicating no prospects for a dialogue with the “evil” Iranian regime. MbS’s drastic change in tone towards Iran is undeniably an outcome of President Joe Biden’s attempts to recalibrate the US policy towards Saudi Arabia, the oil-rich kingdom in West Asia.

In his first major foreign policy speech on February 04, 2021, President Biden announced the withdrawal of the US support to the Saudi-led offensive operations against the Iranian-backed Houthis in Yemen, including “relevant arms sales.” This move came a week after the Biden administration decided to temporarily freeze and review the weapons transactions with Saudi Arabia and the United Arab Emirates authorized by former President Donald Trump.

Riyadh heavily relies on sophisticated weapons from the United States since the prolonged Yemeni civil war in 2014. According to the Stockholm International Peace Research Institute, Saudi Arabia is the world’s largest arms importer between 2015 and 2019, with 73 percent from the United States. But Biden, stating that military force is not an answer to West Asia’s challenges in the Interim National Security Strategic Guidance, expressed his unwillingness to give a “blank check” to its partners in the region, taking a jab at Riyadh.

Saudi Arabia’s human rights record also came under Biden’s scrutiny. In another blow to Riyadh, the Biden administration declassified a US intelligence report on February 26, 2021, that states MbS approved the murder of exiled Saudi journalist Jamal Khashoggi inside the Saudi consulate located in the Turkish city of Istanbul in 2018. Soon the US Secretary of State Antony Blinken announced “the Khashoggi Ban,” imposing visa restrictions on 76 Saudi individuals, but not on the crown prince. Biden, in an interview, defended his administration’s inaction against MbS by stating that it was diplomatically unprecedented to punish the “acting head of state” of a country in alliance with the United States. However, in his telephonic conversation with MbS’s father, King Salman bin Abdulaziz, Biden “affirmed the importance the United States places on universal human rights and the rule of law.”

Biden also hopes to revive the Obama-era Joint Comprehensive Plan of Action (JCPOA), or the Iranian nuclear deal, that his predecessor Trump scrapped three years ago. Trump was highly critical of the Iranian regime, whom he identified as “the leading sponsor of terror,” and imposed economic sanctions and other punitive measures against it. His hostility was also an attempt to appease its two regional allies, Saudi Arabia and Israel, who look at Shi’ite Iran as a threat to their existence. After Biden took charge in the White House, the United States joined the Vienna talks to reinstate the JCPOA. Biden, formerly the US Vice President in the Obama administration, sees a strong accord with Iran, and not sanctions, as a solution to deter Tehran’s nuclear ambitions.

The realignment in US policy towards Saudi Arabia came at a time when the United States did not import any Saudi crude oil for the first time in 35 years. Since President Franklin D. Roosevelt’s historic meeting with King Abdulaziz ibn Saud in 1945, the US energy interests in the Arabian soil was the cornerstone to the US-Saudi relations. The United States was committed to the Saudi kingdom’s security, heavily investing in military and diplomacy for ensuring an uninterrupted supply of oil and gas to the US markets. With the declining reliance on energy supplies from Saudi Arabia and other West Asian countries, the United States is longer keen to station its troops in the region. Meanwhile, the rise of assertive China in the Indo-Pacific also compels Washington to shift its military focus from West Asia.

President Trump gave a ‘blank check’ to Saudi Arabia – he backed Riyadh’s military adventurism in Yemen, ignored its human rights record, and pursued maximum pressure tactics on its arch-rival Iran. But President Biden chose to withdraw that blank check, which baffled the Saudi kingdom. After the United States released its intelligence report on the Khashoggi murder, the Saudi Foreign Ministry rejected “negative, false and unacceptable assessment” of the kingdom’s leadership. The Saudi media outlets claimed it as an attempt by “western leftist groups” to tarnish the image of MbS and his Vision 2030 reforms.

However, with the US security apparatus no longer at its disposal, Riyadh understands the need for diplomacy than coercion in West Asia. Earlier in January 2021, Saudi Arabia and Qatar had agreed to resume full diplomatic relations during the Gulf Cooperation Council summit in the Saudi heritage city of Al Ula, ending the Saudi-Qatari estrangement since 2017. Riyadh understood that the Qatar blockade, an end product of intra-Sunni rivalry in the region, turned counterproductive as Doha received support from Turkey and Iran.

Riyadh started engaging with Iran through diplomatic channels as the United States withdraws its forces from the region. It also comes from the devastating experience of sophisticated attacks on two Saudi oil installations by Iran in September 2019, costing the kingdom around two billion US dollars. On May 10, 2021, the Iranian Foreign Ministry confirmed that Tehran is holding talks with Riyadh to ease tensions between both countries. There were also reports of Saudi and Iranian officials meeting in Baghdad last month for the first time since Riyadh cut its bilateral ties with Tehran in 2016.

Riyadh has also opened the doors for informal dialogue with Israel. In 2020, the United Arab Emirates and three other Arab countries had normalized their bilateral ties with Israel through the US-brokered Abraham accords, under a silent nod of approval from Saudi Arabia. Riyadh may also follow the path of its fellow Arab countries, but not soon due to the recent escalation in the Israeli-Palestinian conflict. In a nutshell, Biden’s policy towards Saudi Arabia has forced Riyadh to make more friends than foes in West Asia, keeping aside its ideological differences, as they are no longer under the security cover of the United States.