The student opposition infuriates the monarchy in Thailand 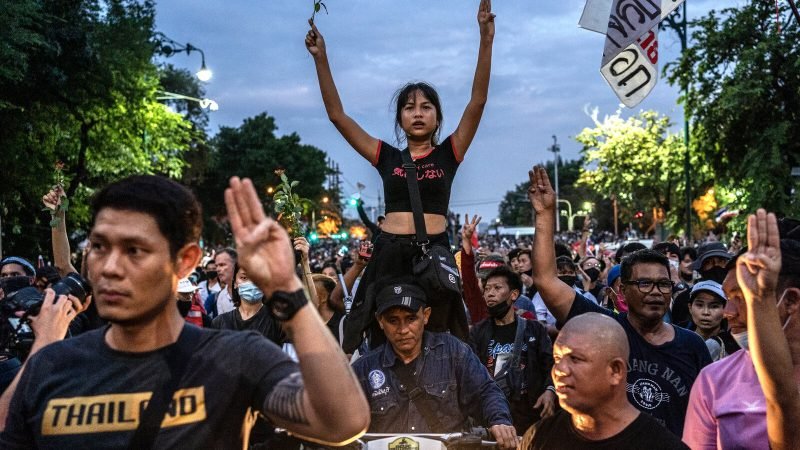 February witnessed the arrest of two key pro-democracy figures in Thailand under the archaic Lèse-majesté law that prohibits anything deemed to be insulting to the monarchy. The law can be traced back to 1908, before the foundation of modern Thailand. Its obdurate content invites frequent prosecution through state authorities. The law’s violation carries an imprisonment term of upto 15 years, often non-bailable. Despite the king proclaiming earlier that the law ought not to be used against any dissidents, the arrests are a clear indicator that the pro-democracy movement is poised to challenge the sacrosanct authority of the monarchy.

The protests’ eruption in March 2020 was instigated by the dissolution of the Future Forward party after the 2019 elections by the Thai Constitutional Court in February last year. Thantahorn, the party’s leader, enjoyed widespread support amongst young Thais and ranked third in general elections. The party’s votes personified the opposition to the military’s reign. The judge that announced the controversial ruling earned himself a seat in the Privy Council, a special board of advisors to the Thai monarchy, after his retirement. One of the three demands raised by the protestors is the reformation of the Thai Monarchy for its encroachment in political affairs and its discreet relationship with the army. Thailand has been subject to thirteen military coups, more than any other country in modern history. The Royal Army, as it is officially called, shares a mutually beneficial relationship with the monarchy in which the monarchy ensures that no changes are enforced upon the army’s internal structure, and the army safeguards monarchy’s reverence and status as the richest monarchy in the world, amassing personal wealth worth USD 43 billion. While the army chiefs have regularly laid claim to political instability before thwarting the ruling party, the army’s succession to power has historically paved the way for the extension of the monarchy’s wealth and power. Current King Maha Vajiralongkorn oversaw the royal budget being increased by 16.8% in 2020 while fellow Thais suffered from unemployment under the military’s reign.

The other two demands of the movement include the dissolution of the parliament and revocation of the military-drafted constitution. Since the military coup in 2014, General Prayuth has presided over the parliament as the Prime Minister and undertaken a constitution rewrite that curtails civil liberties. The erosion of democratic rights accompanied by economic deprivation has resulted in the breakdown of trust between the army and the young Thai populace. While 64% of the workforce occupies menial informal jobs, 67% of all wealth is hoarded by the top 1% in the country. Some analysts point towards the similarities between the great economic depression that preceded Thailand’s first military coup in 1932 and the current movement. However, no social movement in the past has targeted the monarchy. The monarch is veneered as the Buddhist-Hindu divinity that edifies people while protecting their wellbeing and interests. The criticism of the monarch is censured as a social taboo and its subsequent recrimination is not limited to public disgust. According to the Lèse-majesté law, it also mandates 15 years of imprisonment. The current pro-democracy movement is unprecedented, with regards to its numbers, mobilisation strategies and demands.

The students’ movement defies the political divide between monarchy royalists and populist supporters of Thaksin. Yellow and red camps, as they are respectively known, have plagued Thai politics since Thaksin Shinawatra’s electoral victory in 2001. The highly popular leader was eventually ousted by a military coup in 2006 and is presently in exile. His exile was followed by several variants of his party being debarred by the court and a series of violent riots in Bangkok. Future Forward party’s soaring popularity in 2019 is evidence of increasing disillusionment of the people towards the inertia in Thai politics. The party’s disbandment by the court laid rest to any faith that the people had in the political institutions of the country. The current movement is borne out of young people’s resentment towards a state that does not represent their interests. Studies show that 72 percent of Thai graduates could either be unemployed or working in jobs unrelated to their degrees due to automation by 2030.

More than 74% of the Thai population falls below the age of 45. The galvanisation of youth is critical for the movement’s growth. Despite speaking against the monarchy, the student leaders have been tactical about not seeking assistance from any political camp in order to defend the movement’s non-partisanship. Its non-alignment is especially attractive to Thais who have been disgruntled by the political divide and military’s entrenchment into politics. The leaderless mobilisation through social media allows quick gatherings and dispersals across Bangkok. The movement resonates with the youth, not just in its interests but also in its approaches. Figures of pop-culture have been adopted as resistance symbols, most notable is the three-fingered salute of the Hunger Games that has been legally prohibited by the government due to its widespread use in protests. While protests are politically charged, they also feature a variety of local food vendors and Harry Potter costumes. In November, an inflatable life-size duck’s image from the protest amassed tremendous popularity on social media. The image showed the duck shielding protestors from water canons, all while retaining its smile.

The musical dissident group of Rap Against Dictatorship has gathered millions of views on youtube for their anti-establishment songs. Their songs decry the military’s harassment of its critics and call people into action on the streets. Their song ‘Reform’ addresses the movement’s demand to reform the monarchy which provoked the military to restrict the music video’s availability in Thailand. Internationally, however, the group has received wide acclaim for the peaceful yet powerful mode of resistance. The collective often performs at protest locations with other artists. To someone who is unaware of Thai politics or the Thai language, it would not be unreasonable to misconstrue the protests as a carnival.

However, it would be uncharitable to the Thai youth to reduce their dissent as a vogue fad. Despite a military crackdown on student leaders and employment of increasingly extreme crowd dispersal methods like water canons, young people have been flooding the streets to mark their presence. The leader of Rap Against Dictatorship has been arrested for sedition and many activists under exile have died. The backlash from the royalists threatens to delegitimise the movement as an attempt to destabilize the country. While it remains uncertain how the monarchy will respond to the fiercest threat in its history, the pro-democracy movement in Thailand serves as a lesson in crowd mobilisation for movements under authoritarian regimes.

Shubhankar Kashyap is a student of Political Science at Ramjas college, Delhi University.