Reflections on the Tibetan Election 2021: The fate of the Tibetans in-exile 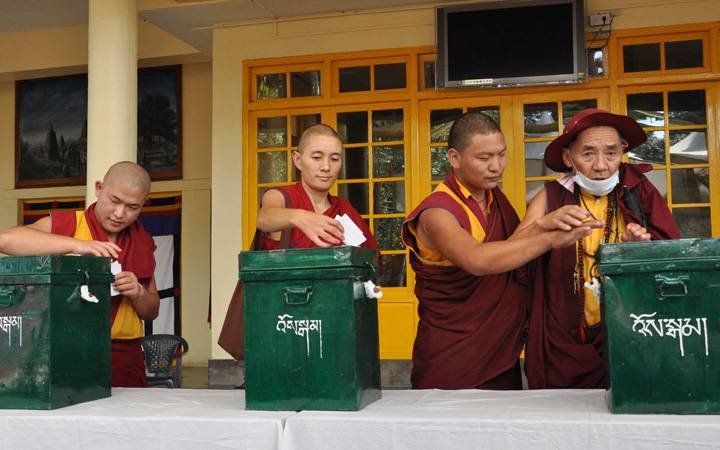 Tibetans in exile went to the polls recently to elect their political leader and parliament members. With Tibetan population spread across 26 countries around the world, this democratic exercise, led by Central Tibetan Administration’s Election Commission, is a huge logistical undertaking, especially given the global Covid situation.

Mr. Tenzin Kunga, a London based freelance researcher and Research Assistant to the Editor of Asian Affairs, joined in a conversation with The Kootneeti to share the experiences and aspirations of the Tibetan diaspora.

Arijita: The elections of the Tibetan Government have begun and is now in the final phase. Given the polling opinion do you sense a change in the pattern of voting compared to previous years?

Tenzin Kunga: The Tibetans in exile recently voted to elect their Sikyong (political leader) and 45 members to the 17th Tibetan Parliament-in-exile. More than 80,000 Tibetans registered to vote out of which an estimated 70% participated in the final election on 10/11 April 2021. The Tibetans vote for a candidate based on their public service record and also based on the promises made in their election manifesto/campaign speech. The Tibetan Election Commission, headquartered in Dharamshala, India, will declare the final election results on 14th May 2021 when the newly elected Sikyong will be officially declared, along with 45 members elected to the 17th Tibetan Parliament-in-exile. The three traditional provinces of Tibet (U-Tsang, Dhotoe and Dhomey) are equally represented in the parliament and so are the four principal schools of Tibetan Buddhism and Bon as well as the exile constituents in Europe, North America, and East Asia plus Australasia. Their official tenure is five years starting from the day they take oath of office. I do not sense a major change in the voting pattern compared to that in the previous election.

Arijita: Reports have it that even in the last leg of the elections the Tibetan people have voted for India based Central Tibetan Administration of the Tibetan government in exile. How do you feel that reflects the aspirations of the Tibetan refugees?

Tenzin Kunga: Only about 120,000 of Tibet’s total population of 6 million are in exile. More than 90% Tibetans are still inside Tibet, living under the oppressive Chinese regime. The Chinese government continues to deny basic rights to the Tibetans inside Tibet. It is engaged in a systematic effort to eliminate the distinct religious linguistic and cultural identity of the Tibetan people. This election is for the India-based Central Tibetan Administration (Tibetan government-in-exile) only, not for any office/post in Tibet. The Central Tibetan Administration represents the struggle of Tibetans inside Tibet and affirms “Restoring freedom for Tibetans is the primordial goal of the Central Tibetan Administration, which is the legal and historical continuation of the legitimate government of Tibet under the leadership of His Holiness the Dalai Lama.” Our participation in this election shows our commitment to democracy, rule of law and freedom.

Arijita: Will the recent developments around the election cause tensions between India and China, given the large number of supporters residing here?

Tenzin Kunga: The Government of India and the Indian people have always been supportive of the rehabilitation of Tibetans in exile. His Holiness the Dalai Lama is considered as an honoured guest by India. As far as your question is concerned, the Chinese government has never been happy that India has provided refuge to His Holiness the Dalai Lama and for allowing the Central Tibetan Administration, which China does not recognise, to function on its soil. China is also not happy that India is allowing the Tibetans in India to participate in the democratic process such as this election. The Chinese government understand that the Tibetans in exile unite and rally around the CTA to continue their struggle for a free Tibet. They want the Tibet question to disappear and go away. However, as long as His Holiness the Dalai Lama is there to guide us, and as long as Tibetans inside Tibet and outside continue their lively resistance led by the CTA, the struggle will continue. We are thankful to the government and people of India for their unwavering support.

Arijita: There is again a section of the populace in New Delhi which are not satisfied with the Indian policy towards China. Do you feel that in this battle between the Tibetan people and China, India as a third party can altercate the future of the people?

Tenzin Kunga: We, Tibetans, are ever grateful to India for its humanitarian support. As far as the political support is concerned, I feel that India can do more. Allow me to explain this with an example. The border issue between India and China which took place last year, has been a thorny and a sensitive issue. India was forced to deploy a lot of resources to the border, which otherwise could have been used more productively elsewhere such as on education and on health. However, this happened because China is there right next to India. This was not the case prior to 1950, because Tibet was then an independent country and the present-day border line was very peaceful. Ever since the illegal Chinese occupation of Tibet, the border scenario changed and there is a constant threat to India from China.

We, feel India can play a vital role in facilitating meaningful dialogue between the Chinese government and representatives of His Holiness the Dalai Lama to peacefully settle the question of Tibet. The Central Tibetan Administration advocates the Middle Way Policy to secure genuine and meaningful autonomy, as enshrined in the Chinese constitution that enables Tibetans to maintain their distinct national identity, including their language, culture, religion, values and way of life. Resolving the Sino-Tibetan conflict this way with Tibet as a peaceful buffer between Asia’s two major powers will bring lasting peace to the entire region.

Arijita: Lastly, what is your take on India’s position in this chaos between the Tibetan people and China? Do you see this as more of a democracy versus communism?

We Tibetans in-exile did not have to fight for democracy and on the other hand, His Holiness the Dalai Lama, our beloved leader has very graciously introduced the concept of democracy to the Tibetans in-exile. We have worked on the democratic process and we have been able to practice democratic ideals. The successful completion and huge turnout in the Tibetan Election of 2021 reflects the vibrancy of the Tibetan democracy in exile. We are not demonstrating this to challenge the communism in China. Our position is to restore freedom for Tibetans inside Tibet. Therefore, I do not see this as a democracy vs communism.