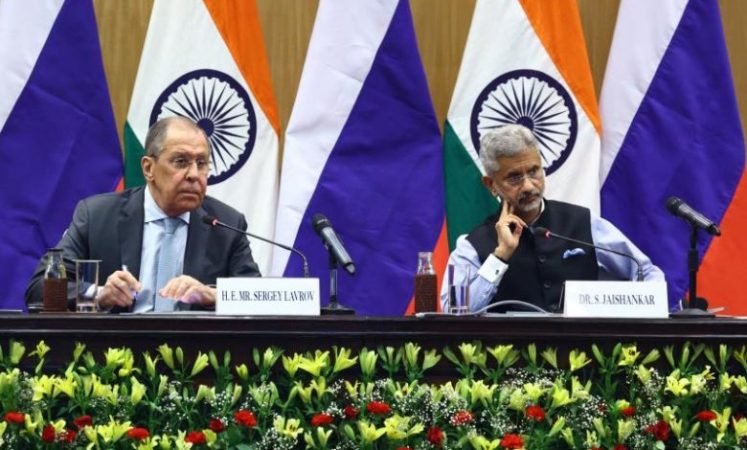 The Russian Foreign Minister Sergey Lavrov visited India as part of his Asian Tour, for a two-day bilateral visit. The visit included a brief discussion on the current status of the bilateral relations with a special focus on the recent QUAD summit. Russia’s close relations with India has proved to counteract the QUAD group and was a focal point especially as Russia and U.S relations have hit rock bottom. The two leaders, Sergey Lavrov and Indian External Affairs Minister S. Jaishankar reviewed the bilateral ties and the economic cooperation between New Delhi and Moscow. The two also discussed the expected visit of Russian President Vladimir Putin later this year for the postponed Russia-India Annual Summit which was delayed for the first time in nearly 2 decades.

Sergey Lavrov also met the US Presidential Special Envoy for Climate, John Kerry. John Kerry is currently staying in New Delhi, for his groundwork and research ahead of the U.S Climate Summit. India’s BRICS chairmanship was also discussed as the country is expected to host the BRICS summit’21.

In the meantime, certain complexities cannot be ignored. Russia is strengthening its military relations with China. Since both India and China have shared tensions along the Line of Actual Control (LAC), it is difficult to determine Russia’s take on it. Unlike the US, which was quick to respond to the tensions, the same does not apply to India’s natural ally. With India not being invited to the Afghan discussion, there are still many ramifications left to be thought of.  Moscow’s friendly ties with Beijing and India’s expected dependency on Moscow for armed weapons might act as a major drawback in the long run, given that post-Galwan valley dispute, India-China relations are at an all-time low now. Despite the joint efforts being put together by the two countries, the tensions are yet being sensed.

Russian Foreign Minister Sergey Lavrov said, “Our talks were constructive and confident, our relationship does not change with world fluctuation. We focussed on the content of the bilateral meet. We are going to build up the investment which reduced due to COVID, Exploration of space, President Putin’s message to PM. Working on trade is one of the priorities. We hope to launch the possible talks on Free trade. On defence technology our discussion happened, we respect India diversified interest in military technology. India’s EAM today after the press conference.

S. Jaishankar further added that both the countries have an “appetite for investment” in each other. He added, “We spoke of connectivity including the International North-South Transport Corridor and Chennai-Vladivostok Maritime Corridor.” Russian Foreign Minister’s visit to India comes after Indian Foreign Secretary Harsh V. Shringla visited Russia in February 2021. It was said that the topics of discussion mainly focused on special and privileged strategic partnership plans. They also discussed certain regional and international issues.

After China and India, Sergey Lavrov is now in Pakistan, he will be there till 9th April as a part of his Asian Tour. It is the first time in nine years that a Russian designatory is visiting Pakistan to discuss issues related to counterterrorism, economic cooperation, along the Afghanistan issue. The outcome of his visit is detrimental to redefine stability for India-Russia relations.