Myanmar and the 2021 Spring revolution 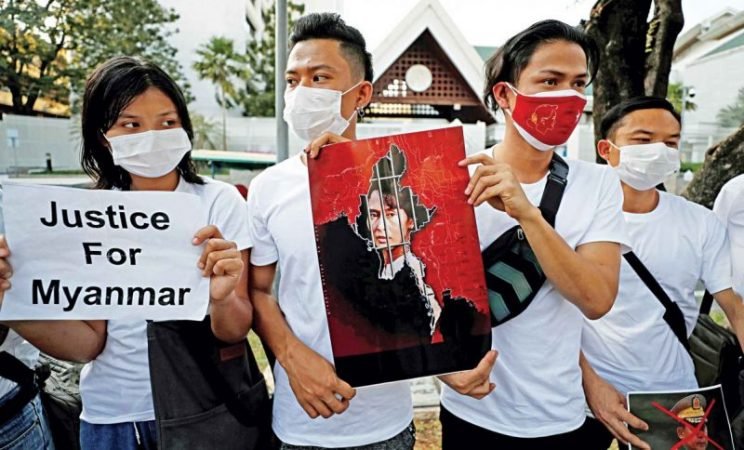 Myanmar is yet again facing a coup headed by the Military commander-in-chief Min Aung Hlaing. The coup took place after the new session of parliament was set to open. On the 1st of February the Military forces seized control following a general election which Aung San Suu Kyi’s National League for Democracy (NLD) party won with the majority votes, her party won 396 out of 476 seats in the parliament, an even larger margin of victory than the 2015 elections. The army disagreed with the results and claimed them to be unlawful but a few days before the coup the civilian-appointed Union Election Commission rejected the army’s claim of voter fraud.

The Elected leader Suu Kyi and members of her party including Kyi Toe, NLD’s main spokesmen are among those detained, the army also detained the 3 Buddhist monks namely Ashin Ariya Vansa Bivansa (Myawaddy Sayadaw), Ashin Sobitha, and Shwe Nya War, who previously led the 2007 Saffron Revolution. While the coup continues the people of the country are strongly protesting against the military rule. The coup can be seen and regarded as one of the prime steps towards restoring the faith of people in democracy and what it means. While the protest continues in Myanmar many people are escaping to their neighbouring countries like Thailand and India.

The Assistance Association for Political Prisoners (AAPP) said, “the people across Burma continued striking for the end of dictatorship, for democracy and human rights”. According to AAPP- a Thailand-based non-for-profit organization that is very closely monitoring the coup said that the death count had risen to 557, as of late Sunday. The protestors carried out a mass protest against the military coup on Easter Sunday, they condemned the military rule by engraving quotes on the Eggs like ‘Get Out MAH’ (Min Aung Hlaing) ‘Spring Revolution’ and ‘We Must Win’ along with placards calling for the release of Suu Kyi.

The country at present is witnessing protests in the forms of civil disobedience, labour strikes, a military boycott campaign, a pot-banging movement, a red ribbon campaign, public protests. The protest also saw the return of what is called the ‘three-finger salute’ after a year. The 2021 Myanmar Coup reminds us of one of the most defining moments in Myanmar History which started because of the unhappiness from the socialist system in Myanmar in 1998. The 1998 uprising ended with the installation of notionally civilian leaders; the 2021 coup should end with the restoration of human rights in the country.

On the 4th of February, the military chief ordered the immediate ban on Facebook – Social networking service company till the 7th of February. While the state-owned carriers blocked WhatsApp, Instagram, and Facebook, the privately-owned carriers only blocked Facebook. The ban was ordered after it was being used to organize civil disobedience protests in the country. During the ban, the people of the country took it to Twitter and supported the protests by using hashtags like #RespectOurVotes, #SaveMyanmar. After this incident, Twitter and Instagram both were banned from public usage to maintain peace in the country. The ban was again imposed for 20 days starting from the 14th of February 2021. While the coup continues in the country the world leaders are expressing their views about the coup, some countries like the United States, the United Kingdom, Nepal are strongly condemning the coup while others including India, China, and Bangladesh have encouraged immediate discussion between the military and government officials regarding the crisis. India’s decision to sealing the Myanmar border areas and its unwillingness to take a firm stand can be linked to its concerns about the Myanmar military involving China as its metal plaque. Even though India was among the eight nations that participated in the military parade, it is still silent.