India’s concern as the Dragon lurks near ceylon 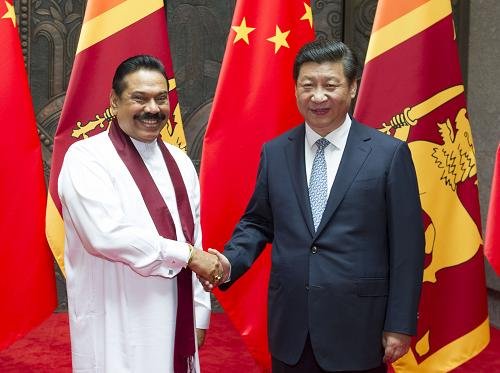 The Ministry of External Affairs on Thursday, 17th June said that it is closely following the Beijing-backed developments taking place in the Indian Ocean. The Sri Lankan Port City is merely 300 kilometres away from the Indian coastline, and with India’s primary adversary lurking in its surrounding ocean, safety and security become a primary concern.  Arindam Bagchi, the official MEA Spokesperson, on Thursday in a weekly media briefing said that the ministry is aware and has made note of the concerns being raised in the island nation regarding certain aspects of the framework of the Colombo Port City project, and expects that “Sri Lanka will remain mindful of our (India and Sri Lanka’s) excellent bilateral cooperation, including mutual security in our shared environment, which includes the maritime domain”.

The China-backed Sri Lankan Port City is a $1.4 Billion project and is a part of Jinping’s dream Belt and Road Initiative (BRI).  It is also the single largest private sector development in Sri Lanka, by the CHEC Port City Colombo Company; a unit of China Communications Constructions Company. This project is said to act as an impetus to revive the Sri Lankan economy, will attract investments worth $15 Billion, and will generate 200,000 employment opportunities for locals. Built on reclaimed land adjoining the port of Colombo, the Port City will consist of an integrated resort, casino, conference centre, marina, residential developments, financial zones, and lush green spaces. The city in itself sounds like an attractive commercial opportunity, but the catch here is that in return for building the Port City, China has acquired the right to use 62 hectares of this land on a 99-year lease.

Last month, following two days of debates, a majority of 149 passed the controversial Colombo Port City Economic Commission bill in the 255-member Sri Lankan parliament. The bill, now an Act, gives the port an SEZ (Special Economic Zone) status and will allow for the installation of a powerful economic commission, which will have the autonomy to make laws and govern the area. The bill faced stiff resistance from the opposition leaders, who believe that the development could become a virtual Chinese outpost and injure the sovereignty of the island nation. However, the Rajapaksa brothers, who are known to have a soft spot for China, see this project as a means to revive Sri Lanka’s pandemic-hit economy.

These controversies and concerns surrounding the development of The Port City are not just limited to Sri Lanka. With Chinese presence in the Indian Ocean, India needs to have a reaction plan in place just in case things go down south, owing to the volatile nature of the Sino-Indian relationship. India is aware of China’s attempts of swaying away its neighbouring island nation and is trying its best to recalibrate relations with the latter. On Wednesday, 16th June, India extended an agreement for a $100-million loan from the Export-Import Bank of India (EXIM) for building projects in the island’s Solar Energy Sector. This is the first agreement that has come into effect between the two countries since February 2021, when Sri Lanka scrapped off the East Container Terminal (ECT), which was part of a tripartite agreement between India, Japan, and Sri Lanka. Although India was handed the West Container Terminal (WCT) in place of the former ECT, it is less developed and will be managed in a government-private partnership with the Adani group as opposed to the initial government-government partnership.

With the Hambantota port already under China’s control (a 99-year lease was signed between Sri Lanka and China Merchants Port Holdings Company Ltd.), the novel Port City will give China a vantage position in the Indo-Pacific. Sri Lanka enjoys a strategic position in the Indian Ocean is surrounded by the world’s most dense trade routes. With Chinese presence in these areas, a security threat arises for China’s adversaries in terms of their imports and exports. The detection of PLA Navy (People’s Liberation Army, Navy) ships patrolling in the Indian Ocean is not new, and with China’s access to two major ports in Sri Lanka, a strong deployment of PLA Navy in this area would not come as a surprise. India’s expectations of Sri Lanka being ‘mindful’ of their relationship, and ensuring security is regarding India’s growing concern regarding the Chinese presence near its coast. It calls for mutual security in the maritime domain in their shared environment, the Indian Ocean. Perhaps, India, with these statements wants to remind Sri Lanka of the SAGAR (Security and Growth For All in the Region) doctrine, of which Sri Lanka has been a beneficiary. The SAGAR doctrine is India’s policy for maritime cooperation in the Indian Ocean and its goal is to build a climate of trust and transparency and increase maritime cooperation to reduce security challenges in the region. Sri Lanka has been integrated into the country’s Coastal Radar Chain Network, and the Sri Lankan Navy also uses Indian-built offshore Patrol vessels.

The two countries have maintained a sturdy maritime relationship, but with China setting a strong foot in the coastal country, India hopes that Sri Lanka is more transparent and consciously avoids any security threats that might arise for her and her immediate neighbour with China’s presence in the Indian Ocean.