How “Invincible” is Sino-North Korean Friendship? 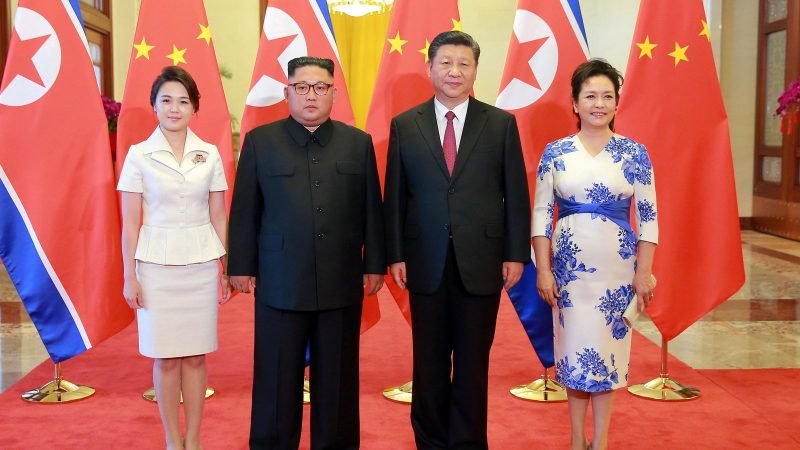 In 1950 during the Korean War (1950-1953),  when dark clouds of defeat loomed over Pyongyang, it was China who risked a full-fledged war to defend North Korea by sending hundreds of its People’s Volunteers. Mao had even challenged the USA to use a nuclear attack on China.  However, soon in 1956, this close relation faced a major blow.

In August 1956, pro-Soviet and Yannan factions of the Workers’ Party of Korea attempted to remove Kim Il Sung as its leader for allegedly developing his own personality cult and distorting the Leninist principle of collective leadership. Kim Il Sung responded by suppressing arresting all the dissenting voices. It was clear that the People’s Republic of China did not support the Great Leader’s coveted position. The “August Incident” made North Korea susceptible to possible Chinese interference in future. Relations between the two became further strained when North Korea vehemently criticised Mao’s Great Proletarian Cultural Revolution. China responded by labelling Pyongyang’s policy as “revisionist”. But better days for the two were coming.

On May 16, 1961, General Park Chung Hee overthrew the Second Republic (1960-1961) in South Korea in a military coup while the United States looked away. The new military dictatorship in the South not only increased the defence budget but also took a hardline towards Pyongyang. Amidst concerns over a possible attack, Kim Il Sung came knocking on the doors of China, extending an arm of friendship. On July 11, 1961, the two countries signed the Sino-North Korean Mutual Aid and Cooperation Friendship Treaty. As per this treaty, the two countries pledged non-interference in each other’s internal matters and to render each other every possible economic and technical aid (Article V).

The most important clause of this treaty is Article II which states:

This treaty assured the North of China’s support in face of a Southern attack. The treaty has been extended twice- in 1981 and 2001. 2021 marks the 60th year of this treaty. The treaty stands as the only example of a mutual defence treaty the two nations have with any country.

The 1990s were a difficult time for North Korea. The disintegration of the Soviet Union meant a disruption in economic aid it received since its inception. Even though China financially supported North Korea, the Soviet Union was its main economic support. The economic crisis soon befell. The Gross Domestic Product growth fell to -4.3% in 1991. A series of natural disasters led to massive crop failures resulting in widespread starvation and malnutrition. The North received food aid from the international community.

In 1992, the nuclear proliferation of North Korea came into the public eye when the International Atomic Energy Agency (IAEA)   declared that the North’s nuclear activities were more extensive than declared. It left the IAEA in 1994 however remained a signatory to the Nuclear Non-Proliferation Treaty. In order to avert its withdrawal from the NPT, the United States negotiated with North Korea an Agreed Framework formally known as the Geneva Accords of the Korean Peninsula as per which the North agreed to “freeze” nuclear proliferation in exchange for a 10-year programme through which the United States, South Korea and Japan would construct two new light-water moderated nuclear reactors in the DPRK. North Korea agreed to remain within the ambit of the NPT and to abide by IAEA safeguards and periodic inspections. The multilateral Korean Peninsula Energy Development Organisation (KEDO)  was to oversee the implementation of the agreement. However, Kim Il Sung’s death delayed negotiations. In the US, conservative Republicans took charge of the Senate and assumed a tougher stance towards North Korea. President Clinton lost the elections and his successor President George Bush Jr. had no plans to show clemency to the DPRK. The agreement died a silent death.

The new President in his first State of the Union address on January 29, 2002, labelled North Korea alongside Iran and Iraq as the “Axis of Evil”, blaming the three nations to be developing weapons of mass destruction. North Korea denied entry to a KEDO delegation and resumed its nuclear programme. It unilaterally withdrew from the NPT in 2003. In order to prevent North Korea from going astray, the Six-Party Talks were convened between North Korea, China, United States, Japan, South Korea and Russia in which China played a major role. The main concern for China was a US military intervention in Pyongyang. The US had just invaded Iraq and chances were high that it could invade the North. China prioritised regime stability in the North more than anything for a US military intervention would not just have placed American mercenaries very close to its own borders but would also have resulted in a massive wave of refugees. International trade worth millions of dollars would have been disrupted. The overall stability of Northeast Asia was under threat. North Korea with China’s support demanded the US to abandon its hostile attitude before denuclearisation could be initiated. The US administration now under the conservative Republicans demanded complete denuclearisation before any negotiations took place. The talk broke down in 2009 and North Korea conducted another nuclear test. China has officially denounced all of its nuclear tests demanding restoration of peace and denuclearisation on an equitable basis. It has also supported sanctions against the DPRK.

China itself has shown great restraint in its nuclear programme and is the only country bound by the NPT that accepts a No First Use Policy.

Sino-North Korean relations received another blow in 2013 after Kim Jong Un discovered a plot hatched by his own uncle, also a trusted ally of the PRC, to replace him with his brother. Warm relations renewed in 2018 after Kim Jong-un visited Beijing followed by an official visit to Pyongyang by Xi Jinping. Moreover, in 2019, North Korea became one of the few countries to extend its support to China’s Xinjiang Reeducation campaign dubbed by western media as the “forceful hanisation” of its minorities. The DPRK also criticised Hong Kong protests against the PRC’s growing administrative control in its politics. In October 2019, the two nations celebrated 70 years of establishing diplomatic relations which they termed as an  “invincible friendship”.

In 2016, Republican Donald Trump came to power as the President of the United States. He had previously criticised former President’s Obama’s “strategic patience” with North Korea however he expressed his willingness to negotiate with Kim. He publicly criticised North Korea on its 2017 nuclear test.  In June 2018, North Korea and the US issued a joint statement for denuclearisation and cooperation in the Singapore Summit. A follow-up the summit at Hanoi in 2019 broke down over the issue of sanctions and the two nations have since been in a war of words. Two weeks before President Biden assumed office, Kim Jong-un called the US, North Korea’s “biggest enemy”. Biden in many of his presidential debates has called Kim a “thug” and stated that no matter who assumes power, the nature of US policy towards North Korea will not change.

Sino-US relations reached an all-time low under Trump’s presidency who raised questions on the origin of the coronavirus, referring to it as the “China virus”. The US has also raised concerns over China’s alleged mistreatment of the Uighur Muslims in the Xinjiang Autonomous Region and its policy towards Tibet, Taiwan and Hong Kong. The Trade war between the two countries was further aggravated by the US’ allegation of espionage on several Chinese firms which also led to the closure of consulates in the two countries. Recently, the Chinese delegation was invited to what is called the Alaska Talks (March 18-19,2021) to discuss mutual concerns with the United States. The two nations discussed security concerns over Taiwan, concerns over Xinjiang, Hong Kong protests among other things but the talks ended on a bitter note with mudslinging and accusations.

China has also expressed concerns over the US’ engagement with the Quadrilateral Dialogue called Quad with India, Japan and Australia which it regards as a way of threatening its maritime activities. After the tense Alaska Talks, China issued a joint statement with North Korea on enhancing cooperation. It is also set to meet with Iran and Russia. China supports both North Korea and Iran financially and diplomatically. Earlier this year, it signed a whopping $400 billion 25 year Comprehensive Strategic Partnership with Iran and also supported the country in its recent fallout with the US over the Joint Comprehensive Partnership Agreement to which China is also a party. Financial aid to North Korea forms almost half of China’s foreign aid. Though China restricting trade with North Korea owing to bilateral tensions and UN sanctions, it is still the North’s largest trading partner. In 2020 owing to an outbreak of the Coronavirus pandemic, China closed its border with North Korea and the bilateral trade has been reported to have fallen as much as 90% by May 2020.

What the US has consistently failed to realise is the reason why North Korea proliferates its nuclear stock. Owing to sanctions and the failure of the command economy, North Korea has faced tremendous economic hardship. After the fall of the USSR, North Korea has faced a hostile diplomatic environment. Nuclear power is its only bargain for survival not just internationally but also domestically. It has provided the raison d’être for the existence of a strong regime that is internally hollow. Nuclear proliferation is also a form of deterrence against a much-advanced adversary. Perhaps, it is only because of nuclear power that North Korea has managed to avert an external attack. However, its nuclear programme has become a nuisance for China. In its rapidly developing economy which is believed to overtake the US, economic sanctions are the last thing China wants. It not just affects China economically but also threatens its international image as a responsible geopolitical power. But the US’ aggressive attitude has drawn the two closer like it did in the 1940s and 1960s. China needs a stable North Korea while the North needs China for survival. China might lead a group against the US with Iran, Russia and North Korea. While the bilateral Sino-North Korean alliance might not be truly “invincible” and are fraught with internal contradictions, it is also true that

China is the only country that can persuade the North to abide by international norms of denuclearisation. It also raises questions about the continuing structure of the Nuclear Non-Proliferation institutions as not only “rogue states” North Korea and Iran but also mature democracies like India have labelled its demand of unilateral denuclearisation of the Third World countries as undemocratic.

There is nothing “invincible” about Sino-North Korea relations if it wasn’t for the hostile attitude shown by the US and its allies. Biden’s presidency was seen as a beacon of hope for democratic principles by the international community. He must not repeat the mistakes of his predecessor. Things have changed and China can no more be pressured into action. The point is not to show any clemency to states which threaten international security but to avert mutual damage through cooperation. The decisions must be in tune with the realities of international power dynamics and it must be realised that only negotiations on an equitable basis can resolve mutual concerns.

Cherry Hitkari is a first year Postgraduate student of East Asian Studies at University of Delhi.