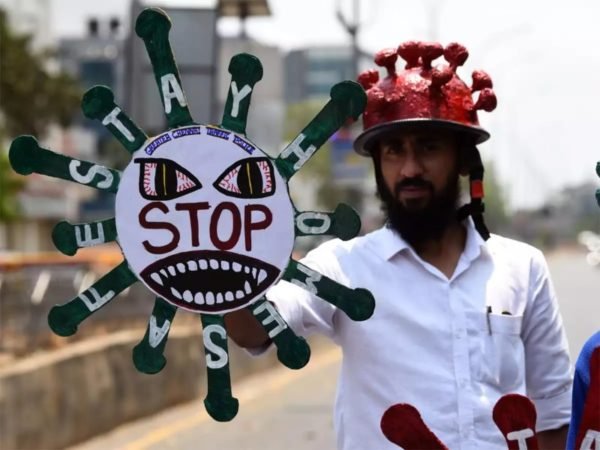 However tragic it might sounds, Coronavirus has diffused due to follies of some and the indifference of others. It is clear that the world, at this juncture, was not at all ready to combat a pandemic. Even the term “pandemic” seemed supervenient to the common populace in Third World countries which, due to the feeble infrastructure, the dearth of resources, were ultimately fated to succumb to this ignorance. Here, we discuss such managements by two major parties: China and WHO. Lastly, we also pour over how Indian weaknesses manifested in crisis time.

Dr Li Wenliang, the whistleblower of coronavirus, on 30 December 2019 forewarned his colleagues on a WeChat group about the presence of a novel SARS (Severe Acute Respiratory Syndrome) case in the hospital where he works. He further foreshadowed the possibility of a community outbreak if the spread starts. The chats got widely circulated and the Chinese authorities summoned him the very next day for “making false comments”. In a few days, he himself got infected with the virus; his condition worsened with the time and he, sadly, breathed his last on 7 February. This first “warrior” who if would be able to alarm at the genesis, the battle would have been won much before with some or no loss.

Chinese officials, strangely, made the first claim of an uncontrolled crisis in February when more than 1700 people have been tested positive.

China unabashedly ignored the International Health Regulations (2005), Article 6 of which mandates the states to notify the WHO in twenty-four hours about the events occurring in its territory which may “constitute a public health emergency International concern”. Keep denying the SARS’s possibility, Chinese officials, in Mao’s style, callously fooled the whole world and the entire legal precautionary gambit and made the world suffer because of their indolence. The schadenfreude of China could be judged by its afterwards declaration of itself a ” global leader” whose ways alone succeeded in containing the virus. With more than 3000 deaths, China must have been lamenting and learning lessons but the opposite is reality.

Without alleging any role of China in “creating” the pandemic, what I try to declaim is its lackadaisical role in containing the virus and failure to adopt a firm attitude for its disposal. What China did in the past few months was nothing short of the derelict attitude of Allied powers during the Spanish flu which ultimately resulted in 100 million (Data may vary)

It has been caustically alleged in the past few and, and latest by the U.S.President Trump, that the way WHO handled the situation casts the imprint of an irresponsible and naive leader. The global health agency didn’t comprehend the gravity of the situation when it puerilely dismissed the claims of human-to-human transmission, believing the Chinese officials, which was, at that critical point, a stupid decision. More than a thousand were then infected, how could it be possible without any anthropical transmission?

Subsequently, the WHO started castigating the countries cancelling their visas to China.

One of the main tasks that the WHO was to perform is the “assessment of the health trends”. Here, assessment has to be interpreted in two connotations, one is knowledge and the other, action. WHO had the experience of dealing with SARS in 2003 so its knowledge is understandably sufficient. And their doctors by hook or crook managed it. The disappointment lied with action. Here the approach was abysmal. Instead of espousing Chinese pecuniary loss due to cancellation of fights, WHO could have warned the world of the possibility of a proximate crisis and phoned for a fraternal methodology for the evacuation process.

The prophylaxis adopted were not calibrated with the demand. In an eccentric manner the “health warriors” failed to analyze the battleground.

The situation was, however, assiduously controlled afterwards. WHO soon accosted the world and well researched and acknowledged the crisis like a pandemic. I hope we get a vaccine soon.

The global vigil was sufficient for India to prepare for an impending catastrophe. Being cautious of its weakness, the Indian government decided to impose a premature lockdown to contain the virus at very incipient. Our very neighbourhood, and more seriously Pakistan, was both economically and socially weakest area in Asia. It, therefore, augmented the tensions as a virus wouldn’t respect boundaries. The Indian Prime Minister then convened a SAARC (South-Asian Association for Regional Cooperation) emergency meeting urging for the initial seizure of corona. India amicably had sent a team of doctors to Malaysia, continuously engaged in talks with Bangladesh and SriLanka. But it couldn’t cover up its own loopholes.

Old chasms have manifested themselves. The lack of social security resulted, as in the words of WHO secretary-general, in the “unintended consequences”. Battling with Corona on one hand and hunger on the other made the job difficult. India, still in a better position compared to Europe, battling the pandemic in every possible way.

The time is for cooperation rather than the blame game. Every person on earth is equally vulnerable as viruses do not know geography. Therefore, this is an exam for vows on climate change and peaceful coexistence to show the same solidarity which is on the paper. It’s an infinitesimal microorganism that taught the world how nature repudiates. As Aristotle famously said that ” Nature does nothing in vain”, hoping to see new models of priorities after the crisis is over.

Anirudh Tyagi is a B.A.LLB(Hons.) student at Dr Ram Manohar Lohiya National Law University, Lucknow, India. He can be reached at [email protected]