Why are we Touting Tesla? 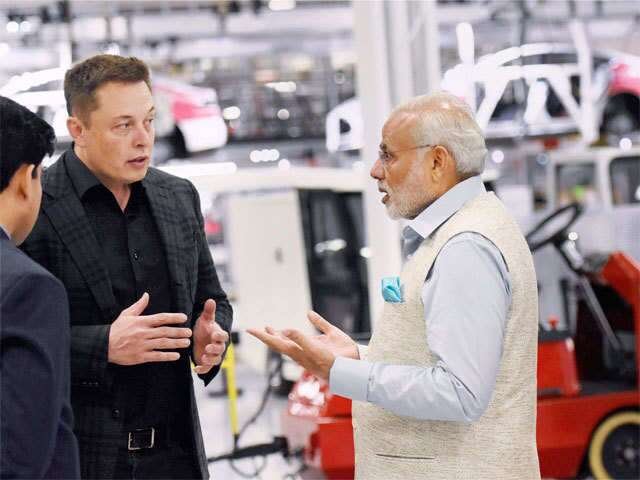 There is a lot of excitement over PM Narendra Modi-led government’s aspirational goal of selling only electric vehicles by 2030. There is little doubt that the future of cars is electric – and for now, Tesla appears to be at the forefront of the movement. But while EVs may be part of the long-term solution, they are currently more of a problem. The EVs that most of us are familiar with, like Tesla, use a battery to store electricity and power the motor. The Tesla Model 3, which claims a range of 570 km became the world’s all-time best-selling electric car in early 2020. The government is touting that with Tesla Motors being offered tax incentives and financial backing via Special Purpose Vehicles (‘SPV’s) to establish a domestic manufacturing unit in India, there will be a shift in the market to plug-in vehicles. In all of this, it is presumed that the life cycle emissions of EV are dependent on electricity generated by non-polluting renewable sources like solar and wind, which is what makes them truly efficacious. How credible are Tesla CEO Elon Musk’s claims of “sustainability” and “CO2 reduction?”

Though Tesla registered a subsidiary in India in January, it has not divulged details of any of its operation plan and models in the pipeline for the country. The hype in India over Tesla coincides with Chinese regulators questioning Tesla on many issues, summoning its officials over customer complaints about battery fires, problems with updating car software and unusual acceleration. Chinese homegrown startups, like Nio, Xpeng and Li Auto, Wuling Hong Guang Mini EV are offering stiff competition for Tesla. The Indian EV market is very small, compared to that of China. To sustain itself here it will have to heavily depend on exports, possible only if the incentives are aimed to drive up exports. Tax on electric cars in India is already the lowest at 5%, compared to other vehicles.

Recently David Fickling of Bloomberg impugned Tesla stating that “Elon Musk Should Come Clean: Tesla’s Emissions Are Rising.” Driving an EV in places with clean energy sourced from renewables translates to better efficiency and lower CO2 footprint. But what about places that have a high-emissions grid like those in China or India. In our scenario the picture changes substantially. India’s electricity sector is dominated by fossil fuels, in particular coal, which produces about three-quarters of the country’s electricity.

Battery production for EV is much more detrimental for the environment than the production of internal combustion vehicles. The initial environmental footprint from current EV production is greater than the production of ICE. At present, the CO2 emissions in an EV, resulting from the generation and transmission of electricity required to charge the battery translates to 122 g CO2/km. Compared to an ICE car which stands at approximately 130 g CO2 /km, this difference is not much. Only in the case of a 22 per cent penetration of renewable energy in 2030, will the CO2 emissions from an electric car be about 8 per cent. Lower CO2 emissions per electric car is dependent on increased penetration of renewable energy (high renewables scenario – 31 per cent renewable energy penetration with a grid emission factor of 556 g CO2. While some smaller batteries in economy size EVs may take as few as 2 metric tons, but larger EVs with long-range batteries could be responsible for up to 17 metric tons of emissions. Conversely, the average CO2 production for an ICE vehicle is around 7 metric tons.

The large batteries EVs use are made with lithium which like any raw material needs to be mined. And the mining process produces lots of greenhouse gases. It’s a problem that’s only going to grow unless the manufacturing process becomes more efficient. Sales of EVs topped one million per year for the first time in 2017. Some estimates predict that by the year 2030, there will be more than 125 million EVs on the road. Needless to state – lithium is in high demand.

In the case of India, the lack of mineral resources for manufacturing critical components indigenously must be considered. India has limited known reserves of the minerals required for the manufacturing of EV powertrains and batteries. About 58% of the world lithium reserves are in Chile and about 43% of rare earth mineral reserves are in China. The Atacama Desert in a triangular region between Chile, Argentina and Bolivia has suffered massive groundwater leaching because of drilling through mineral-rich salt brine to extract lithium. It takes 750 tons of brine to produce one ton of lithium. India’s lithium imports have increased by about 6.5 times, while rare earth mineral imports have increased by about 2.4 times over the period from 2010 to 2017. The sourcing of another component used in batteries – Cobalt is cause for an ethical dilemma as child labour is extensively deployed in these mines.

India lacks competence in basic semiconductor and power electronics manufacturing compared to China from where these components are currently being imported. The process in which lithium-ion batteries are recycled is not at the point it needs to be to deal with the growing number of spent batteries from EVs. There are plenty of different challenges associated with recycling these batteries. Relatively inane things like storage become a huge issue because of the volatility of the elements in a lithium battery. There have already been several fires in facilities that process old batteries.

Further battery-powered electric vehicles take too long to recharge, have a limited range before they need to be recharged and they cost a lot more than the comparable gas-powered car. Any potential shift in the market will depend on the government’s plan to subsidise the vehicle, due to their high upfront cost. But even in the future is that subsidy justified. According to Bjorn Lomborg, author of The Skeptical Environmentalist, “It is daft to waste billions of public money on rich people’s playthings that kill more people through air pollution (because of the electricity production method) while barely affecting total carbon emissions.”

Elon Musk has been criticized for frequently pushing ahead stated production and release dates of products, several times missing projections for Tesla. Its Fremont Factory has been repeatedly accused of environmental violations. Mahindra & Mahindra and Tata Motors both have electric vehicles that are currently being sold in India, but even so EV market penetration is at a nascent stage with only 1% of total vehicle sales in India, and of that, the bulk nearly 95% are electric two-wheelers. As time goes on and new processes come into play the environmental impact will get better, for now, India is simply not EV ready.