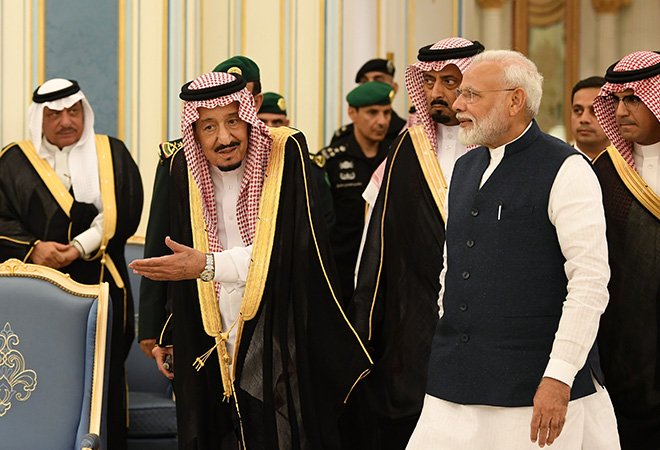 The last two decades of the 21st century has witnessed a perceptible growing synergy of policy vision and expanding the scope of cooperation between India and Saudi Arabia. The relation has gained unprecedented momentum in recent years. The diplomatic relation was established in 1947 which was strengthened with the India visit of King Saud in 1955 and Prime Minister Jawaharlal Nehru’s visit to the kingdom in 1956. The relation was firmly consolidated in 1982 with the visit of Prime Minister Indira Gandhi to the kingdom. The changing geopolitical syndrome in the 1990s in West Asia with the collapse of the USSR and the subsequent US-Afghan war in 2001 and the 2003 US occupation of Iraq produced a new threat perception and security imperative in the shared region of India and Saudi Arabia. The implications of the changes had deep and multiple bearings on their national interest and security domain.

The growing mutual concerns and common interests led to the ‘Delhi Declaration’ in 2006 during the visit of H.R.H King Abdulla to India which laid the foundation of a new sense and pace of cooperation. This relation picked up momentum with the ‘Riyadh Declaration’ in 2010 during the Riyadh visit of the Indian Prime Minister Manmohan Singh, which emphasized cooperation in numerous arenas and committed to a strategic partnership based on their areas of complementarity and interdependence. As part of India’s larger geopolitical vision and global security strategy in the region, India’s then Defence Minister, A K Antony became the first Indian defence minister to visit the kingdom in February 2012 which put the relations on the elevated ground of security vision and strategy of the two countries. This upward trajectory of pursuits got further enhanced with the ‘Joint Statement’ released during the visit of His Royal Highness Crown Prince Salman bin Abdulaziz Al-Saud, Deputy Prime Minister and the Defence Minister of the kingdom in February 2014. The defence cooperation and shared security perception and strategy to have a common front to deal with maritime security, framework and cooperation for dealing with the challenge of terrorism. The cooperation was promoted for a robust economic engagement and trade promotion with the Saudi- India Business Council in Delhi in December 2015.

The visit of Prime Minister Modi to the Kingdom in April 2016 with the ‘Joint Statement’ has ensured the new fillip and increasing acceleration to the relations and its vitality for the shared security and prosperity of the region. The two leaders in the ‘joint Statement’ agreed and endorsed the need to enhance their cooperation to strengthen an integrated approach to maritime security in the Gulf and the wider Indian Ocean region, a vital point for the security and prosperity of the two countries. Thus security and defence cooperation assumed greater salience in the strategic engagement of the two. Thenceforth, defence cooperation has gained pace with the exchange of military personnel and experts, joint military exercises, the exchange of visits of ships and aircraft, the supply of arms and ammunitions and their joint production. The regular meeting of the ‘Joint Committee on Defence Cooperation’ has ensured the track a focused path to the vision of shared security.

The visit of the Crown Prince, H E Mohammed Bin Salman in February 2019 had taken the ‘strategic partnership ‘vision of 2010, Riyadh Declaration’ to an enduring ground with the clear reaffirmation of their commitments in the ‘Joint Statement’. The two sides agreed to hold the inaugural joint naval exercises and further expand the joint exercises in other domains as well. In order to deepen the cooperation, the two countries agreed to cooperate and collaborate in joint defence production of spare parts of naval and land system as well as supply chain development in a mutually reinforcing syndrome for ‘Make in India’ and ‘Vision 2030’. The maritime security of the Indian Ocean has become the central concern of the Indian security and strategic thinking in the wake of increasing Chinese threatening expansion with its so called ‘String of Pearls’ which are basically the string of threats to Indian security vision. The security of the Gulf is similarly the foremost security concern of Saudi Arabia which is integrated with the wider India Ocean security. The evolving mutual security concerns, therefore, has led the two countries to commit to working together with other Indian Ocean rim countries for enhanced and coordinated security, vital for shared security and prosperity of the two countries and safe passage for this strategic trade route.

The menace of terrorism is a common threat to both countries. Given the potentially destabilizing impact and implications, both India and Saudi Arabia have displayed profound pragmatism to device and develop the common and coordinated framework and strategy to fight and exterminate the destructive and divisive devil. In line with this, the two countries have constituted ‘Comprehensive Security Dialogue’ at the level of National Security Advisors to have constant supervision, policy feedback and adoption of appropriate strategy to act proportionately and effectively. For focused monitoring and timely action, a ‘Joint Working Group on Counter Terrorism’ has been set up.

The regional outreach and ‘Neighbourhood First’ has been new strategic thinking of foreign policy under Prime Minister Modi. These are well-crafted policy strategies to engage with the neighbourhood region to build its strategic steps and pathways to realise its global aspirations. In his interview with Arab News on 29th October 2019, during his visit to the kingdom, Prime Minister Modi said that “Neighbourhood First” continues to be the guiding vision for my government’s foreign policy. India’s relations with Saudi Arabia are one of the most important bilateral relationships in our extended neighbourhood. I believe that Asian powers like India and Saudi Arabia share similar security concerns in their neighbourhood.” The Prime minister enumerated a number of mutually complementary policies in the two countries to express the shared opportunities for a mutually reinforcing and assured future. He added that “A number of major flagship initiatives, like Make in India, Digital India, Skill India, Swatchh Bharat, Smart Cities and Start-up India are offering a lot of opportunities to foreign investors. Similarly, I am happy to note that Saudi Arabia too has embarked upon a reform programme as part of their ‘Vision 2030’.”

In his keynote address to the ‘Future Investment Initiative’ on 29th October 2019, Prime Minister Modi in a gesture of closeness of relations addressing the Saudi Crown Prince said that “being his brother and neighbour, it is only natural for me to represent the world’s fastest-growing economy in this excellent initiative.” He further added that “The roadmap for $5 trillion economy is ready. We will stand by Saudi Arabia’s Vision 2030 and the schemes to diversify the economy.” The ‘Joint Statement’ stressed the commitment of the two countries to deal with terrorism and rejected the attempt to link it with any religion, race or culture. India condemned the terrorist attack on civilian installation in the kingdom.

Both the countries stressed the need to cooperate to transform their economies by expanding their trade and investment engagements to deepen their strategic cooperation. India has become the fourth country to sign the Strategic Partnership Council Agreement with the kingdom. The Indian cabinet approved the formation of the council on 27th November 2019. The Strategic Partnership Council has a twin-track for cementing the cooperative strategy of the two countries. First, political, security, culture and society headed by foreign ministers of both countries. Second, the economy and investment headed by the Commerce Minister of India and the Energy minister of Saudi Arabia. In his article (Saudi Arabia and India: The Upward Trajectory) published in Outlook on 24th January 2021 H.E Dr Saud bin Mohammed al Sati, Saudi ambassador to India wrote that the Strategic Partnership Council led by His Royal Highness the Crown Prince and Prime Minister of India supported by ministerial representations is covering all aspects of strategic relationships. There is internal transformation underway both in India and Saudi Arabia which is producing numerous opportunities of cooperation between the two countries. The upward trajectory in trade is its clear indicator which has grown from $27 billion in 2018-19 to $34 billion in 2019-20. The pandemic outreach and cooperation present a new dawn of relationship. Referring to the complementarity of Saudi ‘Vision 2030’ and India’s Five trillion economy’ vision and their reinforcing features he wrote that “Saudi Arabia will continue to partner with it (India) for mutual growth and regional stability. I am certain that the current decade will be unprecedented for our strategic partnership that shall not only benefit our two countries but also for the MENA region and South Asian Region.”

These growing engagements and cooperation are manifestations of the fact that the relation is in the higher trajectory of deepening mode and widening in multiple arenas of mutual interests for shared and mutually reinforcing benefits for both countries. The pattern is also reflective of the changes underway in the geopolitical landscape of the region, global order and future vision of security and stability of their shared region and sustained course of future prosperity. In brief, the growing synergy in India-Saudi Arabia relation is a vital pursuit based on their mutual national interests, regional security imperative and to face the global challenges with the force of mutual cooperation and to stand strong as credible Asian powers for ensuring regional security and prosperity in the post-pandemic world order.