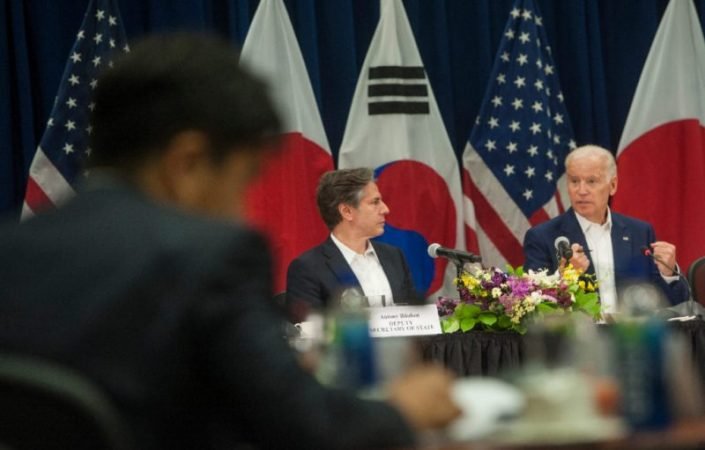 This is second part of the article Biden’s “America First is America Alone” and Korea’s Dilemma. Read the first part here

The Biden administration is contemplated to pursue a “policy toward North Korea based on principles”. Accordingly, stronger policies toward North Korea are anticipated to follow. Yet, the US humanitarian approach to North Korea is believed to remain open due to the characteristics of the Biden administration. The last administration recognized Chairman Kim Jong-Un’s political legitimacy and raised his international status. In accession, it allowed for a drastic increase in nuclear-armed forces and showed a breakthrough step in promoting direct dialogue between the two leaders. Equally, the strategy for denuclearization toward North Korea has been reversed. Imminent, the White House will focus on more substantial denuclearization progress.

For a while, the interest of the US is likely to be concentrated in Europe and the Middle East. This is apparent from the frequency of mentioning North Korea or Iran in the election process of the new US administration so far. The Obama administration’s “pivot to Asia” was based on or premised on stability in Europe and the Middle East. Nonetheless, during the four years of the Trump administration, US relations with Europe were disrupted, and US influence in the Middle East declined. In especial, the Iranian nuclear agreement, which was banked on to be the biggest goal of the Obama administration and a key device for stability in the Middle East and Europe, was nullified. Of course, the China issue will be the top priority for the Biden administration as well, and in this regard, strategic actions through the “Asia rebalancing” and the “Indo-Pacific Strategy” will go on. All the same, in order to overcome Trump’s negative legacy, the “return to Europe and the Middle East” will inevitably become a preference case for the White House. Thus, there are fewer incentives to use North Korea to check China. Alternatively, North Korea’s nuclear threat, particularly the threat to the US mainland, has been heightened and materialized. The combination of the two is the fact that Washington can no longer neglect North Korea. The seniority of the North Korean issue in the foreign policy of the Biden administration is lower than that of the Trump administration, but it is anticipated that “strategic patience” will no longer be possible. Consequently, it is expected that Washington will gradually reduce its nuclear competencies through a ‘small deal.’ As well, the US will make complete denuclearization as its long-term goal, with its primary target being the cessation of full production of nuclear material, and halting tests to prevent the progression of nuclear weapons and long-range missile technology.

North Korea, which ended the party congress in January, alleged itself a “nuclear force”. This has the potential to make it difficult to initiate dialogue between the US and North Korea. In the case of America, Iran’s nuclear matter is also an urgent topic to be resolved. In this position, it would be difficult to recognize North Korea as a nuclear power and make a claim to Iran for denuclearization. Thus, the ROK should first draw out North Korea’s willingness to denuclearize and lead the progress of dialogue between North Korea and the US. North Korea has been developing nuclear weapons at risk of life and death, and will never simply give up its nuclear weapons. Thence, the South Korean government should maintain the North Korean policy and unified security policy regardless of changes in government. Videlicet, there is a demand for an independent policy organization to keep the policy stance toward North Korea. Korea should have a social consensus decision-making body and a decision-making system that can retain consistency even if the regime changes. Namely, it is desirable that North Korea’s policy is determined by social consensus.

Can the Korean Peninsula have a Game Changer?

Recently, ICJ complaints about the comfort women affair, centered on the comfort women victim Lee Yong-Soo, have outfited in Korea. As a result, attention is paid to whether the wrong past with Japan can be re-established and whether it can become an international declaration of correct history. Withal, it is awaited that the White House’s calculation method for Korea-Japan relations will be complicated.

Washington will urgently need a prompt recovery of Korea-Japan relations for the solidity of ‘Korea-US-Japan’ cooperation. The White House, which puts cooperation between multilateral diplomatic channels and allied powers the most critical, will try to strengthen the’ Korea-US-Japan’ partnership. The most pressing issues in the Korea-U.S.-Japan’ alliance is probably the relationship between Korea and Japan. The current conflict between Korea and Japan is not precisely a topic of history. This is because it is not a problem solely in Korea and Japan, but a problem related to the “human rights” faced by all humanity. It is stated that the claims between Korea and Japan have been resolved, but there are obviously still unresolved things such as natural legal and individual claims. As the Democratic Party of America puts “human rights” as the most major banner, the Whitehouse should grasp the specificity and sensitivity of the subject of the dispute between Korea and Japan and take a more active initiative. Expressly, it is requisite to first change the White House’s perspective on Korean-Japanese questions. The most significant thing in Korea-Japan relations is solving the emotional problems between the two countries. Only after resolving Korea’s national anti-Japanese sentiment can we move forward with stronger ROK-US-Japan security cooperation.