Sri Lanka-Pak all set to enhance their economic ties 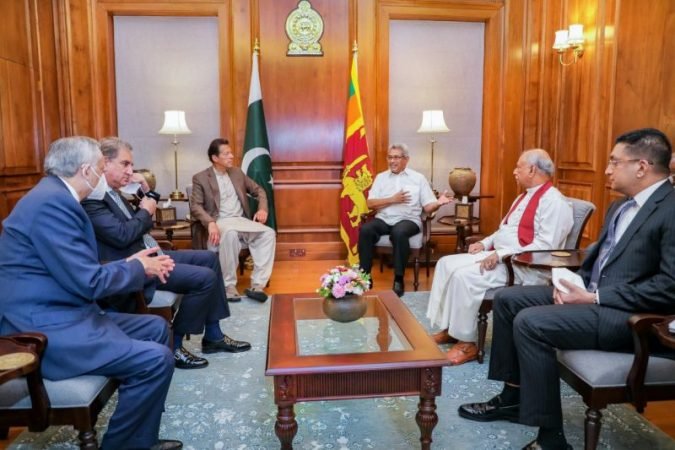 Pakistan Prime Minister Imran Khan visited Sri Lanka for a bilateral meet on 23. During the two-day visit PM Khan met Sri Lankan President Gotabaya Rajapaksa, Prime Minister Mahindra Rajapaksa and Foreign Minister Dinesh Gunawardena, followed by an investor forum meeting on February 24th. However, the Lankan government called off PM Khan’s previously planned address to the parliament citing COVID-19 restrictions as the reason for the move, although sources claim it to be a caution-step of the Rajapaksa administration to avoid PM Khan’s move to raise the Kashmir issue in his address, thus guarding Indo-Lankan ties which are already strained due to the cancellation of Eastern Container Terminal (ECT) project.

Both the governments acknowledged their growing economic cooperation over the past 14 years (2004-2018) as Pakistan’s export to Lanka grew from US$97 million to US$355 million, whereas Sri Lanka’s export to Pakistan grew from US$47 million to US$105 million. However, despite this significant progress, the two countries agreed that due to lack of awareness Pak-Lanka exporters do not make full use of free-market benefits under PSFTA thus undermining the bilateral trade potential of US$2.7 billion. Therefore, both governments will be seeking to increase these figures via pursuing the opportunities within PSFTA and reactivating the Joint Working Group (JWG) to redress technical issues between the trading partners.

To further enhance trade and connectivity with Sri Lanka, PM Khan emphasized that the CPEC flagship programme under China’s BRI project would help Sri Lanka to enhance its connectivity “right up to Central Asia”, and will also bring Pakistan and Lanka “close together.” Besides this, Sri Lanka appreciated Pakistan’s initiative to open the pilgrimage corridors for Sri Lankans to visit ancient Buddhist heritage sites in Pakistan. The two sides also agreed to restart Pakistan-Sri Lanka Parliamentary Friendship Groups and continuing the mechanism to curb & counter illegal activities like drug trafficking, arms smuggling by sharing information through the relevant agencies.

It is crucial to note that Sri Lanka and Pakistan did not sign any defence agreement, as the Lankan Foreign Secretary Jayanath Colombage said “several agreements on economic cooperation, culture and other subjects are on the cards but none on defence.”

However, this does not mean that Lankan-Pakistan ties lacked military cooperation in the past. During the 1971 Indo-Pak War, Sri Lanka permitted refuelling and overflying of Pakistani military planes from West to East Pakistan. Whereas, from 2000 onwards, up to the end of Tamil separatist Civil War 2009, Pak-Lanka has showcased strong military ties. In 2000 Pakistan airlifted Lankan Multi-Barrel Rocket Launchers as the LTTE offence “Operation Ceaseless Waves” overran Lankan military positions and trapped government troops in Jaffna. Pakistan Air Forces also successfully carried out airstrikes against LTTE military bases, helping the Lankan government to counter LTTE forces. Lastly in 2008, the then Lankan Army Chief, Sarath Fonseka went on a special mission to Pakistan to buy 22 Al-Khalid battle tanks (worth USD 100 million) and other military hardware worth USD 65 million for future Lankan procurement.

As 2009 witnessed a new geopolitical dynamic which saw the emergence of China as a key economic player on the Lankan soil, clearly evident via Colombo Port City. The increasing Sino-Lanka economic engagement along with Beijing’s military potential posed a subsequent threat to India, given the strategic location of the island, this led to the decline of Lanka-Pak defence cooperation as under India’s insistence Indo-Lankan military cooperation significantly grew.

Thus, since 2005 Sri Lanka has been regularly having naval exercise SLINEX with the Indian Navy, and it has not conducted any such bilateral or multilateral exercise with the Pakistan Navy, even though Pakistani naval vessels do visit the Colombo Port quite frequently. The reason behind this discrepancy, apart from the changing geopolitical scenario, might be Sri Lanka’s strategic interest over the Indian Ocean (IOR) for ages, given its geographical location and its firm commitment to UNGA Resolution 2832 (XXVI) which declares the Indian Ocean as a Zone of Peace. This Lankan aspiration to establish peace in IOR and preserve its strategic interest is reflected in Sri Lanka’s recent move to participate in Pakistan February’s initiative of Multinational Naval Exercise “AMAN 21” that aims to enhance interoperability between regional and extra-regional navies to combat the challenges inflicted in IOR under the changing trends.

This leads to the conclusion that even though countries are trying to woo Sri Lanka for its strategic military importance, the Lankan government has abstained from entertaining any deeper military ties or alliance build-up, but rather has encouraged enhancement of economic ties. This is visible in the recent Lankan-Pak bilateral meet as Islamabad and Colombo aim to scale up cement, sugar export and tea, betel leaves export respectively to each other via the PSFTA framework. Further apart from aspiring to reach the true potential of the free-trade agreement, the two countries have accelerated new avenues of investment, thus aiming to revive their COVID-hit domestic economy by establishing trade channels within South Asia and not being dependent on the western states.

Lastly, Pakistan’s invitation to link Sri Lanka “right to Central Asia” to enhance connectivity, certainly signifies Pak-China’s proxy move to counter India. This move is likely plausible as both Pakistan and Sri Lanka are moving away from the US and getting closer to the axis of Russia and China. Therefore, this bilateral meet might mark the emergence of an economic-nexus between Sri Lanka, China and Pakistan shortly, thus affecting Indo-Lankan economic ties.