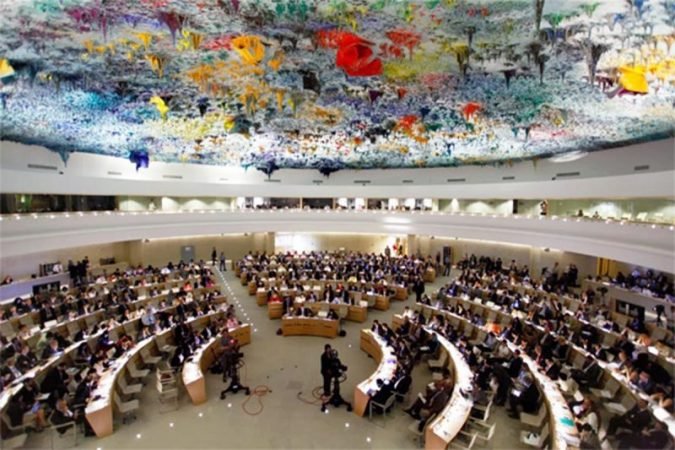 The UNHRC is gearing up to launch its 46th session virtually on 22nd February.  Following that Sri Lanka has now officially sought India’s support ahead of Next Week’s UNHRC session on its rights and accountability record.

Speaking to a state-run media television news channel the Sri Lankan Foreign Ministry Permanent Secretary Jayanath Colombage has said that India was the first nation that Sri Lanka had turned to for support and his country has sent a special communique to the Honourable Indian Prime Minister for seeking his help. During the 46th UN, Human Rights Council (UNHRC) session in Geneva next week Sri Lanka’s record in human rights and related accountability will be probed.

The senior foreign ministry official’s comment has come after the UNHRC core group of Sri Lanka in a joint statement said that resolution will be moved next week to focus on the country’s rights accountability. The Sri Lanka core group consists of the United Kingdom, Germany, Canada, Malawi, North Macedonia and Montenegro. The Foreign Ministry Secretary has expressed confidence that India will support Sri Lanka country for the sake of regional solidarity. He also went on to state that Sri Lanka was expecting support from Russia and China as well.

The Sri Lankan civil war had finally ended after almost about three decades of violence. The government claimed to have defeated the LTTE in a final offensive that resulted in the deaths of tens of thousands of civilians, according to the UN figures, up to 40,000, who were perhaps not even related to the war and also the execution of scores of captured LTTE combatants. The previous Sri Lankan government had co-sponsored the resolution in 2013 calling for accountability for alleged war crimes committed by the government forces and the terror group LTTE. Sri Lanka faced three consecutive UNHRC resolutions since 2013 which has called for an independent international investigation into alleged war crimes committed by both government troops and the Liberation Tigers of Tamil Eelam (LTTE) during the final phase of the civil war back in 2009.

Now the current government had officially withdrawn from the resolution co-sponsored by Sri Lanka in 2015, 2017 and 2019 under the previous government. A recent United Nations report warned that Sri Lanka has made “little progress” toward ensuring accountability for alleged atrocities and the failure of Sri Lanka especially the leaders of Sri Lanka, Mahindra Rajpaksha who was at that time the Sri Lankan president is reportedly being looked at like a failure of the Sri Lankan state in addressing the past human right violations and this has significantly heightened the risk of human rights violations being repeated.

It’s also said that they’re extremely worrying trends over the past years such as deepening impunity, increased militarization of governmental functions, ethno-nationalistic rhetorics and also the intimidation of civil society that point towards the danger of possibly greater oppression of minority groups in Sri Lanka.

Meanwhile, in New Delhi’s backing and abstaining from the resolution, India’s only domestic concerns about the UNHRC vote has been the backlash from Tamil Nadu. On the past occasions when US-led resolutions were being passed against the island nation, India voted in its favour for fear of a backlash from Tamil Nadu after being publicly indecisive till the last minute. Tamil Nadu had witnessed widespread protests and rallies demanding India to vote in favour of the resolution. All the political parties in the state wanted India to support the resolution.  A popular Sinhala majority perception in Sri Lanka was that UNHRC did not have the mandate to set up an international probe.

Amidst this when the spotlight is in Sri Lanka in the 46th session of the UN Human Rights Commission and Sri Lanka turned first to India seeking support, Now the ball is in New Delhi’s court. Meanwhile to note, In this process – by not voting against Sri Lanka – India can gain some geopolitical mileage with the island nation and by favouring the resolution, a domestic vote in favour.