Japan’s dream of possible war: The history that must be denied 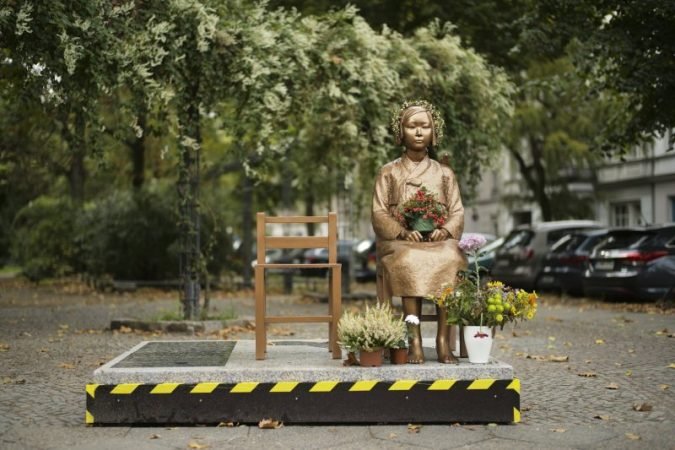 Professor John Mark Ramseyer of Harvard University Law School in the United States published a thesis on “comfort women” in the Japanese armed forces. This paper is controversial because it contains the content that the victims were prostitution, not enforced sex slaves. Professor Ramseyer’s thesis contradicts not just the recognition of the international community that defined Japanese military comfort women, victims, as enforced sex slaves, but as well with the 1993 “Gono Discourse” when the Japanese government acknowledged and apologized for the forced mobilization of comfort women. The paper, entitled “Contracting for sex in the Pacific War,” will be brought out in Volume 65 of the journal “International Review of Law and Economics,” scheduled to be issued in March.

Described to Japan’s Sankei Shimbun, Professor Ramsayer argued that the detriment to comfort women was due to employment fraud in Korea. Sankei reported that “comfort women have indicated that they were along the extension of prostitution, which was allowed under Japanese government regulations at the time.” The Sankei Shimbun, a Japanese right-winger, said that this thesis raised an objection to the theory that “comfort women = enforced sex slaves” and judged it as “significant”. Besides, Japanese scholars began shooting for a dissertation controversy with Professor Mark Ramsayer, who defined the victims of comfort women as ‘prostitutes’.

However, the criticism against Professor Ramseyer is heating up.

Director Miki Dezaki said in an interview related to the documentary film <Main Battlefield> released in 2019, it should be noted why the Japanese are attempting to “silence” when it comes to the comfort women issue.

The Japanese government and the right-wing powers have repeatedly strongly opposed the “Statue of Peace” that is spreading around the world, and are making hard efforts to eliminate all. Japan is constantly striving to create a new history of its past mistakes at the government level through right-wing forces. One of Japan’s right-wing organizations, the “group to create new history textbooks,” stated, “The state should not apologize. It is a basic proposition that the nation does not apologize.

Hence, ultimately, why Japan is attempting to distort history? Japan has been publicly stating its intention to amend the constitution several years ago. In the days of the Abe government, the constitution amendment ended in failure, but Japan’s right-wing forces, centered on Abe, expressed their purpose to persist in promoting the constitution. The intention is to amend the fundamental law to make it a war-able country.

Then, what does it mean for Japan to become a war-capable country? This is understood as meaning that Japan will further strengthen nationalism in its own country and proceed forward as a hegemonic country in East Asia. Japan’s right-wing forces are seeking to erase specific inflicts from history, such as war crimes, especially the comfort women issue, mostly reflecting the intention to amend the constitution. This is possible because the elimination of history has not been done properly. A-class war criminal, former Prime Minister Abe’s maternal grandfather, Kishi Nobusuke, was imprisoned instantly after the Pacific War and was pardoned with the cooperation of the US military government. Since then, he has climbed to the position of Japanese Prime Minister. Abe has also revealed his aim to carry on his grandfather’s political will. The United States, which had been fiercely competing with the socialist camps leading to the former Soviet Union, China, and North Korea, did this because it needed to establish pro-American regimes in South Korea and Japan, which are at the geopolitical core of East Asia. In the end, Asian countries that have led a history that failed to liquidate in the Cold War are still bleeding. The current conflict between the Korean government and Japan is not unrelated to this history. For this reason, historical truth must be properly identified.

The comfort women issue is a question of women’s rights in war. It is a universal problem of human rights in the world beyond Korea and East Asia. The comfort women issue has been adopted as a report by the UN Human Rights Investigator through the courageous testimony of the victims and the efforts of civic groups and experts around the world. Through this, comfort women have already been defined as war crimes in the international community. As a result, the Japanese side, which has no longer been able to evade responsibility, continues to evade publicizing the issue of comfort women.

Referencing the great connection between Japan and Korea in historical distortions, Japan insists on the removal of the “Statue of Peace” through the “anti-Japanese nationalism” frame. Even so, many civil societies around the world acknowledge this subject as a human rights issue called “sexual violence against women in war.” For this ground, there is a strong voice in Korea on the comfort women issue. It is a view calling for a broader approach to the “universal human rights issue” rather than the “anti-Japanese” picture of Japan’s behavior regarding comfort women.

From the time of the inauguration of the first cabinet in 2006, former Prime Minister Abe has identified “a departure from the postwar regime” as the primary agenda of the government. The pact with America set promptly after the war made Japan unable to have an army, and hence, it has relied on the US in the field of defense. For this ground, Japan’s right-wing forces have regarded that it is impossible to build a normal independence strategy. Therefore, Japan’s new policy goal, centered on Prime Minister Abe, is an independent defense through the amended constitution and the spread of redesigned history. Japan intends to reinforce its alliance with the United States through the “exercise of the right to collective self-defense” after the constitution is revised and further develop into a stronger country in East Asia. The most important factor in ‘escaping from the postwar system is analyzed by forming an independent national defense. Agreeing to this, it presents a vision of Japan that actively leads to international peace, along with the three principles of the maritime state, peaceful state, total defense, and non-nuclearization that Japan has been pursuing.

The US desires to further beef up its bond with Japan and solidify its role in Asia by exercising Japan’s right to collective self-defense. Even so, Japan seems to go one step further and dream of militarism again. In summation to attempting to revise the constitution, former Prime Minister Abe stimulated the neighboring countries with actions such as visiting Yasukuni Shrine and rewriting the past. Former Prime Minister Abe’s actions just as such do not seem to remain even a point of reflection on the past. The ongoing incitement to neighboring countries is substantially deteriorating relations with states in East Asia. In 2019, the Supreme Court of the Republic of Korea ruled in recognition of the individual claims of victims of forced conscription in Japan at the time of colonization. Since then, Japan has implemented direct economic retaliation against Korea. Due to the fact that, the relationship between the two countries has been degenerating, and the relationship between the two countries is showing no marks of improvement even today.

In this situation, if the threat of armed force from China or North Korea becomes a reality, peace and security in Northeast Asia will be in uncontrollable danger. The matter of liquidating Japan’s past history goes beyond the subject of correcting historical perceptions and has an important meaning to prevent Japan’s military development and enhance peace and security in East Asia. Thus, the international community should also cooperate in preserving peace in East Asia by understanding the significance of Japan’s correct historical perception related to the Pacific War. In summation, the comfort women issue should not be reckoned as a local issue, but should be realized as a human rights issue for women in the war, and endless efforts should be made to ensure that the same thing does not occur once more.

Few countries on Earth are border-to-border friendly. Only the Earth is already highly integrated and we live in a very close world. In recent years, numerous countries have revived their own priorities and isolationist lines, and in some regions, conflicts between civilizations, ethnicities, and religions have been intensifying. This is the time when we need to be self-conscious about ourselves, which is far from extreme nationalism or religious fundamentalism and thinks first of the universal interests of humanity aside from diplomatic notion.