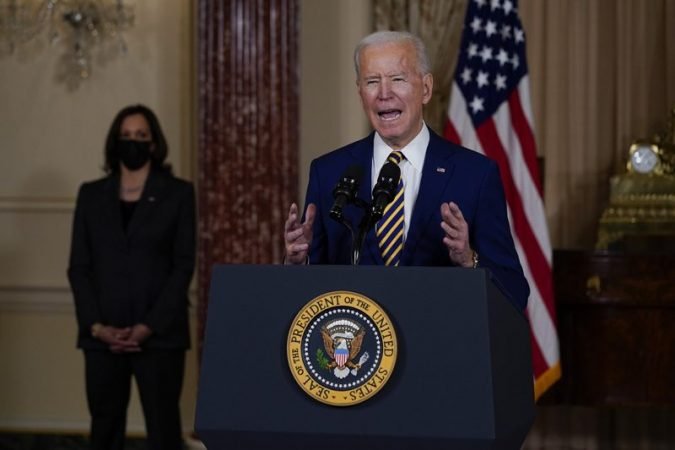 US President Joe Biden delivered his first foreign policy speech yesterday and the takeaways from the speech pinpoint towards a shift in America’s foreign policy. It was estimated previously that policy shifts are bound to happen, given Biden’s party ideology. The speech rebranded the foreign policy as ‘America is back, diplomacy is back’. The highlights of his speech stressed heavily on policies and actions to be taken against the leading countries of the SCO bloc; China and Russia. The span of his speech also stressed on economic revival and the challenges ahead of the post-COVID-19 era.

Biden reiterated the point he had mentioned in his inaugural speech when he mentioned that his Presidency will focus on restoring alliances and work at par with the international world order. He stated, “we will repair our alliances and engage with the world once again, not to meet yesterday’s challenges, but today’s and tomorrow’s.” Staging diplomacy at the heart of America’s foreign policy, he stressed that through this mechanism his government will be able to tackle “advancing authoritarianism”. The statement, of course, was intended towards China’s and Russia’s ambition for a communist-socialist world. He declared “America is back” which is a gentle reminder for the leading nations to buckle up and sail along with the winds of change.

Questions arise as to whether the US’s foreign policy be enacted in a way to only counter China and Russia. Biden spoke at length about nuclear proliferation and stability. Nuclear tension is not a new agenda for any country, but the lessons of the Cold War continue to overshadow any nuclear deal. Therefore, he extended the New START (Strategic Arms Reduction Treaty) signed between the US and Russia for another 5 years, calling for nuclear weapon stabilization and cooperation in the field. President Biden sternly reminded the Russians that any sort of attack on the democratic structure of the United States won’t be tolerated. To quote the President, “At the same time, I made it clear to President Putin, in a manner very different from my predecessor, that the days of the United States rolling over in the face of Russia’s aggressive actions — interfering with our elections, cyberattacks, poisoning its citizens — are over. We will not hesitate to raise the cost on Russia and defend our vital interests and our people. And we will be more effective in dealing with Russia when we work in coalition and coordination with other like-minded partners.”

Calling upon US’s closest allies— the UK, Canada, Mexico, Japan, South Korea, Australia, and NATO, it was a bit startling to not see India, given the warm bonhomie shared between India and US under Trump’s administration. The revival of NATO could be sensed given that his official speech focused too much on Russia and China. Addressing the latter, Biden reminded his Chinese counterparts that the US will no longer adhere to the “economic abuses” presented by them. A confrontation was declared through the new foreign policy. He mentioned, “We’ll confront China’s economic abuses; counter its aggressive, coercive action; to push back on China’s attack on human rights, intellectual property, and global governance.” However, on the soft diplomacy front, he went firm to express America’s willingness to work with China, provided it qualifies to suffice the country’s interest.

Administering the US back into the Paris Agreement, the President had already sent a strong message; it will undo most of Trump’s policies. The raging pandemic has posed challenges to all countries and the World Health Organization (WHO) has significantly been updating and providing information regarding the same. Trump had earlier threatened the organization to withdrew funds stating suspicion over the organization’s involvement with China. But Biden presented a clear picture and dedicated his administration’s policy in alignment with the functions of the WHO to overcome the dreaded pandemic. Matters relating to cybersecurity was also included in the heart of the US’s foreign policies.

The “additional” policy upgrade focused on major humanitarian crisis all over the globe. Beginning with Yemen’s Civil War, Biden congratulated Tim Lenderking, who has been appointed as the new US envoy to Yemen. This step is a drive towards making diplomatic resolutions and “push out conflict”. The administration has also called upon the Middle Eastern allies to facilitate and cooperate in stabilizing the region, whilst offering better diplomatic prospects between the region and the US. Biden declared USAID to be provided to the Yemeni people suffering as an outright effect of the war. He also extended his support to Saudi Arabia in defending “its sovereignty, its territorial integrity and its people” against the missile activities undertaken by Iran.

Biden-Harris administration solemnly affirmed their commitment towards working in unison in recognizing the LGBTQI community internationally. The US will set an example in advocating equal rights to them and extend these rights to all LGBTQI communities across the globe. He further emphasized, “we’ll ensure diplomacy and foreign assistance are working to promote the rights of those individuals, included by combatting criminalization and protecting LGBTQ refugees and asylum-seekers.” The issue of the global refugee problem was addressed with an announcement in an increase of people seeking refuge in the US. He confirmed how domestic policies of the country will set an example internationally. “There’s no longer a bright line between foreign and domestic policy. Every action we take in our conduct abroad, we must take with American working families in mind,” he added. Biden also promised to work against white supremacy and systematic racial oppression, recalling the George Floyd incident which stirred how racial behaviours continue to operate till date.

The speech ended with remembering former US Presidents’— Harry Truman and Eleanor Roosevelt, he drew the attention towards America’s stride in diplomacy and that it is time again for the country to take the centre stage in global affairs. Underpinning his vision, Biden stated, “We are a country that does big things. American diplomacy makes it happen. And our administration is ready to take up the mantle and lead once again.” The revival of the US will be a daunting effort for this administration, but would that be a sign of perturbation for India?

Given there was no mention of India under the closest ally of the US, it would be significant for New Delhi to monitor Washington’s steps carefully. The Trump administration glorified Indo-US relations, but the undoing of his policies by Biden could be an alarming signal for India to brush up its policies towards the West and vice versa. However, one advantage that this new foreign policy might serve to New Delhi is the position Biden’s administration is willing to take upon China. The border disputes and the growing presence in and around India are disturbing, but holding the US’s policy anchor towards the Chinese can to some extent assist and facilitate India to take a role in South Asia. The stimulation of India’s foreign policy towards the US must align and take in cognizance Biden’s vision of ‘America is back.’

“When we strengthen our alliances, we amplify our power as well as our ability to disrupt threats before they can reach our shores,” reminds Biden to his countrymen and allies. It is expected of India to work and rework its foreign policy with the same optimism and ethos.