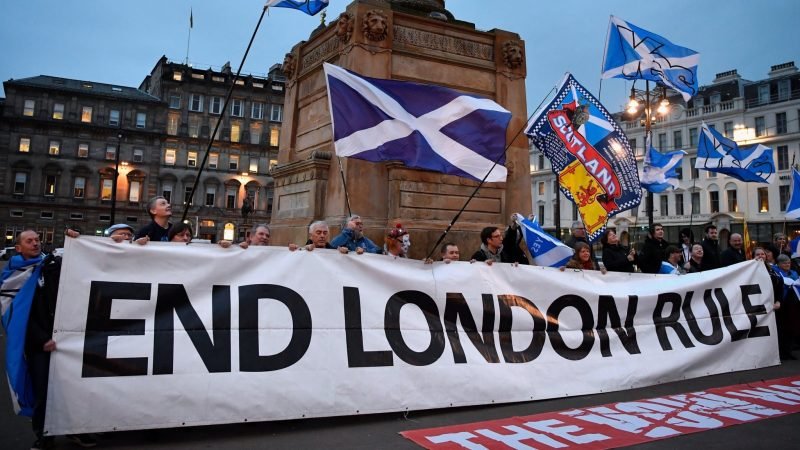 Scottish nationalists are pushing for an independence referendum to be held after this May’s Scottish parliament election, but British Prime Minister Boris Johnson has said such votes should happen only once in a generation.

In a referendum in 2014, Scots voted 55%-45% to remain in the United Kingdom, but both Brexit and the British government’s handling of the COVID-19 crisis have bolstered support for independence among Scots, and demands for a second vote.

The first step to a referendum is victory for the ruling nationalist Scottish National Party in the election of a Scottish Parliament on May 6. Surveys suggest they are on course to win a clear majority.

Scottish First Minister Sturgeon, who is also SNP leader, has said she then wants to put a bill before that parliament for a referendum to be held “in the early part of the new term”.

What would a referendum mean?

If Scots voted to leave, it would be the biggest shock to the UK since Irish independence a century ago – just as all of the UK grapples with the impact of Brexit, a move that Scotland’s voters strongly opposed.

The nations of Britain have shared the same monarch since 1603, when King James VI of Scotland became James I of England. In 1707, a formal union created the Kingdom of Great Britain.

Under the 1998 Scotland Act – which created the Scottish parliament and devolved some powers from Westminster – all matters relating to the “Union of the Kingdoms of Scotland and England” are reserved to the UK parliament in London.

Westminster can grant the Scottish government the authority to hold a referendum using a so-called “Section 30” order, a process that was used to allow the 2014 plebiscite to go ahead.

In effect, that gives Johnson the say on whether or not Scotland gets a referendum.

Will permission be given?

In January 2020, Johnson refused Sturgeon permission to hold another referendum, saying the 2014 vote had been a “once in a generation” event, and he has ruled it out repeatedly since.

The SNP says that, if it wins the election in May, Johnson will have “no moral or democratic justification” to refuse it another referendum.

If he does again say “No”, the SNP says the Scottish government would push ahead with passing a referendum bill in the Edinburgh parliament, and that Johnson would have to go to court to “block the will of the Scottish people”.

Before any Scottish bill is enacted, it can be referred to the Supreme Court, the UK’s highest judicial body, to decide whether it exceeds the Scottish parliament’s powers under the Scotland Act.

It is almost certain that a referendum bill, if passed without explicit permission and over the opposition of the British government, would be referred.

Judge David Hope, former deputy president of the Supreme Court, said the Scotland Act was a major constraint on the Scottish government: “They are trapped within a statute which is very carefully drafted.”

Others think it is not so clear-cut. “There are respectable arguments for saying that a referendum bill would be within devolved competence,” said Professor Aileen McHarg, an expert on constitutional law at Durham University.

The question of the need for a Section 30 order, and the Scottish government’s ability to hold a referendum without London’s permission, is already being tested in the Scottish courts.

Edinburgh’s Court of Session said on Friday, Feb. 5, that a case brought by independence campaigner Martin Keatings was premature, and declined to rule on the legal issues it raised.

Keating said he would appeal, and the case could ultimately end up in the UK Supreme Court.

If a proposed referendum were blocked by Johnson and the courts, some in the SNP say the Scottish government should press ahead regardless, with an indicative vote.

But others in the party and legal experts say that, because the legitimacy of such vote is questionable, opponents of independence would simply boycott it, and so undermine its credibility.

“Without a statutory underpinning, it seems to me to be a complete non-starter,” McHarg said.