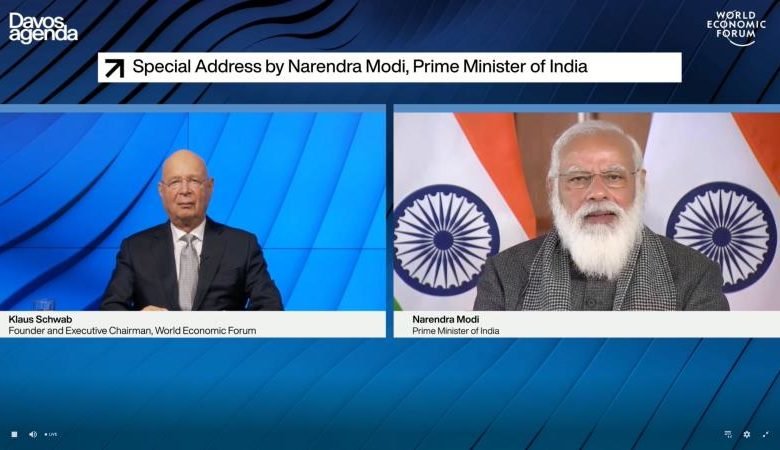 The World Economic Forum hosted the annual meet virtually and the Indian Prime Minister, Narendra Modi made terrific remarks and promises at the international platform. The PM began with congratulating the international organization for hosting the event despite all odds, he stressed on the challenges which lie ahead for every country. The ulterior motive for every nation is to rebuild their economies in the post-COVID world and that rebuilding will require joint efforts from every nation. Prime Minister stressed that India has emerged as an exemplary country in terms of fighting the raging pandemic. He mentioned, “When COVID-19 arrived, India had its share of problems. At the beginning of last year, several experts and organizations had made several predictions that India would be most affected by the pandemic. Someone had even said that 700-800 million would be infected and someone had said that over two million Indians would die from the pandemic. Looking at the condition of countries with better health infrastructure, the world was right in worrying about us.” But the Prime Minister confidently remarked on how the speculations not only turned out to be false but how India took the centre stage for vaccinations.

Stressing on the vaccination drive undertaken and implemented by India, Modi highlighted how ‘public participation approach’, ‘testing and tracking’, ‘training of human resources’ and the ‘patience’ showcased by the citizens have helped India reach the stages for conducting the vaccine drive. Given the fact that India is still a developing country, it has been successful in beating all odds which the pandemic posed. He stressed that how at the beginning of the pandemic India was importing PPE kits, masks and medical equipment only to be the leading exporter of the same by the end of the year. The mobile health infrastructures and public distribution have helped the country serve what constitutes to be the world’s 18% of the total population. The vaccination drive or diplomacy carried out by India stresses on the country’s march towards ‘Atmanirbhar Bharat’ and PM Modi highlighted that the credential of this policy is a push for “global good providing for the global supply chain.”

The adversity of the pandemic is correlated to the economies of nations. Reviving and rebuilding is the priority for all. Prime Minister Modi reiterated the point and said that economic situations are bound to change. Despite the heavy crackdown on economic growth, India during the lockdown was able to spend trillions on the public health sector and new projects related to infrastructure were signed. Referring to ‘Industry 4.0’ which is famously known as the industrial revolution centred around automation and data, Prime Minister Modi said that Industry 4.0 for India will be based on connectivity, automation, artificial intelligence and real-time data. He further added how India has become the biggest hub for data implying the connectivity campaign even in the rural areas. Digitalization surely becomes a significant catalyst for development and growth. Prime Minister Modi boasted about the UPI payments recorded last year. These UPI payments amounting some 7 billion dollars indicate digitalization of the Indian economy. He further added that the growth rate of digitalization in the country becomes a significant matter for the World Economic Forum to study and research.

India’s developmental policies are now aligning smoothly to cater to issues of climate change. The severe pandemic has helped India establish itself as a global competitor. The public health sector which tops the government’s priority list is set for some reforms. PM Modi declared the ‘Unique Health ID’ campaign is under process. This measure will facilitate better public service delivery, transparently and efficiently. He concluded commenting that India is all set to produce more vaccines and the successful growth of the country will align to push the international order towards prosperity in the post-COVID era.