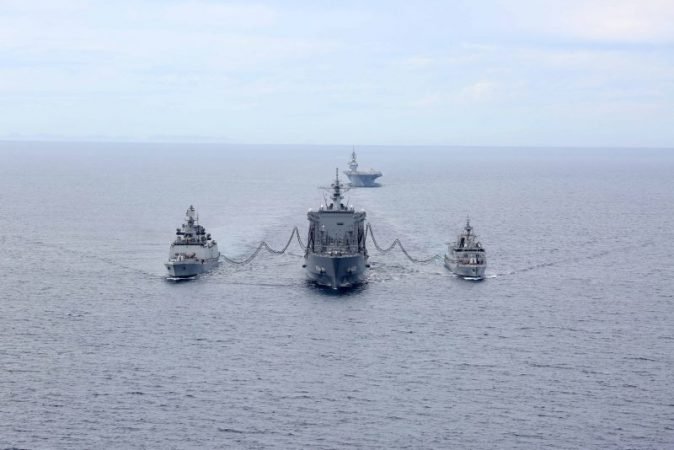 Exercise Malabar began in the year 1992 as a bilateral exercise between India and the United States. Japan became a permanent partner in the year 2015. Singapore used to join the exercise once in a while. In the year 2020, subject exercise has become a quadrilateral naval exercise involving the United States, Japan, Australia and India as permanent partners. The exercises generally comprise manoeuvres and drills among naval warships, submarines and naval aircraft.

Malabar Naval Exercise 2020 in its new Avatar is meant to showcase QUAD’s (India, US, Japan and Australia) resolve to dominate the Indo-Pacific high seas. The exercise focuses on joint operations among the participating countries to display the sea prowess. Growing Chinese assertiveness has been a matter of concern for many countries including the QUAD partners. Participation of Australian Navy this year has redefined the strategic sea alliance and India has played a key-role in bringing Australia on board for this joint exercise.

China has expressed its obvious discomfort with the informal coalition of four democracies in the year 2004, to help tsunami affected nations in Indo-Pacific. The coalition went into a hibernation for a long duration since then, but got revived in 2017. According to Australian defence minister Linda Reynolds, Malabar 2020 marked a milestone opportunity for the Australian Defence Force (ADF). “High-end military exercises like MALABAR are key to enhancing Australia’s maritime capabilities in building interoperability with our close partners and demonstrating our collective resolve to support an open and prosperous Indo-Pacific,” Reynolds was quoted as saying by news agency PTI.

An editorial in a leading newspaper HT, dated 19 Oct 2020 has very rightfully summed up the purpose of Malabar Exercise as “There is now a consensus, among every major liberal democracy in the world, that China is a threat — to political systems and open societies, economic self-reliance, and a rules-based regime, particularly in the international seas. India has traditionally sought to hedge its bets in larger geopolitics, but it does not have the luxury to do so anymore, because of its geography. The fact that India today faces Chinese aggression makes it incumbent on New Delhi to explore and deepen every international alliance which can serve as a source of symbolic and substantive support, including in the maritime domain where China has obvious vulnerabilities.”

India has traditionally sought to hedge it’s bets in larger geopolitics, but it does not have the luxury to do so anymore, because of it’s geographic location. The current Chinese aggression makes it incumbent on New Delhi to explore and deepen every international alliance which can serve as a source of symbolic and substantive support, including the maritime domain where China has obvious vulnerabilities.

Let us hope Malabar-2020 ushers an era of peace, stability and economic well being for countries in the Indo-Pacific region.

Commodore SL Deshmukh, NM (Retd), is a Distinguished Senior Fellow with DRaS, has served Indian Navy for 32 years. He is a Mechanical Engineer is specialised in both Marine & Aviation domains. He also holds a Masters in Defence Studies and a Postgraduate in Management. He has served onboard aircraft carriers and is specialised on fighter aircraft and ASW helicopters. He held many operational and administrative appointments including Principal Director at Naval HQ, Commodore Superintendent at Naval Aircraft Yard, Director, Naval Institute of Aeronautical Technology and Project Director of a major Naval Aviation Project. He is alumni of Defence Services Staff College Wellington. He was with Tata Group for 5 years and is currently working with SUN Group‘s Aerospace & Defence vertical as Senior Vice President. He is also a Life Member of Aeronautical Society of India.