Role of UN Observer Mission: Experience of cold war peacekeeping and relevance in the Ukraine crisis 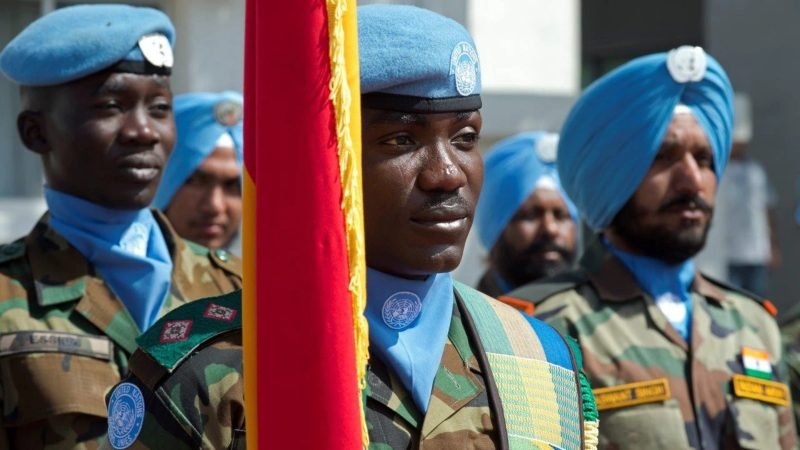 Earlier, I wrote about the option of UN peacekeeping as a solution to the ongoing conflict in Ukraine[2]. Even though an opportunity for preventive diplomacy has been lost due to inaction on part of the UN from February 2021 until the beginning of the invasion in February 2022, the latest initiative of the Secretary-General to meet both President Putin and President Zelensky has brought in some hope. As it appears, Russia has agreed in principle to a UN role and Red Cross in evacuations from Mariupol[3]. It was only about the evacuation of the civilians. But it might also open the way for more involvement of the UN in the future in case both sides agree to end the conflict and ceasefire. If that happens, there will be a need for some neutral organization to see that the ceasefire is holding on by observing, monitoring, and deconflicting instability because of animosity and lack of trust between the opposing sides. UN peacekeeping is one of the options. But the question is how and in what form. For this, it will be good to visit our experiences of some of the traditional peace operations.

In this regard, Dr Novosseloff has brought to light an interesting theme by questioning the relevance of some of the older UN peace operations. She also observed that these missions have managed to prevent outbreaks of violent conflict at the tactical level. Referring to the ongoing conflict in Ukraine, her impression is that if the UN peacekeeping mission is called to help to monitor and implement the eventual agreement, it will be an observer mission[4]. Novosseloff made her point after the comparative study of some of the older missions. However, the feasibility of an observer mission in the Ukraine conflict can be examined better when compared with UNIFIL in slightly more detail (this has been mentioned briefly in the study). UNIFIL is one mission that could not prevent the 2006 war in its avatar then (which had no element of peace enforcement), and then became a heavy, well-armed mission consequent to SCR 1701. So, the need to examine the efficacy of UNIFIL post-2006 in light of possible requirements to monitor the next inter-state violent conflict where the UN might have a role becomes necessary.

Before using the example of UNIFIL, it is important first to evaluate the performance of UNIFIL The mandate of UNIFIL SCR 1701 is different from its earlier mandate. In addition to the mandates under UNSCR 425 and 426 (1978), UNIFIL’s mandate under SCR 1701 includes the following tasks[5]:

The mission has a strong force structure with three European Troop Contributing Countries (TCCs) deploying their soldiers who are equipped with heavy armaments like main battle tanks and artillery which is rare in the UN peace operations. Barring a few tasks, UNIFIL is generally in an assistance role. Monitoring the cessation of hostilities and ensuring that the AO is not utilised for any hostile activities are two primary mandates of UNIFIL. The mandate also has a protection of civilian (PoC) element. Most of the local population in South Lebanon supports Hezbollah. Hence, they are less vulnerable to any internal threat like other intra-state conflicts but more exposed to threats to life during a conflict between Israel and Lebanon. Even though UNIFIL has plans to provide shelter to the civilians under threat during the war, how effective this arrangement would be is difficult to predict. A lot will depend if the UN bases itself on becoming the casualty of war (maybe as collateral) or on the position of the TCCs on the continued deployment of their peacekeepers during an all-out war. That apart, despite the several tasks, the mandate, in general, is that of conflict management by a peacekeeping mission under Chapter VI of the UN Charter. In this regard, as mentioned by Novosseloff, UNIFIL is a status quo mission and both sides seem to be comfortable with the way it is. To Israel, the presence of UNIFIL in South Lebanon is a recognition of the threat from Hezbollah. On the other side, Hezbollah calls itself the ‘Resistance’ of Lebanon and justifies its military wing to defend the sovereignty of Lebanon against Israel. Therefore, the presence of the threat from Israel which is fed by historical reasons and territorial disputes is a good reason for Hezbollah to hold on to its arms. The power that Hezbollah has accumulated over a period based on this narrative is too big for Hezbollah to give up.

Despite that, for several years, UNIFIL has contributed to preventing the outbreak of another major conflict between Israel and Lebanon. Unlike intra-state conflict, a major conflict between Israel and Lebanon has the potential to spread across the region with far-reaching consequences for the world. To this end, the presence of UNIFIL has brought stability to the region and ushered in negative peace. It was Johan Galtung who first talked about negative peace. He explained that peace has two sides: the absence of personal violence and the absence of structural violence. He referred to these as negative peace and positive peace respectively.[6] Similarly, Salvatore and Ruggeri define negative peace as the absence of violence.[7] Even in Bove, Ruffa, and Ruggeri’s concept, the central variable of peacekeeping effectiveness, is “‘negative peace’: a decline in civilian victimization and battle-related deaths.”[8] Accordingly, as observed and indicators identified by Walter, Howard, and Fortna, — reducing and preventing violence from recurrence, containing its spread within and across the borders, reducing civilian and military deaths, and making post-conflict settlement easier—UNIFIL has proved to be an effective peacekeeping mission.[9]

However, it is beyond the control of UNIFIL to prevent a major conflict between Israel and Lebanon that can break out as happened in 2006. What however UNIFIL can do is to prevent those incidents near the Blue Line (BL) that have the potential to escalate to a major conflict.[10] So far, it is UNIFIL’s quick response to such incidents from the peacekeepers in the immediate vicinity combined with UNIFIL’s liaison and coordination mechanism including tripartite meetings that have helped to remove misunderstanding between both sides and prevent the incidents from escalating out of control. Some of the incidents are accidental while a few are intentional.

Along the 125 km of BL and overall area of operation of 2560 sq. km of UNIFIL, there are 24 posts along the BL. The peacekeepers from these posts are the first responder to all flashpoints. The strength of the posts varies, and peacekeepers are armed. Whenever there is any incident in and around the BL, the peacekeepers from the closest post rush to the spot, investigate, and engage with both Israeli Defence Force (IDF) and anyone who could be involved in the incident and tries to defuse the situation as quickly as possible. Simultaneously, the liaison and coordination team of UNIFIL interact with their counterparts to remove misunderstandings if any. Depending on the seriousness of the situation, even the senior mission leaders including the Head of the Mission/Force Commander reach out to their counterparts if necessary. During the entire procedure, even though the peacekeepers are armed, there was never an instance when the arms of the peacekeepers were brought into any use.  Therefore, UNIFIL’s ability to deconflict a potentially violent situation can be largely attributed to the quick response by the peacekeepers at the tactical level by engaging with the parties and less due to the presence of arms. For what UNIFIL is doing, its robust structure is of no value.

UNIFIL is neither mandated nor geared to address the root cause of the conflict which is territorial and is also part of the bigger problem of the area. The question, therefore, is what the large force is doing with such heavy armaments. UNIFIL undertakes operational activities to assist LAF to remove unauthorized arms and groups from South Lebanon.  Hezbollah is not only present but also growing and stature. Besides, other fringe armed groups fire rockets into Israel. UNIFIL has not been successful in any of these. The robust structure is only for self-defence and not to prevent another conflict between two countries. Even for self-defence, the local population of South Lebanon is not afraid of UNIFIL. The presence of the European TCCs is only for political deterrence. On the contrary, armed peacekeepers more importantly if they don’t find acceptance amongst either the host state or the parties to the conflict, can be considered a threat.[11] The presence of arms rather than deterring hence can add to the physical threat to the peacekeepers. Therefore, for observing, monitoring, and mitigating the causes of a conflict, a force much smaller than the current one if supported by advanced monitoring capability and mobility like that of the IDF can better perform their tasks.

In the light of the Ukraine crisis, there appears to be a rethinking of the relevance of traditional peace operations (including unarmed observers and formed armed contingents in the observer role. This was discussed in a round table conference organised by the Effectiveness of Peace Operations Network (EPON) at the UN HQs on 12 May 2022 where I was also one of the panellists.[12] There was a consensus that while the traditional peace operations of the cold war era have become status quo, these are still relevant. Because the consequences of failure of traditional peace operations in inter-state conflicts are far more dangerous than intra-state conflicts.[13] In bringing the experiences of UNIFIL to the crisis in Ukraine, it can be argued that a peacekeeping force like UNIFIL would neither be accepted by both Russia and Ukraine nor would be effective to monitor a ceasefire agreement. Besides, when two nations are at war, to enforce peace or a ceasefire agreement, the peacekeeping force must be stronger and more capable than the militaries of the fighting nations. It is rarely the case. Hence, an observer verification mission comprising peacekeepers from neutral countries supported by a liaison and coordination mechanism is likely to be more successful in overseeing a ceasefire. This thought is not looking at peace enforcement in Ukraine since the intention is not to tangle with Russia. It is opting for a less violent option, i.e., monitoring/peacekeeping in response to Novosseloff’s comments on the feasibility of an observers’ mission if the UN peacekeeping is called for. Consent for such a verification mechanism will always come with conditions. But too many conditions would make the process complicated. To be able to obtain consent with minimal conditions largely depend on the Secretary-General’s influence on the parties to the conflict. However, the size and composition of the mission and modalities will have to be worked out after deliberations by the stakeholders and the field visit by the technical teams. If acceptable to the main parties to the conflict, even a UN civilian observers’ mission in the line of the Organization of Security and Cooperation in Europe’s Special Monitoring Mission (OSCE SMM) is another option worth considering. So far, these observers have performed well.[14]

[4] Alexandra Novosseloff, A comparative study of older one-dimensional UN Peace Operations: Is the Future of UN Peacekeeping its Past?, EPON and FES Cyprus (2022), https://effectivepeaceops.net/publication/a-comparative-study-of- older-one-dimensional-un-peace-operations/

[11] It is my personal experience as an unarmed military observer during the intense intra-state conflict in Angola from 1991 to 92. Many a time, we were intimated (including placing us under house arrest) but the rebels let us free in the end considering us harmless being unarmed.

[13] . Please also see for details about the round table conference https://drive.google.com/file/d/1zU1jsPvrWurUhaj7MNYJ5dgB-jHr0U28/view?usp=sharing

Major General (Dr) AK Bardalai (retired) is a former UN peacekeeper, who earlier served in Angola as an unarmed military observer and was the Deputy Head of the Mission and Deputy Force Commander of United Nations Interim Force in Lebanon (UNIFIL). He is an alumnus of Tilburg University, the Netherlands.